“If your goals do not scare you, they aren’t big enough.”

That was the status line on Lou Moreira’s Facebook page on Oct. 9. He was in Lake Placid, N.Y. — trying out for Team USA Bobsled — at the time.

Eight months earlier, Moreira had been a complete novice. The last sled he’d ridden was an old trash lid down the snowy streets of his childhood home in Somerville, Mass.

“Big, scary goals” pretty much define Moreira, a Trojan on track to earn his master’s degree next May from the USC Marshall School of Business.

Moreira doesn’t look like your average business student, either on paper or in person.

The 32-year-old Army veteran served 27 months of combat duty in Afghanistan as a paratrooper with the elite 82nd Airborne Division. He stands 6 foot 1 and weighs 230 pounds, with not an ounce of fat on his head-turning physique. Last year, Moreira held the title of Mr. Texas in the state bodybuilding championship.

Nothing about Moreira is average, and maybe that’s why the one-of-a-kind Master of Business for Veterans program at the USC Marshall School of Business is such a good fit.

Launched in 2013, the yearlong curriculum is designed to transfer leadership skills acquired in armed service to the business arena.

“We’re all vets,” Moreira said of his 50 classmates. “It’s a common bond, even though we’re from all different branches of service. We get along great.”

The son of Portuguese immigrants, Moreira was an All-American high school hurdler. He landed a full athletic scholarship to Northeastern University, but left after his freshman year to enlist in the Army.

“Something was missing,” Moreira said of his experience as a student in 2006. “It just didn’t seem right. Watching the Afghanistan war and Iraq, I wanted to be a part of it.

His father had been a paratrooper in Portugal, and after basic training, Moreira signed up for airborne school. He met his future wife at Fort Bragg. Both served six years in the 82nd Airborne Infantry, rising rapidly to the rank of staff sergeant. Though assigned to different companies, they occasionally saw each other in Afghanistan.

In 2007, Moreira was at the battle of Musa Qala, a pivotal victory over the Taliban. He describes that first 15-month deployment, mostly spent in remote villages searching for insurgents, as grueling.

“We were getting into fights nearly every day,” he recalled. Despite numerous close calls, his unit took few casualties.

Even in the remote Helmand desert, Moreira managed to focus on fitness. He started reading bodybuilding magazines. During downtime, while the other guys played video games, he lifted weights. 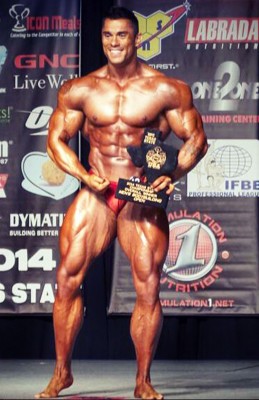 By the time his service ended in 2012, Moreira was “built.” Returning home, he married Baker, and the couple settled down in Dallas, where they resumed their college education at Southern Methodist University.

Moreira majored in applied physiology and sports management. Baker, now a project manager in the oncology department at the Medical Center of Plano, studied marketing and culture.

In their spare time, the couple trained and competed in amateur body building shows. Moreira’s medals started piling up, but after winning the 2014 Mr. Texas title in the overall and super heavyweight category, he decided against going pro.

“I wanted to be an athlete again — a teammate, part of something big,” he said.

So he switched to bobsledding.

An old high school friend had been raving about the sport for years, and when Moreira got a chance to try it — at the national championships last March — it was love at first ice. After seven test runs down the track, he logged his first official race.

“I crashed,” he said, with a laugh. “But even with the crash, I really loved it.” 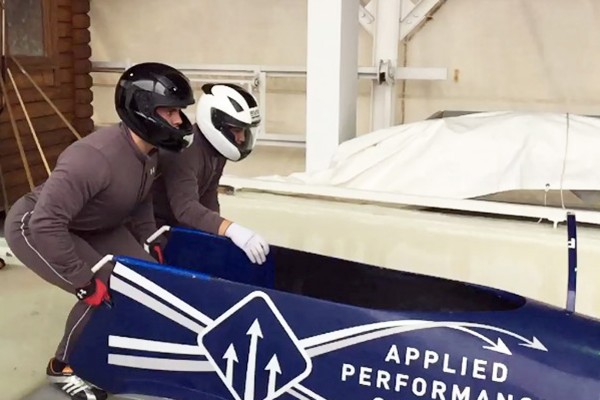 Moreira trained as a bobsledder in Lake Placid. (Photo/courtesy of Lou Moreira)

He’s been training hard ever since for the job of brake on the two-man sled and push on the four-man sled. He had to burn 35 pounds of muscle off his bodybuilder’s frame to reach the ideal bobsledding weight. Access to ice wasn’t necessary.

After advancing through a series of combine events, he was one of 30 finalists invited to spend a month at the Team USA Bobsled training facility in Lake Placid. On Oct. 26, he learned that he had earned a berth on Team 4. His rookie season on the North America Cup circuit is taking place in Calgary.

He’s also focused on finishing his MBV degree — the springboard to a future career in sports performance.

Among other things, the MBV program has prepared Moreira to market himself.

“Half our curriculum is entrepreneurial studies,” he said. “The professors are great. Any idea you have, they break it down and help you develop the best way to go about it.”

As Veterans Day approaches, Moreira reflected on his journey.

“I feel really grateful because of the GI Bill,” he said. “It has really set up my life and my wife’s life. It really feels like the government has given me something to build on, furthering my education, having these opportunities.”

“There’s a tremendous amount of predictability in the military that really doesn’t necessarily translate into the civilian professional world,” says James Bogle, director of USC’s Master of Business for Veterans program.