Innovation extends beyond the “how” and “what,” according to The Walt Disney Co.’s Bob Iger: “Where” is also an essential part of the equation. And right now, China is where it’s at.

“It’s not just large, but very dynamic,” said Iger at the 2015 USC Global Conference in Shanghai. “Fortune 500 companies today are looking to China for growth. It’s a very exciting place for growth.”

Iger, Disney’s chairman and CEO, was featured in a conversation with Willow Bay, director of the USC Annenberg School of Journalism, during the first full session of USC’s biennial leadership conference. 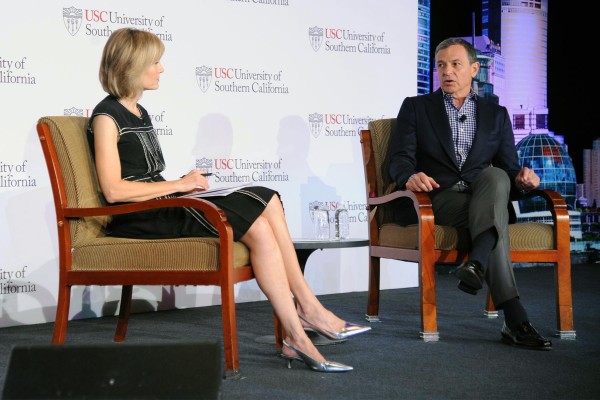 Bay covered a wide range of topics in her interview of the iconic CEO, from the design and construction of the new Shanghai Disney Resort scheduled to open in 2016 to the globalization of Disney’s content and brand.

For the last 10 years, Iger has directed Disney’s growth based on three key priorities: creativity, global growth and innovative technology.

Key investments in quality content – Pixar, Marvel and Star Wars among them – have enabled the company to expand its library of great stories that people love. Technology – when viewed as an opportunity and not a threat – has enabled the company to reach more people with that content and make the product better.

“People love great stories. We try to tell stories that touch their hearts,” said Iger. “Innovation is critical, but telling great stories is where it starts. People tend to overthink that.”

According to Iger, the $5.5 billion Shanghai Disney Resort may be the best example of those three priorities in a single implementation.

“Our goal was to make it distinctively Disney and authentically Chinese,” said Iger.

Distinctively Disney means that the company brought rich content and quality standards to the process, but authentically Chinese in that it worked to bring the stories alive through a local lens and adapted the construction process to embrace cultural differences.

Local storytellers were given a traditional Disney story and asked to break it down and retell the story from a Chinese perspective so it better resonates with local guests. Those stories are delivered using the latest technology to further enhance the guest experience.

Other unique aspects of Chinese culture have influenced park design.

With Hong Kong Disneyland, we discovered that people wanted to spend twice as long eating as we estimated, so we had half as much seating as we needed originally.

“With Hong Kong Disneyland, we discovered that people wanted to spend twice as long eating as we estimated, so we had half as much seating as we needed originally,” added Iger. “With the Shanghai park, we expect more multi-generational visits, so we’ve planned the park around that expectation.”

Likewise, the construction process is built on Disney’s standards for safety and quality. And movie night for the thousands of workers who live on site has evolved to include karaoke because that’s what the employees want. Those programs help with employee retention.

“If you treat employees well, they want to stay,” said Iger.

When asked what is his favorite part of the new park in Shanghai, Iger responded, “More than anything, I can’t wait to share it with the world.”

Technology, nuclear power are driving issues in the Russia-Ukraine war

USC experts discuss how tech-driven globalization and energy are front and center in Russia’s war on Ukraine.