Some of USC’s brightest young entrepreneurs demonstrated their knack for ingenuity at the USC Stevens Student Innovator Showcase, an annual competition held during Trojan Family Weekend.

Twenty-four teams of students, each with their own startup concepts, competed for awards at the ninth annual event on Oct. 23.

The winner of the $7,000 USC Stevens Most Innovative award went to Athelas, the startup that developed a portable blood analyzer that can deliver a complete blood count within minutes.

The company’s co-founder, USC Viterbi School of Engineering student Deepika Bodapati, said she and her team plan to use the funds to build a production-grade prototype and kick off the U.S. Food and Drug Administration approval process for their technology.

Loanmentum earned $7,000 for Best Business Concept, an award sponsored by the Diem Shotwell Metcalfe Family Fund of the USC Marshall School of Business. Loanmentum is a software development company that creates a Carfax-like report for lenders.

The funds will enable Loanmentum to get the company off the ground and help with sales and marketing at trade shows, said Jeff Loo, its chief business officer and a USC Marshall student.

“There is no shortage of great ideas at USC … and it’s encouraging to know that the school has the resources, network and commitment to seeing new businesses flourish on campus,” Loo said.

For the creation of software that screens infants for retinopathy of prematurity which can cause blindness, OptDx the Daniel Floersheimer Global Impact award, a new prize funded by a USC donor to honor the project with the greatest potential to benefit society. 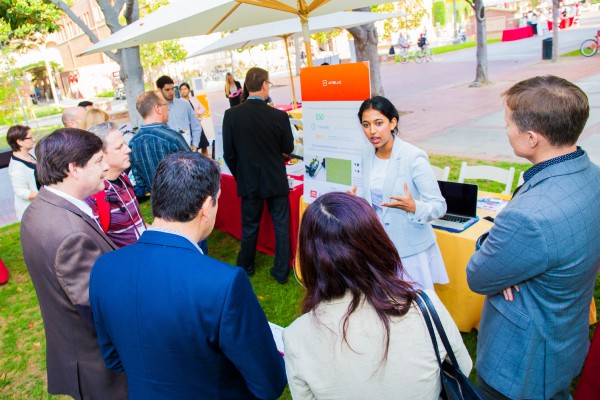 SuppNow (in-gym nutrition supplement vending machines) and iAssay (medical diagnostics) each won $2,500 for awards honoring Venture Validation and Most Potentially Disruptive, respectively. The awards were sponsored by the Lloyd Greif Center for Entrepreneurial Studies at USC Marshall and the USC Marshall Center for Global Innovation.

Labyrinth AUTOelectronics won $1,200 for the Trojan Family Choice Award, the one prize voted upon by attendees at the event. The company has developed a vehicle identification technology that allows details to be exchanged automatically during a collision.

“We applaud all the students who competed in this year’s Student Innovator Showcase,” said Lisa Andaleon, USC Stevens director of operations and senior business officer. “They truly represent the next generation of USC entrepreneurs.”

The mission of the USC Stevens Student Innovator Showcase is to maximize the translation of USC research into products for public benefit through licensing, collaborations and the promotion of entrepreneurship and innovation. The event has distributed $86,400 in prizes since it began in 2007.

Five of the 10 new companies coming out of the business accelerator have raised nearly $6 million in follow-on capital.

Entrepreneurs look for a leg up with startups

Ten-week accelerator at USC Marshall aims to push budding businesses to the next level.