Delicately cut paper represents a tightrope walker crossing the rooftops of New York City’s Twin Towers, as in the novel Let the Great World Spin. Life-size concrete hands reach out in various poses, illustrating the emotional states of Holden Caulfield in The Catcher in the Rye. A painting of a young boy running down an empty school hallway is a moody scene inspired by Fahrenheit 451.

These and other works of art created by USC students have transformed The Writing Center into an art gallery.

Chrystal Li, an environmental studies major with a minor in communication studies, recreated the pivotal scene from Let the Great World Spin by carefully cutting the illustration into a sheet of red paper with an X-Acto knife. Her artwork emulates traditional Chinese paper cutting in which an intricate image is created from a single piece of red paper. She hopes the work will both inspire and calm students who visit The Writing Center.

“People whose stories have been told throughout the book come together to witness this scene,” she said. The book doesn’t sugarcoat their individual experiences, which vary from gritty to heartbreaking, she explained, but for one moment in the day they can watch something extraordinary.

“If students come in and they’re stressed out about their writing, I hope they’ll see this and think everything is OK,” Li said. “Let the great world spin.”

The Writing Center, located on the second floor in Taper Hall of Humanities, is a free resource where consultants work with students in any stage of the writing process during one-on-one meetings or in group workshops.

When the center moved to its current space a few years ago, the newly painted walls were sparse. Last spring, administrators invited USC students to decorate the walls with original works of art inspired by literature. 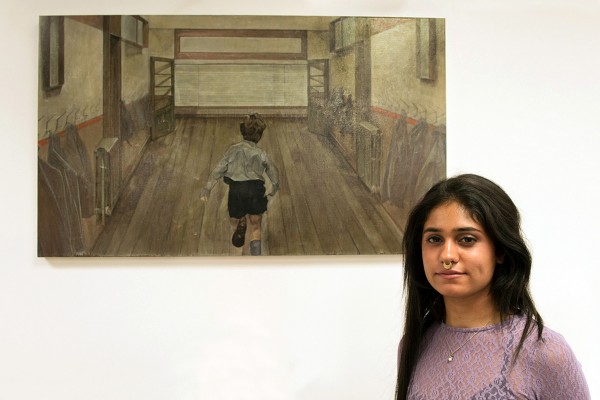 Five students were selected from a pool of 22 applicants: Li, Crystal Liu (fine arts), Jose Alejandro Medina (architecture), Joshua Ramirez ’15 (fine arts) and Ruthy Sarwhal (neuroscience and fine arts). Each received a commission of $500 for their work. The project was sponsored by the Provost’s Office of Undergraduate Programs, the USC Dornsife Office of Academic Programs, the USC Writing Program, the USC Roski School of Art and Design, and Phi Kappa Phi All-University Honor Society.

“The notion was, ‘How do our students imagine some vision of spaces that texts of some kind could take them to?’” said Richard Fliegel, associate dean for undergraduate programs at the USC Dornsife College of Letters, Arts and Sciences. He addressed the crowd at a reception held for the artists on Oct. 20 in the newly adorned Writing Center. “We asked them to respond in each case by a proposal that was inspired in some sense by something they had read. The responses were much richer than we could have imagined when we began.”

Students created the artwork over the summer and had the benefit of receiving guidance from Margaret Lazzari, vice dean of fine arts and professor of fine arts in the USC Roski School of Art and Design. Lazzari was also part of the committee that selected the artists.

I think this opportunity for our students is really wonderful.

“As someone who teaches art, I’m appreciative when people give artists opportunities to put their artwork someplace and really work with them so that it’s an entirety of an environment — a really thoughtful installation that’s meaningful not only to the artists who put it up, but to the people who use the room,” she said. “I think this opportunity for our students is really wonderful, and I have to say, they rose to the occasion. I’m incredibly proud.”

Ramirez, a McNair Scholar and a Norman Topping Scholar who earned his bachelor’s degree in May, created the sculpture of three hands inspired by J.D. Salinger’s The Catcher in the Rye.

“The character of Holden Caulfield really resonates with me,” Ramirez said. “I wanted to represent him in a very special way.”

One hand is open to show how Caulfield pushes people away. Another is softer to show how he is gentle. The third is in a fist to represent his anger. Ramirez used concrete to cast the hands — molded from the hands of his father — as another way to show variation in the character’s temperament.

Geoffrey Middlebrook, director of The Writing Center and USC Dornsife professor, said he is very pleased with the outcome of the call for art.

“The artists, the media and the themes are so diverse,” he said. “We have domestic and international student artists, males and females, sculpture, cut paper, photo collage and oil on canvas.”

Middlebrook said he is grateful to the students for their work and for the sponsors for making the project possible. He also invites everyone to come by and admire the artwork at their leisure.

“After all, this is a gallery now,” he said.