Scientists have found a new function of the nuclear membrane, the envelope that encases and protects DNA in the nucleus of a cell — it fixes potentially fatal breaks in DNA strands.

The nuclear membrane previously was thought to be mostly just a protective bubble around the nuclear material, with pores acting as channels to transport molecules in and out. But in a study published on Oct. 26 in Nature Cell Biology, a research team led by Irene Chiolo documents how broken strands of a portion of DNA known as heterochromatin are dragged to the nuclear membrane for repair.

DNA exists inside of a cell’s nucleus in two forms: euchromatin and heterochromatin. Euchromatin gets the attention because it encodes most of the genome, while heterochromatin, which is mostly composed of repeated DNA sequences, has long been ignored as “junk DNA.”

“Scientists are now starting to pay a lot of attention to this mysterious component of the genome,” said Chiolo, assistant professor at the USC Dornsife College of Letters, Arts and Sciences. “Heterochromatin is not only essential for chromosome maintenance during cell division; it also poses specific threats to genome stability. Heterochromatin is potentially one of the most powerful driving forces for cancer formation, but it is the ‘dark matter’ of the genome. We are just beginning to unravel how repair works here.” 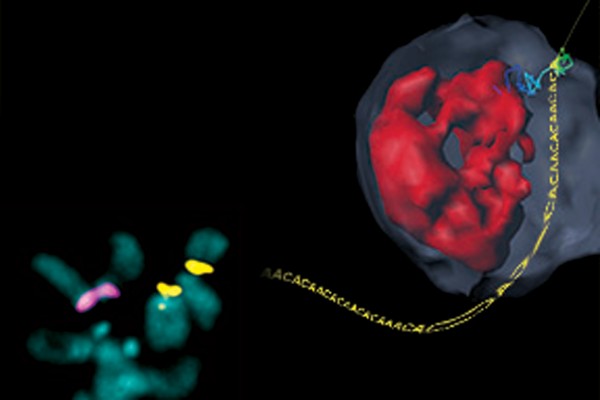 The nuclear membrane previously was thought to be mostly just a protective bubble around the nuclear material. (Illustration/Taeyhun Ryu, Brett Spatola, Laetitia Delebaere and Irene Chiolo)

The reason why we don’t experience thousands of cancers every day in our body is because we have incredibly efficient molecular mechanisms that repair the frequent damages occurring in our DNA. But those that work in heterochromatin are quite extraordinary.

“Repeated sequences tend to recombine with each other during DNA repair,” said Taehyun Ryu, USC graduate student and first author on the study. “This would lead to chromosome aberrations as frequently observed in cancer cells. What prevents these outcomes in normal cells was unclear.

“We knew that nuclear membrane dysfunctions are common in cancer cells,” Chiolo explained. “Our studies now suggest how these dysfunctions can affect heterochromatin repair and have a causative role in cancer progression.”

Working with the fruit fly Drosophila melanogaster, the team observed that breaks in heterochromatin are repaired after damaged sequences move away from the rest of the chromosome to the inner wall of the nuclear membrane. There, a trio of proteins mends the break in a safe environment, where it cannot accidentally get tangled up with incorrect chromosomes.

This study may help reveal how and why organisms become more predisposed to cancer as they age — the nuclear membrane progressively deteriorates as an organism ages, removing this bulwark against genome instability.

Next, Chiolo, Ryu and their colleagues will explore how the movement of broken sequences is accomplished and regulated, and what happens in cells and organisms when this membrane-based repair mechanism fails. Their ultimate goal: to understand how this mechanism functions in human cells and identify new strategies to prevent their catastrophic failure and cancer formation.

DNA of bacteria crucial to the ecosystem defies explanation

‘Sea sawdust’ makes harsh environments more habitable by turning nitrogen gas from the air into a nutrient that other organisms can use.

Taking the gamble out of DNA sequencing

Two USC scientists have developed an algorithm that could help make DNA sequencing affordable enough for clinics — and could be useful to researchers of all stripes.