USC undergraduates Sarah Dhanaphatana and David Moreno have spent a lot of time thinking about how to let their fellow students know that their voices matter.

“Many students and individuals in our generation believe that their vote doesn’t matter and that their voice isn’t making a difference,” Dhanaphatana said.

In fact, only 45 percent of adults age 18 to 29 voted in the 2012 presidential election, according to the U.S. Census Bureau. Millennials — those born between 1980 and the 2000s — are also less likely to identify with political institutions. A recent Pew Research study found that 50 percent consider themselves political independents.

To learn about new ways to get students more engaged in politics, Dhanaphatana and Moreno recently attended the 2015 National Campaign for Political and Civic Engagement conference. The two political science majors at the USC Dornsife College of Letters, Arts and Sciences were selected by the Jesse M. Unruh Institute of Politics to represent the university as national campaign ambassadors at the conference. Their charge is to increase political participation, particularly voter turnout, among millennials.

Hosted annually by the Harvard Institute of Politics (IOP) in Cambridge, Mass., this year’s conference brought together students from across the country to teach them effective ways to promote civic engagement at their respective universities.

USC is a member of Harvard IOP’s National Campaign for Political and Civic Engagement, a consortium of 27 colleges and universities around the country that want to engage and encourage the next generation to improve their communities through bipartisan politics and public service.

This was a tremendous opportunity for our students to further develop their leadership skills.

“This was a tremendous opportunity for our students to further develop their leadership skills and interact with some of the nation’s foremost political engagement experts,” said Dan Schnur, director of the Unruh Institute of Politics. “We are thrilled to provide this experience for two extraordinary USC student leaders, and we are eager to help Sarah and David apply the lessons they’ve learned.”

Both Dhanaphatana and Moreno are actively involved in politics at USC. Dhanaphatana, an editor at the Daily Trojan, serves as assistant director of academic affairs for USC Undergraduate Student Government. Moreno, a USC Dornsife student ambassador, also serves on USG as chief of staff.

Prior to the conference, the two volunteered with the Unruh Institute to hold a voter registration drive on campus in conjunction with National Voter Registration Day on Sept. 22. At the event, which featured California Secretary of State Alex Padilla, more than 500 students registered to vote — more than any other university in Los Angeles County, according to the county clerk’s office.

To the polls — and beyond

In the wake of the conference, Dhanaphatana and Moreno are now drawing up a plan to inspire voter participation that complements the current programs that already exist on campus to engage students in politics, such as the “Students Talk Back” speaker series and presidential debate viewing parties. They hope to galvanize students around the 2016 presidential election.

They’ll share their plan with their peers from the conference and follow up with them throughout the year to let them know how it is progressing. 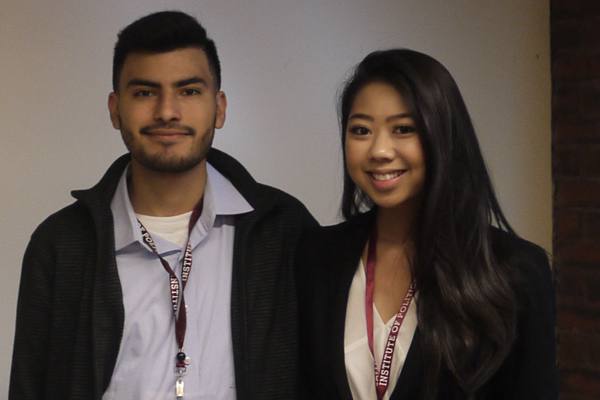 Dhanaphatana said that the conference also reinforced their goal to get students interested in taking their political participation beyond the polls.

“We need to make sure that we’re not only encouraging students to vote but encouraging them to identify a single issue or multiple issues that they’re extremely passionate about and allow them to realize that their voice has a meaning and really can make change,” she said.

“Identifying an issue that they’re concerned about and seeking active change on campus — by talking to students, working with different organizations and pushing them forward with local legislators — is really going to have a significant impact on the political process.”

Moreno said that USC students should realize that they are not just the future leaders of their communities but also current leaders. By engaging in politics, they can bring about positive change.

“A lot of that can come about through the political process — electing people who they know are going to be there for their needs and interests, who look out for the majority and the minority population because everyone is significant and everyone’s voice deserves to be heard,” he said.

How litigation can lead to divided politics

USC political scientist co-authors a book about the dynamic interplay between Congress and the courts.

USC students want millennials to be more engaged in politics