A group of talented young women unite to share their artistic visions, hone their craft and leave a mark on the world, overcoming financial pressures, in-group fighting and creative differences, finally becoming stronger as artists and closer as friends.

Is it the incoming class of the USC School of Cinematic Arts?

No, it’s the new film Jem and the Holograms, directed by Jon Chu ’03, written by Ryan Landels ’03 and shot by Alice Brooks. (The camera operation and gaffing was overseen by Andy Waruszewski ’02 and Jay Muranaka ’07.)  The movie was screened in advance of its Oct. 18 release in the Eileen Norris Cinema Complex and followed by a Q&A attended by Chu, Landels, Brooks, Muranaka and Couper Samuelson, head of Blumhouse Productions.

Chu and many of the film’s crew met as SCA students and have worked together on several projects, including Chu’s award-winning student thesis While the Kids Are Away and the Web series League of Extraordinary Dancers. Chu said that Jem was an extension of their years of collaboration.

What was nice is that we got the chance to come together as a team.

“We had all worked together on different projects but mainly League of Extraordinary Dancers,” he said. “Alice [Brooks] produced my student films, and Ryan [Landels] and I have known each other since the very beginning of our time at film school. When we got the opportunity to do Jem, what was nice is that we got the chance to come together as a team and make a feature with people we were used to.”

From small to big screen

Jem and the Holograms is based on the 1980s Saturday morning cartoon. It is the second Hasbro cartoon Chu has adapted into a film, having previously directed GI: Joe: The Rise of Cobra. Chu was familiar with Jem and had even tried to get a film developed earlier. He finally got his chance after Blumhouse got involved.

“I grew up with five kids and my sisters taped the [Jem] cartoon and played it all the time,” Chu said. “When we played GI Joe, Jem would be one of the figures. I pitched a Jem film 11 years ago. Huge. Over the top. A direct translation of the cartoon. In those 11 years, social media had happened, which really opened up how to tell the story. Everyone now has a public and private persona, which was a main element of the cartoon.” 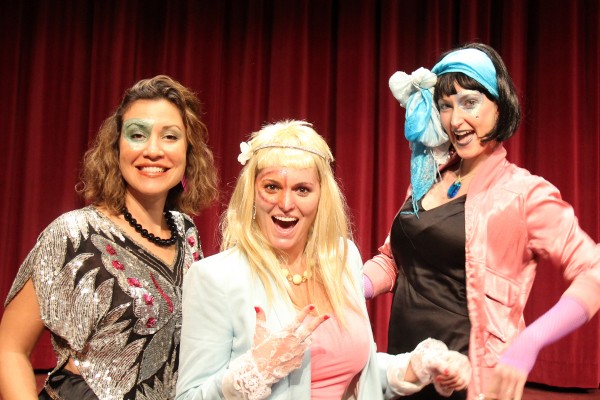 Audence members from the USC preview dress as characters from the film. (Photo/courtesy of USC School of Cinematic Arts)

“The challenge was to tell a story that hadn’t been done a million times,” Landels said. “You’ve seen bands being put together. I wanted to do something grounded about growing up and how it’s different to grow up today. That was the dance. You do crazy things with the band and a robot, but at the end of the day, it’s grounded in reality.”

Blumhouse Productions is a low-budget, auteur-based production company mostly known for horror films. The production budget for Jem was a scant $5 million, which created challenges for the crew.

“We had limited time and limited budgets,” Brooks said. “It was only 24-day schedule. It helped me as a cinematographer because you had to figure out what was really important. We had to pick and choose our moments.”

Jem fits into Blumhouse’s formula of giving filmmakers creative autonomy in exchange for lower budgets. Blumhouse creates a space where filmmakers can make audience-friendly, low-budget films with little to no interference. The company’s films include Paranormal Activity, Ouija, the Insidious series, the Purge series and Whiplash

“We always believe that filmmakers love a mainstream audience,” Samuelson said. “What we’ve found at Blumhouse is that if you leave filmmakers alone, they will make something an audience will like. In a way, Jem is like Paranormal Activity. Paranormal Activity asks, ‘What would happen if Poltergeist actually happened to you?’ Jem is asking, ‘What would happen if a rise to fame actually happened to you?’ With low budget, you can’t compete with car crashes and explosions, so you have to compete by showing reality.”

USC buddies band together for Jem and the Holograms