“A transition from authoritarian rule requires every group to understand that it cannot demand everything it wants. That is a transition: talking with those who think differently, even if they have been defeated.”

This sage advice by Ricardo Lagos, a key leader of the opposition coalition that brought the Augusto Pinochet dictatorship in Chile to an end, appears in the new book, Democratic Transitions: Conversations With World Leaders (Johns Hopkins University Press, 2015), edited by Professor Emeritus of International Relations Abraham Lowenthal and Sergio Bitar, president of Chile’s Foundation for Democracy.

“Lagos’ advice illustrates the distilled political wisdom we derived from interviewing leaders in nine countries in Africa, Asia, Europe and Latin America who played central roles in achieving historic transitions from autocracy to democracy in the last quarter of the 20th century,” said Lowenthal of the USC Dornsife College of Letters, Arts and Sciences.

In the book, the leaders share in their own style and voices what they have learned — drawing from their own experiences — about what makes countries become successful democracies. The hope is that their insights will be helpful to those trying to bring democracy to other countries.

Lowenthal described the project as “perhaps the most complicated and interesting [one] I have undertaken in my career.”

It is a timely and timeless subject.

“It is a timely and timeless subject,” he said. “Developing democratic governance and ending authoritarian rule are live issues because people everywhere want to have a say in how they are ruled.”

Lowenthal joined USC Dornsife in 1984, where he taught international relations with a particular emphasis on U.S.-Latin America relations until 2011. He combined his academic career with institution building, setting up three think tanks — the Wilson Center’s Latin American Program and the Inter-American Dialogue, both in Washington, D.C., and the Pacific Council on International Policy in Los Angeles, which has close ties to USC.

A veteran political leader and public intellectual in his native Chile, Bitar was one of the architects of the transition to democracy following the dictatorship of Pinochet. 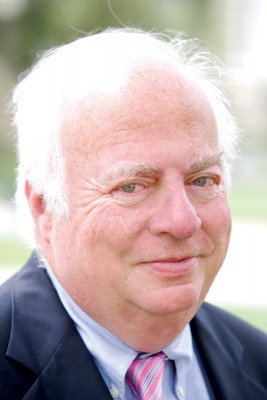 The pair conducted their interviews as a team, speaking with, among others, F.W. de Klerk and Thabo Mbeki of South Africa, Jerry Rawlings and John Kufuor of Ghana, B.J. Habibie of Indonesia, Fidel Ramos of the Philippines, Patricio Aylwin of Chile, and two Polish leaders, Aleksander Kwasniewski and the late Tadeusz Mazowieki. Their subjects also included Ernesto Zedillo of Mexico — the only interview Zedillo has ever granted about his role in the democratization of Mexican politics.

“It was unprecedented and not easy to arrange, but once he agreed to participate in this project, he was extremely helpful and gave us a wonderful interview,” Lowenthal said.

“It was quite a dazzling performance, and there was a lot of very interesting detail,” Lowenthal said.

In their interview with Felipe Gonzalez, Lowenthal noted that the Spanish leader had commented on the importance of certain qualities of political leadership and asked him how those qualities are acquired. Are they innate or are they learned, and if the latter, how and where?

“Gonzalez said they are definitely not learned in school, but in practice, by struggling with how to apply general principles to distinctly different situations. So I asked him, ‘Where do you get the general principles from?’” Lowenthal said. “He replied, ‘You get them mostly from the narrative of previous experiences.’ He could not have better stated the rationale of our project.”

So what can be learned from each leader’s experience?

“Given the diversity of the countries involved, we learned that there is no cookie cutter approach or possibility of having a detailed guidebook of best practices that you can simply apply as a cookbook in some future situation,” Lowenthal said.

However, he and Bitar became convinced that there are a series of recurrent dilemmas and challenges that arise even in such diverse situations. The book identifies a number of these at the various stages of transition, from preparation to the actual transfer of power, to the institutionalization of the practice of democratic government.

The essence of leadership, Lowenthal said, is to understand these recurrent problems and to think through and work on how to resolve them.

One such challenge is how to handle the issue of transitional and restorative justice.

“That is how you deal with human rights violations and repression and torture on the one hand, without reopening wounds and making it impossible for the authoritative regimes to consider leaving power for fear they will be persecuted,” Lowenthal said. “These are tough questions that come up in most of these transitions in one form or another.”

As all the leaders interviewed were men, the editors commissioned an analytic chapter on the role of women in the same nine democratic transitions, prepared by Georgina Waylen of the University of Manchester in the United Kingdom.

For those curious to get a more in-depth flavor of the book, Lowenthal and Bitar have distilled what they see as the main imperatives of democratic transitions into an essay for the January 2016 issue of Foreign Affairs, the leading journal for analysis and debate of foreign policy, economics and global affairs.

Participants include leaders of community groups from countries where terrorists have been active over the years.