Former Los Angeles Mayor Antonio Villaraigosa and the USC Price School of Public Policy held a public round table with a discussion on creating a 21st century educational system. The event was part of a collaboration called California Central.

“Education is not only the economic issue of our time, it’s the civil rights issue of our time,” Villaraigosa said in his remarks at the Sept. 28 event held at Town and Gown. “You can’t succeed when you have staggering opportunity gaps between rich and poor, and between ethnic groups. It’s a moral and economic imperative when more than half of our students have dramatically lower outcomes and are not prepared to advance to college or enter the workforce.”

Education will be one focus of California Central, which will draw on the talents of USC faculty and students to explore how public policy can help Californians succeed in the areas where key paradigm shifts are shaping its next century.

We seek to advance sound leadership and sustainable solutions during a critical phase of our state’s development.

“Through our new California Central-USC Villaraigosa Initiative, we seek to advance sound leadership and sustainable solutions during a critical phase of our state’s development,” said USC Price Dean Jack H. Knott. “California is one of the most important states and economies not only in the country but worldwide. Yet we’re a state undergoing significant transformations.”

“There are many issues that affect California, but the issues we’re honing in on are the ones nested within our greatest and most rapid changes, and present the most trenchant opportunities for our continued evolution toward the success we’ve always represented in this state,” said Paula Daniels, executive director of California Central.

USC Price Professor Dowell Myers presented a frame for the panel discussion with a presentation on demographic trends that belie a long-standing narrative that California faces overwhelming population growth. Los Angeles County has seen a drop of 17 percent and California 4 percent of youth under age 10 in the past decade.

The ratio of seniors to working-age people has increased, with baby boomers retiring and not enough millennials to replace them. Coupled with the fact that California-born residents now comprise the majority of the state’s population, it is essential for California to prepare young adults to take these jobs — yet the state is below the national average in educational spending despite being above average in income. 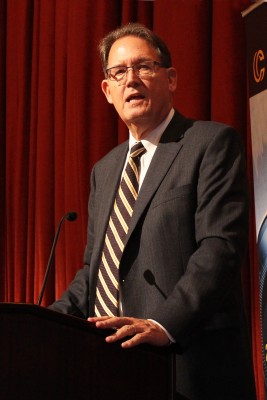 “We’re going to have to rediscover our neglected minority youth,” Myers said. “We can’t afford to let anybody drop out of school anymore, not with a senior ratio like that. It should totally change how we look at our most neglected resources, which are also our greatest growth potential.”

Matt Miller, former host and moderator of the KCRW show Left, Right and Center, moderated a panel featuring Julia Lopez, president and CEO of the College Futures Foundation; Josh Pechthalt of the California Federation of Teachers; Timothy Stearns of the Lyles Center for Innovation and Entrepreneurship; Peter Taylor, president of the ECMC Foundation and formerly the executive vice president and CFO of the University of California system; Van Ton-Quinlivan, vice chancellor of California’s Community Colleges; and Marshall Tuck of the New Teacher Center.

Among the topics covered in the discussion were the achievement gap, teacher recruitment and retention and improving college readiness and completion. Emerging best practices were identified, which included regional alignment across institutions and sectors (including businesses), portable curricula as support for student transfers, development of the teacher pipeline and targeted entry into the workforce.

“We’ve got a big challenge, and I thought this conversation was a great start,” Villaraigosa said in his closing remarks. “I don’t think there’s a more important issue facing this state.”

Inspired by realities exposed during the pandemic, Dean Pedro Noguera announces a series of projects designed to create transformative educational opportunities for kids in L.A. and across the country.

Harper, executive director of the USC Race and Equity Center, will join the National Board for Education Sciences, an independent, nonpartisan branch of the U.S. Department of Education that supports research for education practice and policy.

What do Americans think about controversial topics in schools?

Americans widely support teaching K-12 students about slavery and racial inequality, but most don’t want books with LGBTQ themes made available in schools, according to a report from USC researchers.

Does bias exist in online learning?

Study explores whether race and gender of students in virtual spaces impact teacher grading and their recommendations for educational programs.

Can California close its education gaps?