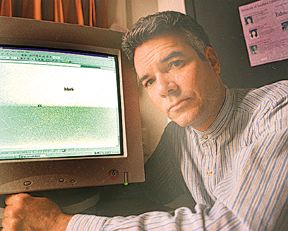 Researcher Jose Abreu: “The hardest thing in the world is to make people aware of their biases.”

THERAPISTS PRIMED with briefly flashed words evoking African American stereotypes rate patients as more hostile than therapists flashed equally brief messages with no racial overtones, finds a study in the June issue of the Journal of Consulting and Clinical Psychology.

“This is the first study to clearly show in an experimental setting that racial stereotypes have an effect on how therapists process information about their patients,” said Jose Abreu, a USC researcher. “One of the essential ingredients of a therapeutic relationship is for the patient to be perceived by the therapist realistically. If there’s ‘noise,’ then the patient isn’t getting the benefit of the treatment.”

Abreu, an authority in cross-cultural therapy and an assistant professor of counseling psychology in USC’s Rossier School of Education, used a procedure that subtly induces subjects to think in terms of racial stereotypes without realizing that they are doing so. He flashed a series of words at the rate of about one-tenth of a second each on computer screens in front of 60 Southern California therapists or therapists in training.

TO CIRCUMVENT social pressures against revealing racial bias, Abreu concealed the study’s real purpose by saying he was trying to assess “individual visual-spatial differences” among the subjects.

Half of the participants were shown words with no racial connotation at all (water, then, would, about, things, completely, people, difference, television, experience, something and thought).

But most of the words shown the other half of the participants played into stereotypes about African Americans (Negroes, Blacks, lazy, blues, rhythm, Africa, ghetto, welfare, basketball, unemployed and plantation).

The subjects then read a brief description and an excerpt from a therapy session with Mr. X, “a man referred for psychological treatment.” The patient’s race was specifically not identified, but therapists exposed to the racial stereotypes unconsciously assumed the patient to be African American while the control group did not do so.

Abreu asked the therapists to rate such general impressions of Mr. X as how hostile or kind he seemed on an 11-point scale ranging from 0 (not at all) to 10 (extremely).

Abreu then asked the therapists to rate on the same 11-point scale how likely the fictitious patient was to suffer from one of eight mental illnesses or conditions, including antisocial personality, substance abuse, anxiety and depression.

Finally, Abreu informed his subjects that Mr. X was black, and he asked them once again to give their general and diagnostic impressions.

WHEN INITIALLY ASKED to give their general impressions, members of the group that had been primed with the stereotype words to assume the patient was African American were much more likely than the control group to view him as hostile. In fact, 70 percent of these subjects did so compared with 40 percent of the therapists who were primed with the neutral words.

“This shows that racial stereotypes do indeed negatively affect how therapists see their patients,” Abreu said.

If such distortions then lead to incorrect or exaggerated diagnoses, Abreu was not able to detect as much – at least not initially. Subjects who originally assumed the fictitious patient to be African American were no more likely than the control group to give higher ratings on specific problem areas. However, Abreu said that more research is needed to rule out the possibility that diagnoses might be as vulnerable to racial bias as general impressions.

“A lack of clinical training in the present sample, which included many therapists in training, may explain why priming did not produce an effect on the diagnostic feature of the test,” Abreu said.

“White guilt appears to motivate therapists to adjust their impressions when they know the patient’s race,” Abreu said. “This may be why past research has failed to uncover racial bias in an experimental setting. As long as therapists suspect the research has to do with racism, they tend to overcompensate, which is a problem in its own right.

The extent to which racism affects the perceptions of therapists has been hotly debated. Studies of records at some hospitals have shown African Amer-icans consistently diagnosed with more severe mental illness than European Americans. But other research has not born out excessive rates of pathology among African Americans, suggesting that the hospital research may reflect racial bias in those institutions.

The USC study illustrates the need for racial sensitivity training for therapists and therapists in training, Abreu said.

“The hardest thing in the world is to make people aware of their biases,” Abreu said. “Everyone is under the impression that they do not harbor biases, but they clearly do. If you can show people that they’re biased, then you can get them to start to change.”