At many large universities, a student might go months or longer without seeing the institution’s president.

But a lucky group of Trojans will get to meet with USC President C. L. Max Nikias on a regular basis during the spring semester: He’ll be one of their teachers.

Nikias will return to the classroom to teach “The Culture of the Athenian Democracy” along with Thomas Habinek, professor of classics at the USC Dornsife College of Letters, Arts and Sciences.

It’s a topic Nikias is uniquely qualified to teach. Born in Cyprus, he received a diploma from the National Technical University of Athens – the oldest and most prestigious higher education institution in Greece – before earning advanced degrees from the State University of New York at Buffalo. Each year during Welcome Week for incoming USC freshmen, he teaches a micro-seminar on Greco-Roman history and drama. He holds a faculty appointment in the classics, as well as one in electrical engineering. 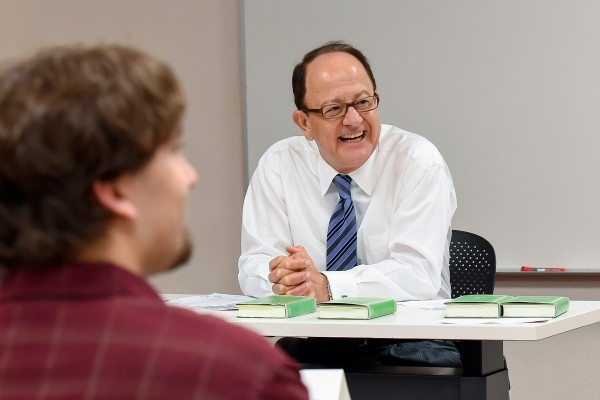 “Throughout my life, the classics have been a deep, personal passion,” Nikias said. “The ancient Greeks pioneered many of the ideals that remain at the very heart of Western civilization, including democracy and personal freedom.

“Side-by-side with my esteemed colleague, Professor Thomas Habinek, and together with the entire class, we will delve into the timeless wisdom of this ancient civilization, whose world still echoes in the many facets of our modern society.”

The spring course will look at the cradle of Western civilization, and with good reason: The Athenians invented democracy and theater, architecture and fine art. They devised trial by jury. They protected dissent.

“One of the best ways to prepare for the future is to take seriously the lessons and warnings provided by the past,” said Habinek, a veteran instructor with more than 30 years’ experience teaching classes on ancient languages, literature and culture.

“I’m excited by the prospect of working closely with President Nikias on this new venture and having the opportunity to introduce another generation of Trojans to the wisdom of the classical world.”

The spring course is open to just 40 freshmen and sophomores who started at USC no earlier than fall 2014. To be considered for the course, students must submit an online application, including two short essays by noon Nov. 6.

Nikias has been with USC since 1991 as a professor, director of national research centers, dean of the USC Viterbi School of Engineering, provost and now as its 11th president. Last month he was honored by the Carnegie Corp. with its Academic Leadership Award.