For years, grape pickers in California’s San Joaquin Valley say they were obliged by their employer to arrive up to 30 minutes before their shift started and work “off the clock.”

Anna Walther ’04 now represents more than 20,000 of these farm workers in a multimillion-dollar class action lawsuit against their employer for the unpaid work they allege they were required to perform over a four-year period.

“The employer got the benefit of all that work and those workers never got paid,” said Walther, a lawyer at Martinez Aguilasocho & Lynch APLC in Bakersfield who represents agricultural workers in class action lawsuits. She also helps provide legal counsel to the United Farm Workers of America, the labor union founded by activist César Chávez in 1962.

Even at minimum wage, Walther points out, that means workers were being shorted $3 or $4 a day.

“That adds up to $20 a week for each worker,” she said. “Over years, employers are accumulating all this extra unpaid work and these very small amounts become huge sums of money that they are basically stealing from some of the lowest paid and hardest working people in this country.”

Walther, who earned bachelor’s degrees in international relations and German at the USC Dornsife College of Letters, Arts and Sciences, said she has been drawn to issues of justice and injustice in vulnerable populations since she was a child.

The attorney said she is interested in helping the invisible, those who are denied their rights and who suffer as a result because society finds it convenient to forget their existence. Prior to defending the rights of farm workers, she helped bring to light human rights abuses at a Guatemalan mental hospital. 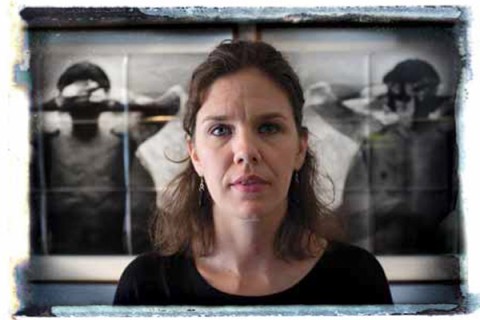 “Starting at USC Dornsife, I was interested in peace studies and human rights. In both contexts, I found there were groups of people that various societies would say ‘Everyone deserves their rights — except them,’” Walther said. “That’s why I was drawn to working with the UFW.”

After pursuing a scholarship she obtained through USC Dornsife’s German department to study political science in Berlin for a year, Walther earned a master’s in peace studies at the University of Notre Dame in Indiana. She earned her law degree from Loyola Law School in Los Angeles.

Armed with a postgraduate public interest fellowship from Loyola, she moved to Guatemala, where she spent almost four years working in the human rights office of the archbishop. There she worked as an international law consultant on human rights cases related to the country’s civil war and to current challenges.

While there, she partnered with the American human rights group Disability Rights International to investigate and document abuses at a psychiatric hospital in Guatemala City.

Walther was shocked by what she found at Federico Mora Hospital.

A place of nightmares

Patients were abused and left in their own filth, there were allegations of sexual abuse and basic medical care was lacking, she said. Patients with violent criminal records were allowed to mingle freely with other mentally ill patients while armed guards, assigned to the hospital to watch those patients with criminal histories, patrolled the grounds and hallways. The stench was overpowering.

It’s a tragic and horrifying place. It would give you nightmares.

“It’s a tragic and horrifying place,” Walther said. “It would give you nightmares.”

After documenting abuses, in 2012 Walther was instrumental in helping to file a complaint with the Inter-American Commission on Human Rights. As a result, the commission issued so-called “precautionary measures” in late 2012, asking the state of Guatemala to take action to prevent a human rights crisis at the hospital. Investigations into those conditions are ongoing.

That investigation attracted international attention to the patients’ plight. Walther helped spur press interest by organizing an official visit to the hospital by the archbishop. Her efforts and those of her colleagues paid off, resulting in articles in The New York Times and a filmed report by the BBC.

Walther credits her time at USC Dornsife for giving her the inspiration and the foundation to succeed in her work. While there, she worked in the Teaching IR Program, which provides high school students with an introduction to international relations.

“It really helped me conceptualize complex issues,” she said.

She cites Steven Lamy, professor of international relations and vice dean for academic programs, as a profound influence.

“He was one of the first people who encouraged me to pursue my academic inclinations and not get discouraged by obstacles that might arise,” she said.

Another influence was international relations professor and prominent peace activist David Andrus, who died in 2004.

I love the intellectual, conceptual side of human rights, but it’s more important to me to help those concepts play out in the lives of real people.

“He taught me that we don’t have to accept that this is the way things are and always will be, and that we can create a bridge from theoretical to the practical. That’s how I ended up in law,” she said. “I love the intellectual, conceptual side of human rights, but it’s more important to me to help those concepts play out in the lives of real people.”

In Guatemala, she said she preferred working to make changes at the hospital over doing legal analysis of war crimes because the hospital patients were still alive and something could be done for them.

“It’s the same for me with the farm workers. There are people who are in very vulnerable positions and giving them access to the law is crucial. Even if not all the lawsuits we file are successful, they still put the employers on notice that they need to comply and pay their workers the way they promised them.”

“That case is ongoing, but the fact that employers have taken note is an improvement that cannot be measured in a damages win on a lawsuit,” she said.

“The sad thing is that, over the years it might take to conduct a lawsuit with all its appeals, some people might move on and not even be around to reap the benefits,” she said. “Sometimes you wish the wheels of justice would move a little faster.”

Alumna serves the community as a Superior Court judge

Dalila Corral Lyons serves as a mentor to students, instilling confidence and helping them to achieve their own dreams.

Women’s rights advocate Penny Abeywardena serves as a liaison between the city and its diplomatic community.

Alumna fights for the rights of the forgotten