Don’t expect to find Noah Malmstadt in an oxygen bar or inside a hyperbaric chamber.

“People think oxygen is good for you, but it can be dangerous,” said Malmstadt, a chemical engineer and associate professor at the USC Viterbi School of Engineering who studies the physical chemistry of cell membrane oxidation.

Oxygen therapy is good for treating burn victims, but not for general health, he said.

“Oxygen is super dangerous; it’s a corrosive gas,” Malmstadt said. “We are supposed to breathe 20 percent oxygen at atmospheric pressure.”

Research that Malmstadt and his team of six USC Viterbi Ph.D. students have conducted over the last three years has given him a unique view into how oxygen can damage cell membranes.

Deep-sea divers, for example, can seize up and die if they experience oxygen toxicity. Malmstadt, in work funded by the Office of Naval Research, is trying to determine when and how that happens on the molecular level. 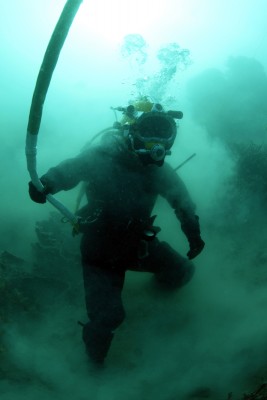 Deep-sea divers can seize up and die if they experience oxygen toxicity.(Photo/U.S.Navy)

His research not only has implications for deep-sea diving, but also could provide a crucial window into how oxidation of cells plays a role in such neurological disorders as Parkinson’s and Alzheimer’s disease, as well as arteriosclerosis, the buildup of plaque in the arteries that feed the heart.

“Oxygen,” Malmstadt said, “is a blessing and a curse.” Just look at what oxygen does to metals, he said: Its corrosive qualities lead to rust.

Malmstadt and his team are among a few researchers nationwide who focus on how oxidation affects super-thin membranes called lipid bilayers, the architectural scaffolding that surround cells, the building blocks of biology.

“That’s why we’re studying it from the point of view of the structure and function of the cell membrane,” he said. “It’s a hard question to answer because oxygen does a lot of things to a cell membrane.”

To study oxygen toxicity on the human body, Malmstadt and his team have used basic chemicals to create simplified copies of real cells. By better understanding the physical chemistry of membrane oxidation, one of the things Malmstadt hopes to determine is how deep-sea divers can best avoid oxygen toxicity.

At a certain depth, nitrogen in conventional compressed air tanks becomes toxic, so a combination of oxygen and noble gases such as helium and xenon must be used. But breathing in that cocktail of air can lead to oxygen toxicity. Why and when that happens is unpredictable. Malmstadt hopes to come up with some answers.

“One of the interesting things we have found is that just a tiny bit of oxidation can cause a radical increase in the permeability of a cell membrane,” Malmstadt said.

A membrane doesn’t need to be completely destroyed by oxygen for problems to occur — just a little bit changes the properties radically, he said.

Scholars familiar with Malmstadt’s work said his use of artificial cells is important because studying real cells is difficult. That’s because of the number of physical, chemical and biological factors simultaneously at work.

“Only with this improved understanding can we begin to rationally develop preventative or therapeutic strategies to counter the effects of oxidation,” Schmidt said.

Malmstadt, who has worked at USC since 2007, has always had an interest in science. The Milwaukee native isn’t sure how he got the science gene; his father was a lawyer and a judge, and his mother worked with children with special needs.

Malmstadt built a telescope in high school and considered a career in astronomy, but changed his mind.

“The field is too competitive,” he said, “so I ended up marrying an astrophysicist instead.”

He and Vandana Desai, who works at Infrared Processing and Analysis Center at Caltech, have been married 14 years and have a 4-year-old son.

When he’s not in his lab or taking care of his son, Malmstadt loves to hike.

“I got disoriented,” he said of reaching the 12,389-foot summit. “I was with my wife, and she had to point me in the right direction.”

Prakash to be honored as American Chemical Society fellow

Malancha Gupta, an expert on polymer coatings and assistant professor at the USC Viterbi School of Engineering, has been selected for the prestigious NSF Career award.

Scientists at USC and Lawrence Berkeley National Lab have discovered a new route by which a proton (a hydrogen atom that lost its electron) can move from one molecule to another – a basic component of countless chemical and biological reactions.

Oxygen is a blessing, right? Well, it can also be a curse