Their Trojan pride is apparent from the moment they walk in the door. She sports cardinal-and-gold pompoms on the handles of her walker; he wears a necktie branded by the USC Viterbi School of Engineering.

Joan and Emrick “Rick” Webb ’50 visited the University Park Campus in May for a special lunch and bench dedication to honor their continued support of the school. That month also marked the couple’s 60th wedding anniversary — part of a love story that began at USC almost 70 years ago.

Seated at lunch, Joan looked around the table, which included her son, daughter and their significant others. Not present was granddaughter Kathryn Webb, who began her Ph.D. program in physical therapy this fall at the Keck School of Medicine of USC.

Turning to her husband, Joan remarked: “Look at what we started!”

Turning back the clock

In 1945, Rick Webb transferred here from the University of Redlands to study architecture. At the time, his mother had a friend who was the Alpha Delta Pi sorority pledge adviser at USC. His mother’s friend passed on the message that Webb should drop by the house to meet some of the ladies, and so he did.

I remember him being cute, shy and quiet.

“I remember him being cute, shy and quiet,” she said.

The couple’s first date was the formal naval ball in June 1946. After a second date — with her parents — the pair dated off and on throughout their time at USC, eventually going their separate ways.

“Well, I had many gentleman suitors,” Joan said with a smile and a wink. And as her husband’s son joked, “Dad had many other sorority girls yet to see.”

Acting on her experience as a marketing major, Joan took a job with a department store, and Webb changed majors to industrial engineering, graduating in 1950.

“I am,” Joan remembered saying all those years ago.

They married two years later on May 28, 1955. Joan credits their long-lasting marriage to being lucky that they could share life’s ups and downs with family and friends, many from their time at USC.

Heading to the bench

After the couple’s springtime lunch on campus, the family walked to the Epstein Family Engineering Plaza and found their dedicated bench, which features a plaque near the bench that reads, “Imaginuity Unlimited-From Dreams-to Reality,” a slogan that Webb invented at USC. Sitting there, the Webbs admired the school and each other. Starry eyed, the loving couple looked as though it were 1946 again. 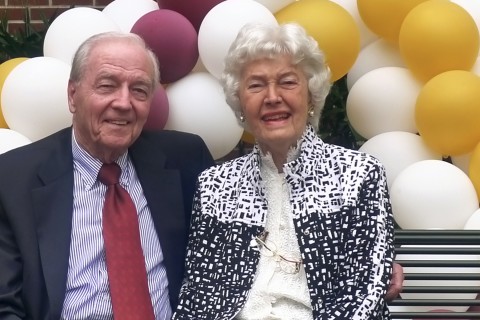 The Webbs sit on the new bench they dedicated at the Epstein Family Engineering Plaza. (Photo/USC Viterbi)

Since graduating, Webb has never ventured too far from USC. He has remained engaged with his alma mater, supporting Trojan football and attending many USC events. He admires USC Viterbi’s growth and is proud to be a part of it all,  pledging $1 million to the school in 2014.

On their walk back to the car at the end of their afternoon on campus, the couple took a moment to reflect on Trojan pride.

“When we were here in the late ’40s, there was not the kind of spirit that there is now,” he said.

Thanks to the Webbs’ continued support, that Trojan spirit is alive and well.

DEN@Viterbi allows captain to pursue a master’s degree from the other side of the world.

Trojan works to increase affordable housing in the Heartland

How great a love story can be at USC