In the few seconds of silence right after the Pledge of Allegiance and just before the singing of the national anthem, the call came in and interrupted the pomp and circumstance.

The radio call reminded the standing-room-only crowd of the real reason to celebrate the opening of Fire Station No. 15 on Oct. 10 — a state-of-the-art facility to protect the residents of University Park and the surrounding neighborhoods.

“The strength of any city arises from the passion, hopes and dreams of the people who call it home,” USC President C. L. Max Nikias said. “Those passions, hopes and dreams can only thrive with peace of mind, with a feeling of safety and security, and with the protection of life and property.

“The Los Angeles Fire Department has protected us since 1886, and safeguarded this particular neighborhood since 1904, more than 100 years, so today we dedicate the third incarnation of this Fire Station No. 15,” Nikias said, “and USC is proud to have a role in building this station, and preserving its history.”

An American flag hoisted in the archway of two raised fire truck ladders presided over the grand opening at 3000 S. Hoover Blvd.

‘Good for the community’

The importance of a new fire station wasn’t lost on Sylvia Vargas, who brought her children, Nicole, 10, and Diego, 7, to meet the firefighters. The resident of the neighborhood for 32 years is also a volunteer for Kid Watch, a USC program that creates safe routes to school for children.

“It’s good for the community — keeping our neighborhood and our kids more safe and secure,” Vargas said.

LAFD Fire Chief Ralph Terrazas said the station responded to 5,000 emergency calls in 2014 and to 3,600 calls so far this year. 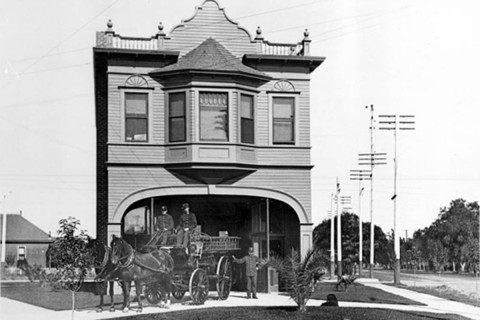 Fire Station No. 15 is “not only a fire station, it truly is a spoke in the hub of this university community and the surrounding neighborhood,” Terrazas said. “Our firefighters know this neighborhood and campus intimately. As USC grows, we are proud to have grown with it.”

The 17,000-square-foot Italian Romanesque will not only protect such iconic structures as the Los Angeles Memorial Coliseum and the Shrine Auditorium but also USC Village, a $700 million retail and residential development due to open in 2017.

USC funded the building of the new fire station and the preservation of the historic façade of the old firehouse that was built 65 years ago. The front of the old station was saved and moved to the Robert Zemeckis Center for Digital Arts Oct. 5, where it will be repurposed into a production studio.

“We know how important our first responders are,” Los Angeles Councilman Curren Price said. “We’re proud to have this facility in our district, in a place that provides services not only to the university community but to the community at large.”

Station on the move: Former firehouse heads to new location for a new life

In the middle of the night, the 1950s-era structure was moved to a new site, where it will become a production studio.

Fire Station No. 15 is ready to roll

With help from a big rig, the retired structure will move to a new USC site a few blocks away. But that’s going to take a while.

Houses hit the road: Victorians preserved by moving a few blocks away

USC President Nikias thanks city officials, acknowledging firefighters and first responders who have serviced the West Adams district for more than a century.