Drones are taking off.

Amazon has begun testing drones in hopes of one day using them to deliver packages to customers wherever they want. In South Africa, park rangers now employ unmanned aircraft systems to catch poachers. The National Oceanic and Atmospheric Administration has used them to monitor migrating gray whales.

That’s not all. Drones are increasingly being used in search and rescue missions. Farmers use them to spray for pests and diseases at a fraction of the cost of helicopters. Hollywood has begun employing them for the perfect aerial shot. Sam’s Club hopes to cash in on their growing popularity by stocking its shelves with them for Christmas.

“Business leaders, innovators and entrepreneurs are coming up with new uses for unmanned aircraft systems every day,” said Brian Wynne, president and CEO of the Association for Unmanned Vehicle Systems International. He added that the industry could create more than 100,000 American jobs and generate $82 billion in economic activity over the next decade.

Among the drone startups ready to take off in this hot market are three closely affiliated with the USC Viterbi School of Engineering: NV Drones and AwesomeSauce Labs, both graduates of this year’s USC Viterbi Startup Garage, and American Robotics, a finalist in the 2014 Maseeh Entrepreneurship Prize Competition.

NV Drones is creating a drone operating system that would make it easier and cheaper for developers to build drone apps. Whereas developers currently must customize drone apps, the company’s NVextender would allow such apps to run on almost any drone platform.

To generate awareness, NV Drones has hired an employee focused exclusively on the developer community, touting NVextender’s ease of use and relatively low price, he said. The company hopes to sell 1,000 units by year’s end.

Growing up, USC Viterbi alumnus Brandon Angelo enjoyed flying radio-controlled planes and helicopters with his family. The son of an electrical engineer, he developed a love of robotics at an early age.

In 2014, he turned that childhood passion into a business when he co-founded AwesomeSauce Labs. The company, which quickly matured in the Viterbi Startup Garage business accelerator, builds drones that hold a GoPro camera for the ultimate selfie. To date, the startup has raised $250,000, including money from angel investors and venture capitalists.

At the Startup Garage’s Demo Day earlier this year, CEO Angelo showed a video with spectacular aerial shots of rowers, hikers and other outdoor enthusiasts taken with an AwesomeSauce drone clutching a GoPro camera. The crowd watched with rapt attention.

The world isn’t flat. Why would you want to capture it that way?

“The world isn’t flat,” he said. “Why would you want to capture it that way?”

Reese Mozer would agree. But instead of making drones for selfies, he wants to build them so farmers can take aerial shots of their fields to better identify pests, disease and even thirsty or flooded crops. 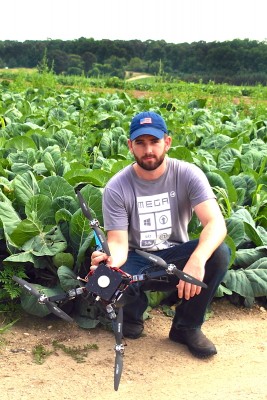 As CEO of American Robotics, Mozer oversees work on a 5-pound, fully autonomous drone that farmers could easily program to fly over and image their crops. Unlike existing agricultural drones, he said, American Robotics’ drone requires no piloting or training and operates independently in the field.

Mozer, now a graduate student at Carnegie Mellon University’s Robotic Systems Development program, said he has used his time at CMU to refine his drone and develop a comprehensive business strategy. He expects to fully launch American Robotics after graduating in December.

“I want to sell this to every farmer in the U.S. and around the world that has enough land to need a drone,” Mozer said.

The Federal Aviation Administration has yet to formulate policies regulating unmanned aircraft systems, although such rules are expected in the near future. For now, states have passed a patchwork of laws. For instance, Michigan has banned unmanned aerial systems from harassing hunters, while Arkansas prohibits their use for voyeurism.

The murky legislative landscape notwithstanding, the Teal Group, an aerospace and defense industry consulting firm, expects the worldwide unmanned aerial vehicle market to nearly double to $11.5 billion by 2024.

Wynne of the Association for Unmanned Vehicle Systems International shares this positive outlook: “As the technologies evolve and government regulations mature, we see no limit to the potential uses of [drones].”

The $700 million project, scheduled to open in 2017, will forever change how Trojans live and learn.

Residential-retail center on north side of Jefferson Boulevard grows skyward.

The sky is the limit for drones, which head upward from Hollywood to South Africa