Throughout a life devoted to flying, writing and creating, John Walter ’49 has traveled a truly historic path.

A gentle, soft-spoken man, the 94-year-old USC alumnus soared — literally — during wartime and beyond, successfully transitioning from World War II duty into a fruitful engineering career at one corporation until his retirement in 1983.

Now living near Columbus, Ind., where he leads a quiet life as a widower, Walter is helped along by neighbors and stays in close touch with his son, Gary, who lives in Michigan and also received his engineering degree from USC in 1973. He still — enthusiastically and in great detail — reflects upon missions flown and his overall experience on the front lines of the European air war.

“Being in the military was an evolving experience bordering on amazement that a group of strangers in short order could become a cohesive unit, and that a first-class training regimen had been developed in such a short time,” he said.

Born in Washington, Ind., in 1921, Walter eventually moved westward, landing in Long Beach in 1940. In 1943, he was called up to the U.S. Army Air Force for active duty. After being discharged in 1945, he enrolled in USC’s School of Engineering a few years later, graduating four years later. 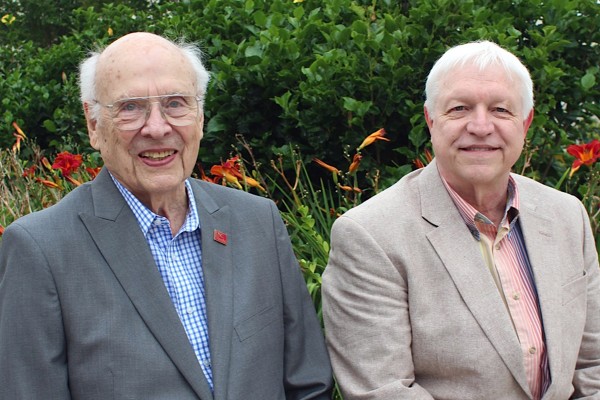 His service years are the backdrop of his extremely detailed autobiography, My War: The True Experiences of a U.S. Army Air Force Pilot in World War II. Walter served as a B-17 Flying Fortress pilot with the 95th Bomb Group of the 8th Air Force (also known as the Mighty Eighth). His rise through the ranks was impressive: After starting out as a cadet, he became a second lieutenant. Then came B-17 training before he was assigned a nine-man crew, with which he flew 35 missions over Europe.

My War, passionate and chock-full of meticulous recollections, details both the excitement and the devastation of combat life.

“Suddenly there was a very close burst. Just ahead of us, a little to the right. Pieces of shrapnel came through the windows in the top of the cockpit. One of them hit (Tom) on the left side just above the flak suit and above his collarbone. He straightened up briefly then slumped over.”

After the war ended, Walter returned to Southern California and attended USC, which has a strong historical connection to World War II because of its role at one point as a training facility for Army officers.

Olympian Louis Zamperini ’40 may be the most famous war hero alum, but there are other, lesser-known USC alumni veterans who also traveled astounding paths as members of the Greatest Generation. Ben Salomon was an Army dentist during World War II who sacrificed his own life to protect many wounded soldiers during the Battle of Saipan. He posthumously received the Congressional Medal of Honor in 2002.

Walter, who began his career right after earning his USC engineering degree, experienced a few minor bumps along the way.

The war was over. I tried to stay in Los Angeles but soon realized engineers were getting the cold shoulder.

“The war was over,” he said. “I tried to stay in Los Angeles but soon realized engineers were getting the cold shoulder. I cast my net nationwide and decided to drop in for an interview close to my hometown.”

Walter was first hired as a senior draftsman and eventually took on leadership and executive roles. He stayed for 34 years. During his distinguished Cummins career, Walter wrote several technical papers that were published in the United States and in England. He also served for several years as chairman of the Cummins Technical Publication Policy Committee and traveled the world from Tasmania to Romania.

Looking back on his professional life, Walter gives poignant and powerful advice for those who might consider enrolling at the USC Viterbi School of Engineering.

“As one undertakes a career in engineering, no matter the particular discipline, you must accept that you are embracing a dynamic field,” he said. “No matter the route you take, the ability to analyze problems/situations is a very useful tool for a vast number of disciplines.”

Aquatic robotics attracts the attention of a budding engineer

Yannis C. Yortsos, dean of the USC Viterbi School of Engineering, says the pledge represents a leadership push to reinvigorate their efforts at diversifying the profession.

War and remembrance: USC alum recalls his experiences on the front lines