This series of images shows warm-season features that might be evidence of salty liquid water now active on Mars. (GIF/NASA.gov)

The red planet made a splash in the media last week, thanks to the release of Ridley Scott’s film The Martian and NASA’s announcement of new evidence for the existence of water flowing on the surface of Mars.

While humans — Matt Damon or otherwise — are still many years from reaching Mars in person, their robotic proxies have proven fit for the journey.

Employing high-resolution imaging technology on the Mars Reconnaissance Orbiter, NASA scientists recently were able to analyze light waves returned from seasonal dark lines on Martian cliffs. The results offered strong evidence for the ebb and flow of water. But does that mean there’s life?

Kenneth Nealson, an astrobiologist who worked for NASA’s Jet Propulsion Laboratory at the California Institute of Technology before coming to USC in 2001, always approaches new research about potential life on Mars with caution.

“My first reaction to a new study, if it has to do with water on Mars, is to be a little bit cynical,” said Nealson, holder of the Wrigley Chair in Environmental Studies and professor of earth sciences and biological sciences at the USC Dornsife College of Letters, Arts and Sciences. “We’ve discovered water so many times on Mars that when someone else says they’ve discovered water — my impulse is to get a copy of the paper and see if there’s anything new.”

Next he looks at the research team for any biologists who can determine if the environment they’ve studied could possibly support the kind of life found on Earth.

“This research didn’t answer that question,” Nealson said. “But what it did do was make a pretty good case that this water-flowing phenomenon is happening now — so we can say not just that there has been liquid water on Mars, but that it’s there now.”

Getting a better picture 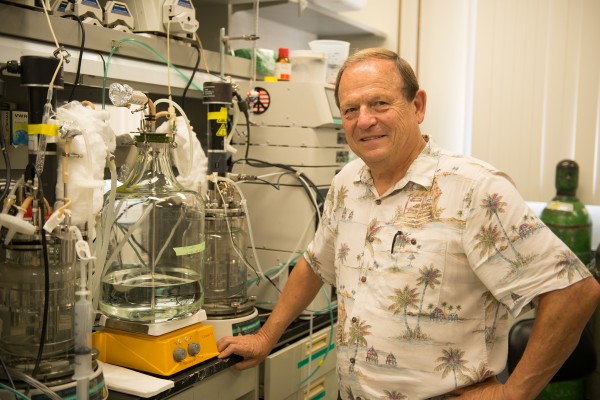 While skeptical about the existence of life on Mars, USC Dornsife Professor Kenneth Nealson believes its discovery would be among the greatest breakthroughs in science. (Photo/Peter Zhaoyu Zho)

Nealson has a particularly strong interest in Mars-related research. His student Rohit Bhartia ’11, a JPL scientist who earned a Ph.D. in geological science and geobiology from USC Dornsife, will have the opportunity to test his doctoral thesis project. It’s one of seven instruments selected by NASA to ride aboard the Mars 2020 Rover — the government’s next mission to land on Mars and collect vast amounts of geological data.

“The instrument is a combined microscope and Raman spectrometer that uses very low-wavelength (deep UV) light so that minerals sampled won’t fluoresce,” Nealson said. “The problem with past instruments was that if you used a longer wavelength UV light, the bright mineral fluorescence impeded our ability to see any potential bacteria on the mineral.”

While recent discoveries will not affect the work Nealson and Bhartia are doing to devise a version of this instrument that fits NASA’s specifications for size and weight, they may influence where the rover eventually lands.

For Nealson, besides the logistical concerns with landing a multimillion-dollar rover on the edge of a steep cliff, the recent discovery still leaves one major concern.

“I can’t find anything wrong with this paper except the jump from ‘we found water’ to ‘there must be life,’” he said.

So why would someone with so many justifiable doubts still devote so much time and effort to finding bacteria on Mars?

“I think finding microbes on another planet would be one of the most sensational discoveries imaginable because now the question would be, ‘Is this like life on Earth — that is: Is it made of DNA and proteins — or might it be a second way to invent life?’” Nealson said.

“It would completely redefine the issue of, ‘what is life?’ And despite my skepticism, that is what we, as scientists, live for.”

In 1976, the National Aeronautical Space Agency launched the Viking program, sending space probes to Mars to determine whether there was life on the “Red Planet.” Thirty-six years later, the debate about life on Mars is not over, but research conducted in part at USC offers more proof that life may exist on this neighboring world.

A team of researchers has been selected to join the NASA Astrobiology Institute, an organization established to develop the field of astrobiology,

A skeptical scientist studies the latest findings on Mars