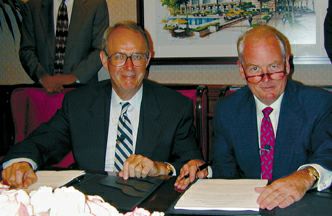 USC President Steven Sample, left, and Robert Day, Chairman of the W.M. Keck Foundation, sign the document conferring to the School of Medicine the largest gift of its kind ever. A large portion of the gift, formalized on Wednesday afternoon, will be invested in neurogenetics, with a major focus on degenerative diseases of the brain.

The W.M. Keck Foundation of Los Angeles has given the University of Southern California the largest gift ever made to a medical school: $110 million.

USC, which has committed to raising an additional $330 million in matching funds, will name its medical school the Keck School of Medicine of the University of Southern California to recognize the generosity of the foundation.

A large portion of the gift will be invested in neurogenetics, with a major focus on degenerative diseases of the brain.

USC President Steven B. Sample, observing that neurological and psychiatric illnesses currently afflict more than 50 million Americans and have a $600 billion per year impact on the economy, called the Keck gift “of inestimable importance to USC and the nation.”

“The Keck Foundation has always been ahead of its time,” Sample said. “The foundation’s investments in astronomy, for example, to create the W.M. Keck Observatory and its two magnificent telescopes have deepened our understanding of the universe while firing our imaginations.

“Now the foundation is anticipating the growing number of elderly who will overwhelm our public services unless we can make serious inroads in the prevention and care of the many neurodegenerative diseases that afflict people of all ages, but particularly the elderly.

“We are pleased and proud that the foundation has recognized USC’s growing strengths in the biomedical sciences and has chosen to invest here,” Sample said.

“This gift recognizes the excellence that USC has built in its medical school,” said Robert A. Day, chairman and president of the W.M. Keck Foundation. “From its beginnings, our foundation has sought projects that demonstrate creativity, innovation and the imaginative use of new technology. Our intention is to help propel USC into the first ranks of medical research not just nationally, but internationally as well.

“This gift is also in keeping with our commitment to the Southern California community-both in its economic impact and its impact on the health of its citizens.

“USC is already a leader in neuro-degenerative disorders emphasizing genetics in conjunction with the neurosciences. By concentrating financial resources in this area, the Keck School will address some of the most devastating health issues of our time.”

Already, scores of USC scientists, clinicians, nurses, technicians and others are at work on the care, treatment and prevention of neurological diseases – at the Keck School of Medicine on USC’s Health Sciences Campus, at the Andrus Gerontology Center and the Alzheimer’s Disease Research Center on USC’s University Park Campus; in the Geriatric Neurobehavior and Alzheimer Center at USC-affiliated Rancho Los Amigos National Rehabilitation Center; and at other sites and clinics throughout Los Angeles County.

The gift and renaming of the School will be formally celebrated at a September 17 event on the Health Sciences Campus.

Sample noted that the direct economic impact on the Southern California region and the East Los Angeles area would be substantial.

Sample said that this commitment from the Keck Foundation means that USC and its partners will be investing close to $1.5 billion dollars in medical research and health care facilities at and near the East Los Angeles USC Health Sciences Campus over the next few years.

In addition to the $440 million from Keck and other donors to USC, Tenet Healthcare is planning to invest $150 million in USC University Hospital, the County of Los Angeles will be spending $818 million on a replacement of the Los Angeles County+USC Medical Center, and developers will be investing $40 million in building the second phase of the USC Healthcare Consultation Center.

The renaming of the School is accompanied by the creation of a Board of Overseers to provide advice to the USC president and the Keck School dean on policies and operations, and to take the lead in raising the matching funds called for by the agreement with the W.M. Keck Foundation. (See story, page 4)

The W.M. Keck Foundation is one of the nation’s largest philanthropic organizations.

Established in 1954 by the late William Myron Keck, founder of The Superior Oil Co., the foundation focuses its grantmaking primarily on medical research, science and engineering.

Keck School Dean Stephen J. Ryan said that some of the new Keck funds will increase the school’s endowment and strengthen support for currently underfunded programs, particularly to provide educational support such as scholarships for medical students. The primary use of the Keck gift will be to support the school’s Neurogenetic Initiative.

According to Ryan, the diseases that will be addressed by the Initiative include: Alzheimer’s, Parkinson’s and psychiatric diseases such as manic depression, schizophrenia and addiction disorders.

“The initiative will bring together scores of Keck School scientists, physicians and physician-scientists to work on common problems,” Ryan said.

According to Ryan, the Neurogenetic Initiative will focus its efforts on bringing together basic and clinical neuroscientists to concentrate on questions underlying a range of disorders that affect individuals ­ from infants to senior citizens.

“USC has long embraced the concept of interdisciplinary research,” Ryan explained. “The USC/Norris is a leader in ‘translational medicine,’ the process of bringing laboratory research closer and more quickly to the beds of patients; and our Institute of Genetic Medicine includes a wide array of scientific and medical disciplines, from molecular biology to pediatrics.”

The director of the Neurogenetic Initiative is Brian E. Henderson, professor of preventive medicine, former director of the USC/Kenneth Norris Jr. Comprehensive Cancer Center and former president of the Salk Institute for Biological Studies.

“The challenge that currently lies before scientists,” Henderson said, “is to unravel the variables leading to neurological disorders and to obtain data on the malfunction of the expressed genes that cause disease.

Using an interdisciplinary approach including molecular epidemiology, neurobiology and genetics, USC scientists will be able to understand how each variable contributes to disease progression and can help in delineating and identifying diagnostic and potential therapeutic alternatives.

“The Neurogenetic Initiative will draw faculty from both USC campuses and from many of its hospital partners,” Henderson said. “We will be seeking solutions to health issues that have enormous economic implications for the future. The cost to treat neurodegenerative diseases is skyrocketing, and the future cost of facilities and professionals to care for patients severely afflicted by these diseases can’t begin to be estimated.”

Ryan said that to address the problem the school will, “draw on all our resources, on both our campuses, and use our considerable expertise in the management of multidisciplinary research to make a difference in the diagnosis and treatment of neuro-degenerative diseases. The effort will be focused in the new Neurogenetic Institute at the Keck School of Medicine of USC. The Keck gift makes the effort possible.”

USC is now the first university in history to secure three gifts of $100 million or more.

Figures tabulated by the Chronicle of Higher Education show that no other university has received three individual contributions of $100 million or more.

With the receipt of the Keck gift, the USC “Building on Excellence” campaign total now exceeds $1.4 billion. The campaign is scheduled to end December 31, 2000.