Stephen Guy sits in the back row in his USC classes. He doesn’t say much to the other students.

Sometimes he can’t believe he’s here. Sometimes it’s hard to believe he made it to a university at all.

Guy transferred this fall from a community college into the USC Annenberg School for Communication and Journalism. Admission to a prestigious program like USC Annenberg’s had been the communication major’s dream — a lofty one considering he had no formal schooling beyond the third grade.

His story of commitment and perseverance is one that begins far from USC, both in geography and circumstance. Guy is a 28-year-old sophomore. When many of his classmates were learning algebra and American history, he never stayed in one town long enough to be enrolled in school.

A childhood on the road

His mother pulled Guy out of elementary school in Colorado Springs, Colo., after his father died in 1995. Guy was about 8 years old, and he remembers that his mother — whom he describes as having mental health issues — feared the government was watching her and even trying to kill her. Her belief kept them on the move, changing locations nearly every day. They trekked for half a decade through America’s heartland in a silver Chevrolet Corsica. Later, when the car was no more and money was tight, they traveled on Greyhound and slept in cheap motels. Sometimes they stayed with family, but never long enough to establish roots.

I had no friends my age. I just wanted a normal life.

“I really missed the social part of school. I had no friends my age,” he said. “I just wanted a normal life.”

Instead, he spent his days and nights reading Stephen King and Harry Potter books and playing video games. He remembers his mother would sometimes go to local churches to ask for bus vouchers. His aunt and uncle tried to help, but in the end, he and his mother would hit the road again.

Flash forward to 2005. Old enough to work and live on his own, Guy and his mother settled down in Colorado Springs, where his older brother, John Martinez, was a single dad raising four kids. Guy and his mother shared an apartment, but after a while, she resumed her disappearing act.

“Our mother just could not sit still,” Martinez remembers.

Guy got a job in the electronics department at the nearby Wal-Mart and moved into his brother’s place, helping pay the bills and take care of his nieces and nephews.

Slowly building his savings, he moved into his own apartment. “It felt really good. I did that with my own money,” he said. 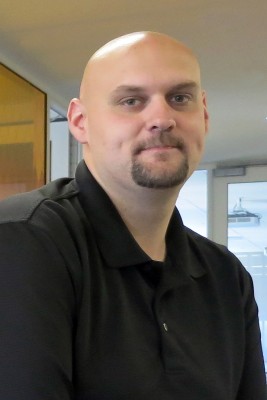 “USC is investing in me,” Guy says.
(USC Photo/Lynn Lipinski)

“I wasn’t making an impact on anyone,” Guy said. “I didn’t have a clear vision then of what I wanted to do, just a sense of ‘not this.’”

His friends from Wal-Mart pushed him to enroll in the local community college.

But one look at his friend’s math textbook from Pikes Peak Community College in Colorado Springs convinced him he was far from ready for class.

A nearby school in a shopping mall offered free GED test preparation. He swallowed his anxiety and went to one of their classes — nervously choosing a seat in the back away from the other students.

“The instructors were calm and kind,” he said. “But for me it was nerve-racking. I remember not knowing where to go. I didn’t have a book. I just came with paper and a pen.”

But he endured, growing more comfortable and even presenting projects in front of other students. Four months later, he took the GED exams. His scores landed him in the 92-to-98 percentile. Along the way, his co-workers and friends went out of their way to help him with tutoring, rides and encouragement. His manager’s wife took him to Pikes Peak to talk to an adviser. He enrolled in an online math class and introduction to English.

There was a choice to make. I decided to work harder.

“There was a choice to make,” he said. “I decided to work harder.”

Guy’s next two papers earned a 95.

“The biggest thing about Stephen is that he’ll always take time to help another person,” said Jessica Johnson, his friend and fellow Pikes Peak alum. A mother of two young children whose husband was in the Army and deployed, Johnson remembers Guy’s calm counsel when she worried that she couldn’t handle her coursework and extracurricular commitments.

“At Pike’s Peak,” she said, “we nicknamed him ‘the Awesome Guy’ because of that.”

I see great things for his future.

“He’s worked so hard and is so conscientious, under very challenging circumstances,” she said. “I see great things for his future.”

He still remembers the date — May 30 — that he opened his mailbox and saw the acceptance package from USC.

“I was super-excited, but I also figured that I couldn’t afford it,” he said. A backup school seemed the more likely option.

A few days later came the financial aid package from USC that changed everything. In addition to a Pell Grant and other funding, Guy learned he had won a University Grant worth $47,000. USC funds and awards university grants based on need, after federal and state aid has been determined.

Johnson, now a junior studying anthropology at the University of Utah, remembers the day clearly.

“He blew my phone up with text messages,” she said. “It was a dream for him. USC was his number one choice.”

Said Guy: “I waited to tell my brother in person. He went nuts when I told him. Crazy proud, in a good way.”

Martinez and his wife threw Guy a going-away barbecue, with a long playlist of songs including “Hotel California” and “California Dreamin’.”

“Getting into USC is such an accomplishment,” Martinez said. “We were very surprised — and very proud. I know Stephen’s found his place there.”

Leaving his network of friends and family in Colorado Springs for Los Angeles was a big transition, but it’s a challenge Guy has embraced.

The only tinge of sadness is that his mother doesn’t know he got into USC. She’s been missing for three years. Because her last known address was in Arkansas and she has a history of long disappearances, the Colorado Springs police wouldn’t open a missing person’s case when Guy tried to file one, he said.

His family and friends are confident he’ll succeed at USC and beyond.

“He’ll not only survive. He will thrive at USC,” Blalock said. “He is a testament to the adversity that some students face and the resilience they respond with.”

As for Guy, he’s nervous but knows from past experience that he can succeed if he tries.

USC Annenberg alumna could be the next Travel Channel Star

Faith is important to Christianne Rojo, who ranks among the top five finalists in a TV contest ending June 26.

Palo Alto native will use her writing and design skills at the tech giant — and may even get face time with co-founder Mark Zuckerberg.

For one transfer student, a difficult road leads to USC