As an adoptee from Taiwan growing up in Texas, Priscilla Hefley struggled to find her identity.

To avoid being seen as an outsider, she embraced the mainstream culture. It wasn’t until college that she began to reconnect with her roots and what it meant to be a Chinese-American.

That experience prompted Hefley to pursue a career path involving international adoptions, bringing her to the master’s program at the USC School of Social Work, where she is conducting research on the effects of childhood trauma.

Specifically, Hefley is reviewing a collection of video testimonies of survivors of the Holocaust and genocides in Armenia, Rwanda and China. (The materials are housed at the USC Shoah Foundation — The Institute for Visual History and Education.) She hopes to identify patterns of trauma across cultures that can be addressed in early life to avoid negative outcomes in adolescence and adulthood.

After filtering the archival material by language, age at the time of trauma and experience as an adoptee or orphan, Hefley has started searching for objective symptoms such as intrusive memories, hyperarousal and numbing.

We can prevent being shuffled through the system because that just imparts more trauma on the child.

“If we can identify some of the outcomes that are likely, certainly not inevitable but possible, we can prevent, for example, a lot of inappropriate placements for adoptees or foster children,” she said. “We can prevent being shuffled through the system because that just imparts more trauma on the child.”

Hefley has always had a fascination with how the human mind can handle traumatic events. As an undergraduate beginning to reconnect with her own experience as an adoptee, she decided that she wanted to find a way to help others process childhood trauma. 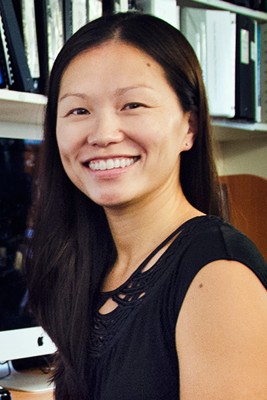 Initially planning to produce documentaries about adoptees to raise awareness, she earned a degree in film and television production from the University of Arizona. She went on to complete a master’s in business administration to complement her film skills, but found she enjoyed the interpersonal side of business more than operations, leading her to pursue an MSW at USC.

Her long-term vision is to develop an international organization focused on helping orphans and adoptees deal with traumatic experiences.

There is something within each person that can allow them to pull through.

“Knowing I wanted to work with families, how can I be best prepared?” she said. “There is something within each person that can allow them to pull through, and I’m fascinated and wanted to know more about that. There was no way to do that without research.”

Hefley approached Hazel Atuel, a research assistant professor, for guidance on developing a research project related to the effects of childhood trauma on the brain. Atuel immediately thought of the USC Shoah Foundation archives, essentially a rich collection of firsthand interview data with high relevance to Hefley’s interests and background.

“My goal was to make this research experience a meaningful one for Priscilla,” Atuel said.

After researching cognitive and affective indicators of trauma, Hefley began narrowing down the archives to individuals who spoke English, were between 5 and 11 years old at the time of the traumatic experience and who had experience as an adoptee or orphan.

Having reviewed only a handful of video testimonies, she has started to identify common patterns across cultures and is considering how that information could inform her future work, such as developing an educational program for parents whose adoptive child begins withdrawing socially or exhibiting other symptoms of trauma.

“She is already beginning to make links between research and practice,” Atuel said. “It’s very exciting to see that what we talk about in the classroom is becoming real to her. It really has implications for her social work practice and long-term goals.”

Abused as a youngster, Crystal Anthony finds purpose by helping others as a social worker.

The feat of standing up on  a board and riding a wave may empower people struggling to overcome PTSD and other challenges.

As head of mental health and crisis response in Los Angeles schools in the late 1990s, Marleen Wong could sense that violence and trauma were having a serious effect on children.

For the last four decades, the USC associate dean has dedicated herself to the mental health of traumatized children.

Adoptee explores childhood trauma in the hope of helping others