How do you turn stem cells into nephrons, the functional unit of the kidney? Albert Kim, a postdoctoral fellow in the laboratory of Andrew McMahon, is exploring that question with support from a Hearst Fellowship, an award recognizing an exceptional junior postdoctoral fellow pursuing stem cell research at USC.

As a Hearst fellow, Kim will launch his early scientific career with a generous startup package, including salary and benefits for a full year. He will enjoy access to world-class facilities and equipment at the Eli and Edythe Broad Center for Regenerative Medicine and Stem Cell Research at USC — including the William Randolph Hearst Foundation Imaging Laboratory, supported by a previous $200,000 gift from the Hearst Foundations. He will also connect with faculty and colleagues across the university through USC Stem Cell, a collaborative and multidisciplinary effort bringing together more than 100 researchers working to translate discoveries into cures.

The fellowship would have come as no surprise to Kim’s grandfather, who predicted early on that his relative would grow up to become the family’s first scientist.

“My grandfather noticed my curiosity about nature and animals, and he was a good judge of character,” said Kim, whose parents both work in non-science-related fields — as a florist, and as a graphic designer and landscape architect.

Kim spent his formative years in Los Angeles’ Koreatown before heading to the University of California, San Diego, where he earned his bachelor’s degree, master’s degree and Ph.D. While he was earning those degrees, he worked in the lab of David Traver and studied the early formation of blood stem cells in zebrafish embryos.

When McMahon, director of the Eli and Edythe Broad Center, gave a guest lecture at UCSD, his clarity of scientific thought made a strong impression on Kim. Earlier this year, Kim became a postdoctoral research associate in McMahon’s laboratory at the Keck School of Medicine of USC, where he is applying his expertise to the challenge of kidney regeneration. 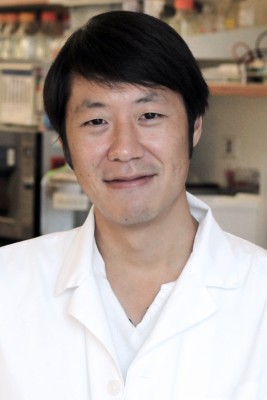 “My long-standing scientific interest has been aimed at understanding how the microenvironment of immature cellular precursors is important for properly instructing specific cell fates,” he said.

Armed with his fellowship, he aims to isolate and generate a large number of kidney progenitor cells with the ultimate goal of repairing damaged adult kidneys.

Although researchers have recently used stem cells to form primitive kidney organoids, mystery shrouds the process and requirements of kidney formation in humans. By comparing kidney cells from human and mouse embryos with kidney cells produced in the lab, Kim will determine the optimal conditions and genetic profile for kidney formation.

To produce an appropriate matrix scaffold upon which to grow these cells, Kim is collaborating with the lab of Megan McCain at the USC Viterbi School of Engineering.

From the multiple interactions I have had with Albert, I get the sense that he really wants to push the field in new directions.

“From the multiple interactions I have had with Albert, I get the sense that he really wants to push the field in new directions and pursue innovative and creative projects, which is refreshing,” McCain said. “He is an excellent candidate for this fellowship, and I look forward to continuing to collaborate with him.”

McMahon, Kim’s mentor, added, “Dr. Kim is just the sort of talented young scientist we seek to encourage and acknowledge as a Hearst fellow. His proposal is ambitious, as it should be for a scientist of his caliber. The potential is enormous, the time opportune and Dr. Kim has the credentials to make his mark in this important new area.”

The teens boost their scientific IQ by conducting research in USC labs.

Postdoctoral researchers will have access to top facilities and resources to obtain vital data.