Once the stuff of science fiction, genetic engineering is now offered on a fee-for-service basis at USC.

USC Stem Cell faculty and staff welcomed their supporters, the Chang and Choi families, and nearly 100 of their friends to celebrate the grand opening of the Chang Stem Cell Engineering Facility, located on the second floor of the Eli and Edythe Broad Center for Regenerative Medicine and Stem Cell Research at USC, on Sept. 19. Established with a generous gift from the Chang family, the facility will serve researchers at USC as well as at other institutions. 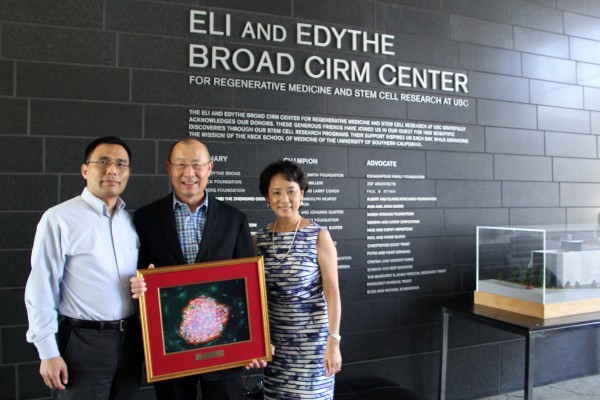 “My hope for this facility is to change people’s lives and make people live longer and better,” said Daniel Chang MS ’95, who gave the gift with his wife Cai Li, son Jorlly, and daughter and USC freshman Carrisa. “USC is our first stop in searching for the American dream. At USC, not only did I learn a lot, but also started to get to know America and met my mentor for life, Dr. Ferdinand A. Kröger, a professor at the USC Viterbi School of Engineering. Because of his influence, I became the founder of a science and technology enterprise.”

The Chang facility genetically modifies embryonic stem cells (ESCs) and induced pluripotent stem cells (iPSCs), which can be derived and propagated by the existing CIRM Stem Cell Core Facility, also located at the Eli and Edythe Broad Center. Genetically modified ESCs and iPSCs, derived from human patients or animals, provide an opportunity to investigate the mechanisms of disease and to develop new treatments.

With these genetic modifications, investigators can expose some of the cells to thousands of potential drugs at the existing Choi Family Therapeutic Screening Facility, which is located across the hall from the Chang facility.

This is a unique pipeline that no other institution has.

“The Eli and Edythe Broad Center for Regenerative Medicine and Stem Cell Research is a one-stop shop where scientists can have iPSCs derived, genetically modified to make tools for studying diseases, and screened for therapeutic drugs,” said Andrew McMahon, director of USC’s stem cell research center. “This is a unique pipeline that no other institution has, and it will provide the technical support to enable scientists at USC and beyond to take their pluripotent stem cell research to the next level — creating sophisticated disease models and ultimately developing translational therapies.”

Qi-Long Ying, director of the Chang facility and associate professor of stem cell biology and regenerative medicine, and cell and neurobiology at the Keck School of Medicine of USC, added: “By combining the power of genome editing and stem cell technology, this new facility provides a versatile and efficient stem cell engineering platform to help investigators from USC and beyond create disease models in a dish and develop new treatments.”

To accomplish these goals, scientists in the Chang facility are using a new gene-editing technique called “CRISPR/Cas9” to make changes to the DNA of living cells.

The technology has its roots in scientists’ examination of how bacteria’s immune system fends off viral invaders. In this process, bacteria use a genetic sequence called a CRISPR to form a highly specific and stable complex with a region of the viral genome, and to pull in a protein called Cas9, which can cut and cripple the virus’ DNA. 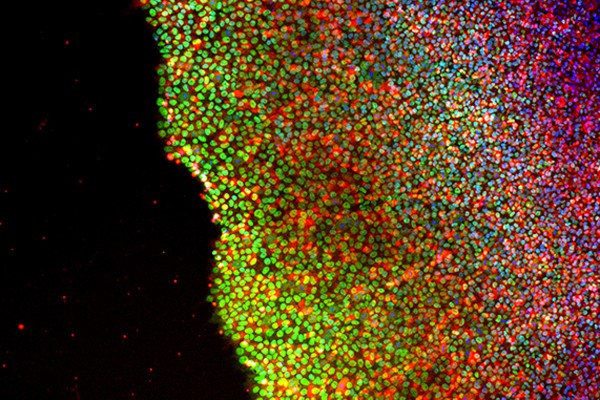 These induced pluripotent stem cells from a patient were made with chemicals. (Photo/courtesy of the Ichida Lab)

In a remarkable example of the power of basic scientific discovery to lead to unexpected and broadly applicable technological advances, scientists at the University of California, Berkeley, reported in 2012 that CRISPR/Cas9 could be co-opted to make designer modifications to the human genome. It is now clear that essentially any cell type can be a target for genomic engineering in any organism.

When scientists cut DNA, broken ends normally repair, generating small deletions in the process and enabling the creation of mutations where essential genetic sequences are removed.

If scientists provide the repairing cell with a copy of the cut genetic sequence, the cell can use this copy as a template for repair. In this way, scientists can introduce subtle mutations — such as changing a single genetic building block, called a base, in the 3 billion bases that make up the human genome. This enables the correction of existing mutations or the introduction of new mutations to create precise models of genetic disease.

All of these events occur naturally within the normal life of a cell, but by breaking the DNA in targeted spots, CRISPR/Cas9 kicks the repair process into high gear — so that up to 10 percent of the cells might have the desired genetic edit. This makes CRISPR/Cas9 one of the most efficient, user-friendly techniques for modifying genes.

“Gene-editing tools such as CRISPR/Cas9 give us a simple way to make precise changes in cells, and to model both human diseases and the genetic approaches that could be used to treat them,” said USC Stem Cell principal investigator Paula Cannon, who is developing next-generation tools to genetically edit blood stem cells as a treatment for HIV, immune deficiencies and blood diseases.

In patients with the most common form of ALS, their DNA contains a specific mutation: hundreds of extraneous repetitions of a gene called C9ORF72.

Ichida has taken patient-derived motor neurons and cut out the extra copies of C9ORF72, thereby halting the disease’s signature degeneration in the laboratory. Currently, he is using this technique in the lab to ensure that the degenerative motor neuron processes that he investigates all result from the extraneous DNA repetitions, so he can search for drugs that effectively treat this specific form of the disease. In the future, he hopes to use this technique in patients to correct their mutations and cure their disease.

“ALS is very complicated. All neurodegenerative diseases are,” Ichida said. “We do know a lot about the genetics, however. So if we could just change the genetics in patients, that might be a way to cure the disease.”

It’s never too early to get teens interested in science, as evidenced by these enthusiastic researchers.