USC Price School of Public Policy Professor Frank Zerunyan recently served as the first international expert on local governance models brought in to consult with public officials and community leaders from the Bao’an District in the city of Shenzhen, China.

Zerunyan, a former two-term mayor and current councilman of the city of Rolling Hills Estates, received the invitation from Haobo Yang, vice chair of the Bao’an District Committee, who previously studied with Zerunyan in an executive education course at USC Price.

“The Bao’an District Social Work Committee, as well as scholars from Tianjin and Tsinghua universities, are studying community governance and innovations on collaboration and engagement of Bao’an communities,” said Zerunyan, who is the director of executive education at the Bedrosian Center on Governance and the Public Enterprise. He also lectures at the United Nations headquarters in New York and at UN Forums around the world as an appointee to a UN experts committee on capacity building in public administration.

The needs of a booming population

With a population of more than 5 million people, the Bao’an District is the largest administrative district of Shenzhen City, a boom town that has grown from a village of 30,000 to a metropolis of 10.6 million in about 30 years.

“It’s only a district of the entire city, and it’s bigger than the city of LA,” Zerunyan said. “It’s colossal.” 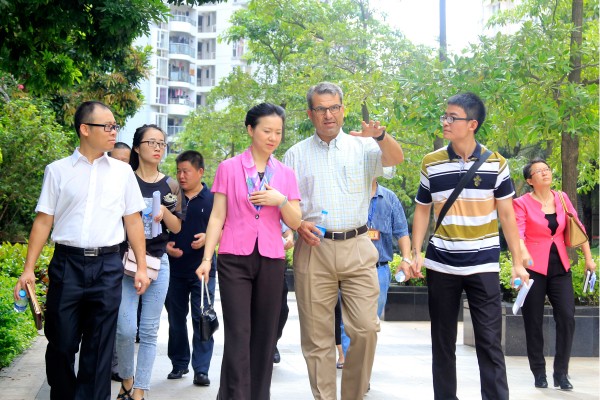 Frank Zerunyan visits a community in the Bao’an District with Vice Chair Haobo Yang and her staff. (Photo/courtesy of Frank Zerunyan)

The Bao’an District consists of 124 communities, the smallest local units of government in China. Communities don’t control land use, but they do provide social services ranging from daycare to recreational opportunities.

Zerunyan delivered two lectures on collaborative governance — one to an audience of 250 leaders of these communities, and the other to an audience of 100 public service academy instructors, professors and scholars.

“Today, based on the advent of technology and the Internet, it is not possible any more to govern through just governments, but through all three sectors: public, private and nonprofit,” Zerunyan said. “That is really the core of what I teach, and that is what I spoke about — collaborative governance and our California experience.”

Zerunyan encouraged the audiences to think about how to create a model of collaborative governance specific to China and its three sectors. The nonprofit sector, in particular, operates very differently in China, which has no laws officially recognizing nonprofit organizations.

You are a several-thousand-year-old culture. You don’t need to emulate anyone.

“You are a several-thousand-year-old culture,” Zerunyan recalled telling the audience. “You don’t need to emulate anyone. You just need to find your own governance model through reasonable reforms that instill in people a sense of ownership, responsibility, volunteerism and true autonomy through fiscal and political decentralization.

“That message drew major applause from the public officials, all the crowd, because that resonated,” he added.

By sharing his expertise in China, Zerunyan is carrying out a larger mission of USC Price: to act globally by helping local and central governments implement reforms, advance country building and establish good governance. Over the past three years, Zerunyan has lectured in a dozen countries.

“Especially when examined through the lens of public administration, the basic needs of people are not that much different across the globe,” Zerunyan said. “I have always believed that we have more fundamental agreements that unite us than what divides us; it’s just a matter of focusing on commonalities rather than discords.”

In addition to a roundtable discussion on China, the retired general and former CIA director delivered lectures in courses ranging from modern leadership to foreign policy.

Students to bike across America to feed hungry children in China