Leading the effort on USC’s behalf is Inderbir Gill, the founding executive director of the USC Institute of Urology and chairman and professor in the Catherine and Joseph Aresty Department of Urology at the Keck School of Medicine of USC.

Gill was in attendance late last year when India’s Prime Minister Shri Narendra Modi inaugurated the hospital, a historic facility that has been revitalized with the addition of a technologically superior, 19-story tower with 345 beds.

This hospital, which is operated by a trust and is not-for-profit, is funded by the Reliance Foundation.

Discussions for this association started a few years ago and eventually led to Keck Medicine of USC’s partnership with the new hospital in India. USC President C. L. Max Nikias see these types of synergistic partnerships as a positive outgrowth of the university’s growing reputation as an innovator in the health and medical fields.

“Dr. Gill and his colleagues in Los Angeles stand at the fore of efforts to devise new and better treatments of urologic disease, and their work improves lives all over the world,” Nikias said. “USC is privileged to support this opportunity to extend Dr. Gill’s outstanding expertise in urology and the field of robotic surgery to benefit patients in India.” 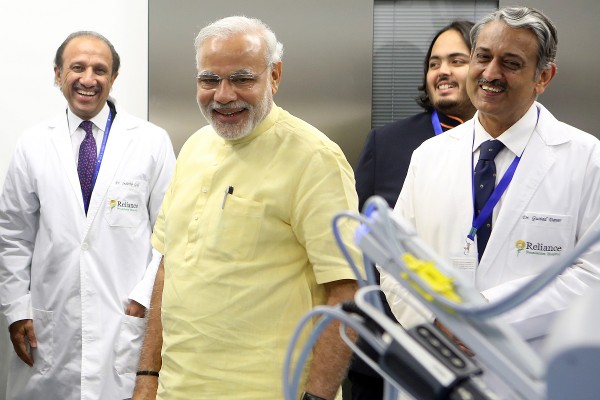 USC’s international reach includes an office in Mumbai. Less than three miles away is the Sir H. N. Reliance Foundation Hospital and Research Center, which was first established in 1918 but has been rebuilt under the guidance of Nita Ambani, chairperson of the Reliance Foundation.

“We have a strong commitment to make this one of the best hospitals in the entire subcontinent by drawing on the talent and expertise of leading health care institutions worldwide,” Ambani said. “As part of this effort, we reached out to Dr. Gill to help us establish this relationship with USC.”

A first of its kind

The relationship could expand over time, but USC’s initial focus is built around Gill’s specialties in urology and robotic surgical procedures.

“This is the first of its kind,” said Thomas Jackiewicz, senior vice president and CEO of Keck Medicine of USC, about the partnership. “With Reliance Foundation hospital’s infrastructure and stature — and USC’s and Dr. Gill’s presence in the field of urologic robotic surgery — we absolutely will create India’s premier robotic surgery and urology program within a year or two.”

Additionally, USC and Reliance Foundation hospital are collaborating in teaching and research activities, including advanced training for Indian urologists and residents.

We see this relationship with USC as a big step forward for the entire hospital.

“We see this relationship with USC as a big step forward for the entire hospital and the Department of Urology that will benefit immensely from the excellent medical training and expertise of an internationally acclaimed medical institution and its renowned doctors,” Ambani said. “It will also enable our patients to be treated directly by Dr. Gill and benefit from his rich experience.”

The opportunity to make a lasting impact on health care in the Asian subcontinent is particularly exciting for Gill.

“If one is able to impact urological practice in India, not just by me personally operating on patients but by teaching a thousand urologists, then that would be an enormous privilege,” he said.

The benefits of the partnership for India’s citizens will be significant, but it’s a two-way relationship, Gill said, that has already improved patient care in the United States.

“In the past, we have gone to India to collaborate and develop novel robotic techniques, and we have brought those techniques to the U.S. and to USC,” Gill said. “To give just one example, USC is the leading center in the country for robotic surgery for bladder cancer. And some of those techniques, we developed in India.”

The partnership also holds promise for clinical trials of new treatments, he said.

When Gill first came to the United States 27 years ago, it was largely to innovate novel technology in this country.

“Then I came to USC and have been here five years, and our team, co-led by doctors such as Monish Aron and Mihir Desai, has truly pushed the boundaries of robotic surgery in urology,” Gill said. “I can confidently state that the USC robotic urology program is the acknowledged world leader today.”

Now he has an opportunity to take his expertise back to India, sharing it in a hospital that has been outfitted with state-of-the art equipment.

“We are recruiting faculty. We are going to be performing robotic surgeries there. Having international conferences. Setting up teaching programs. Teleconferencing grand rounds on Skype,” Gill said. “It is an enormous privilege for USC Urology to help develop Reliance Foundation Hospital Urology.”

Gift helps secure the future of urology education at USC

Felix Yip, clinical professor at the Keck School of Medicine of USC, has fond memories of his internship at USC in 1980.

USC president C. L. Max Nikias, appearing at a meeting of the USC Institute of Urology on Feb. 7, announced an anonymous gift of $13.3 million that will fund the forthcoming USC Urology Robotics Center of Excellence and a program for prostate cancer targeting.