The Safe Communities Institute at the USC Price School of Public Policy hosted a delegation of European representatives seeking to better understand homegrown violent extremism prevention efforts in the United States and what makes youth susceptible to radical messaging.

Erroll Southers, director of homegrown violent extremism studies at SCI, presented his research to four members of the Organization for Security and Cooperation in Europe (OSCE), a regional intergovernmental organization based in Vienna consisting of 57 countries from Europe, Central Asia and North America.

The visit, which took place Aug. 24 at Lewis Hall, was part of a two-week U.S. trip by OSCE. It was set up by the International Visitor Leadership Program in the U.S. State Department’s Bureau of Cultural Affairs, which earlier this year brought Iraqi officials and community leaders to USC for a similar discussion of counter-terrorism strategies.

These collaboration efforts are priceless.

“Violent extremism is clearly a global issue — even homegrown violent extremism — so anytime we can have these conversations with our international partners on what it is and how to respond to it holistically, we benefit from it as much as they do,” Southers said. “These collaboration efforts are priceless, and we’re very lucky that whenever these organizations and delegations come through the U.S., the State Department makes sure they come by and see us.” 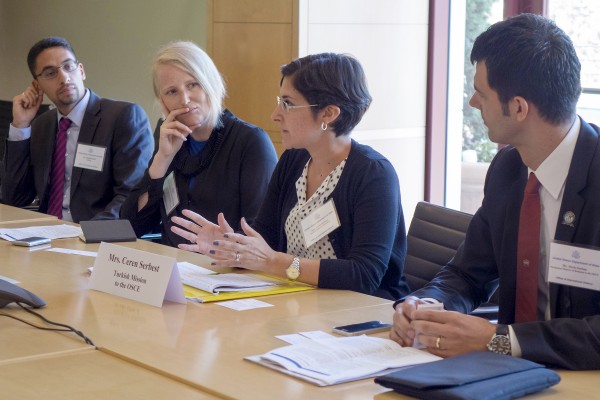 “This is a topic on which our school and USC has put a high priority,” Knott told the representatives. “We have a center devoted to terrorism in CREATE, and we have our new Safe Communities Institute, for which the issue of terrorism and especially violent extremism is critical.”

Southers explained that SCI has opted not to use the phrase “countering violent extremism” because it has become synonymous with Muslim extremism only. However, violent extremism falls under the categories of race, religion and issue-oriented, and it’s the issue-oriented groups that are causing the greatest day-to-day threat according to law enforcement. SCI is working on developing a database that will identify violent confrontations between public safety officials and extremists across the country, including the ones who don’t get as much attention.

We’re seeing individuals who seem to be checking boxes for whatever works for them.

“To people who think we can profile someone, I always say we’re not seeing this homogenous ideology anymore,” Southers said. “We’re seeing individuals who seem to be checking boxes for whatever works for them, and as many boxes as they can have, they’ll use.”

Building strong community resistance to violent extremism is the key to preventing threats, which is why the newly revamped SCI has taken a whole-of-community approach. As Quiambao said, “We cannot arrest our way to a safe community.”

“With alienated individuals who have an ideology they believe is legitimized, we think the only thing we can influence is the community or family they live in, so that’s why we chose to do it this way,” Southers said. “We used to be a law enforcement-centric institution. Now we’re a holistic community institute where law enforcement has an equal seat at the table with everyone else who can make the community whole. We know that public safety today works only if the community in fact takes responsibility.”

“It was very useful to have insights from academia on the issues of violent extremism in the United States,” Knani said. “I look forward to staying in touch with colleagues here in seeing how we can network more research institutes throughout the world who are studying this phenomenon because I think we’re still operating too much in silos. It’s very important to have this sort of global conversation.”