As Californians get their first look at new test results since 2013, a new poll shows state voters have mixed views on the Common Core State Standards, and their views shift with the way questions about the standards are posed.

Levels of support for the Common Core are generally higher — and levels of opposition are lower — in California than in the rest of the nation. The PACE/USC Rossier School of Education Poll shows a strong majority still know little or nothing about the new standards, however, and many voters are misinformed about the details. More than one in four California voters (26 percent) had not heard of the Common Core State Standards, the poll showed.

The PACE/USC Rossier Poll randomly asked voters several differently worded questions about Common Core support, reflecting the different questions included in other national and California polls. The results of the poll showed the wording of the question can dramatically affect responses.

When the poll asked voters whether they support or oppose “having the teachers in your community use the Common Core State Standards to guide what they teach,” as the recent PDK/Gallup Poll posed the question, the percentage who support Common Core fell to 24 percent. The percentage that opposed the new standards also fell, to 27 percent.

As you may know, over the past few years states have been deciding whether or not to implement the Common Core State Standards, which are national standards for reading, writing and math. In the states that have these standards, they will be used to hold public schools accountable for their performance. To what extent do you support or oppose the use of the Common Core Standards in California?

Even after four years of implementation …, most Californians simply don’t know or don’t care much about Common Core.

“Even after four years of implementation and a great deal of political controversy, most Californians simply don’t know or don’t care much about Common Core,” said Morgan Polikoff, assistant professor of education at USC Rossier and an expert on Common Core standards. “Their views depend to a surprising extent on the questions they are asked about the new standards.”

Knowledge of the standards

The PACE/USC Rossier Poll also found that nearly six in 10 voters (59 percent) said they knew “a little” or “nothing” about the Common Core State Standards, with 41 percent of voters who said they knew “some” or “a lot” about them.

There remains a great deal of misinformation about the standards.

“There remains a great deal of misinformation about the standards, and this is almost certainly driving some portion of the opposition here in California,” Polikoff said.

“California’s policy leaders have been very deliberate in their implementation of the Common Core, which has short-circuited much of the political controversy that has emerged in other states,” said David Plank, executive director of PACE. “California’s teachers unions and other education organizations are united in their support for the state’s new standards, and the opponents of Common Core have not found a way to make it a significant statewide issue.”

When asked to guess how long they thought California students spend taking state tests in a school year, voters on average said more than 23 hours, the poll showed. 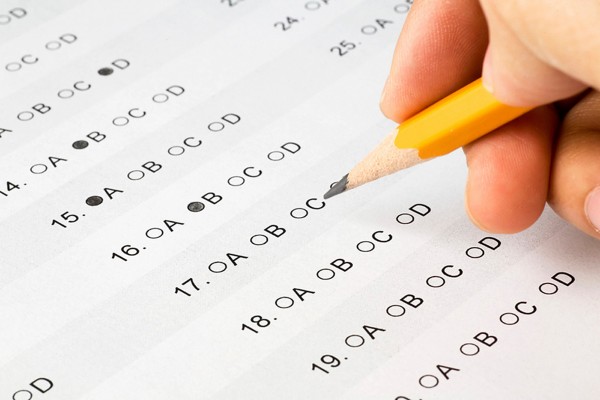 “State policymakers should be encouraged to see that the majority of voters support annual testing and multiple uses of those data,” said USC Associate Professor and PACE Co-Director Julie Marsh. “The big question is whether that support will continue after the new Smarter Balanced test results are released.”

Results from the PACE/USC Rossier Poll released Aug. 27 showed voters are increasingly optimistic about California public schools, and a strong majority would back the reauthorization of Proposition 30 to provide additional funding to public campuses.

The poll is the fifth in a series from Policy Analysis for California Education (PACE) and the USC Rossier School of Education.

The results indicate a rising sense of optimism among a majority of voters, according to a new USC Rossier poll.

Total immersion: How VR is transforming everything from education to medicine

Before Chris Merkle began VR exposure therapy using a system designed at USC, the Iraq veteran was unable to speak about his experiences on the battlefield.