A set of four new studies from researchers at USC and Southwest University in China suggest that children left behind can still succeed.

The scientists focused on a population with profound social and economic challenges: rural Chinese children “left behind” by parents, usually in the care of grandparents, while they seek jobs far from home.

These parents do not take their children with them because Chinese law requires that children attend school in the area where they were born, said Daphna Oyserman, Dean’s Professor of Psychology and co-director of the USC Dornsife Center for Mind and Society.

As a result, an estimated 40 percent of all Chinese children in rural areas — as many as 60 million — are left behind, according to the All-China Women’s Federation.

Their parents, like parents everywhere, sacrifice the present for hopes for the future.

“Their parents, like parents everywhere, sacrifice the present for hopes for the future. I started the studies wondering if calling a child ‘left behind’ would have negative consequences with the implication that ‘no one loves me,’ ” Oyserman said. “Or are the parents able to instill in their children this narrative?: ‘We are doing this so our family can move forward.’”

“That is what we found: Like their peers, ‘left-behind children’ who focus on their possible future selves and especially on strategies to attain these possible future selves, fulfill their parents’ ‘moving forward’ narrative,” Oyserman said. “Their academic performance improves, they have fewer problems at school and feel better.”

The narrative could apply to children anywhere, Oyserman noted. U.S. children, for example, may face homelessness, separation from a parent through divorce or endure the instability of foster care placement. 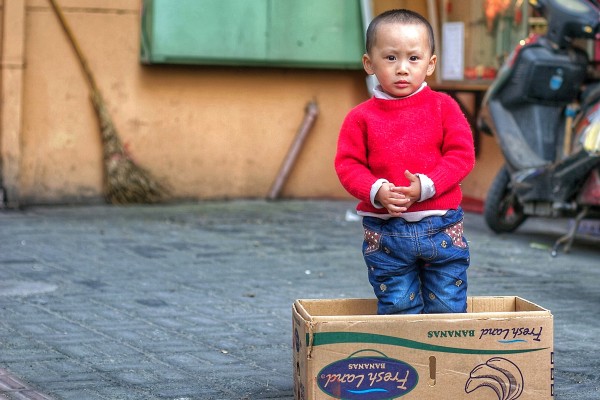 “In our studies, even though children who are left by their parents are clearly emotionally stressed, they are not doing worse academically than the others in their classes,” Oyserman said. “They seem to have gotten this message: ‘Life is hard. Pull yourself up.’”

Oyserman and her colleagues conducted four studies with four separate groups of children, all around 14 years old, in the Chongqing region of China, to gauge their feelings about the future and fatalism, and to determine what helps children rise above difficult circumstances.

In the first study, 144 students were divided into two groups to ask about their optimism and left-behind status. One group of students was first asked whether it was left behind and then asked about its optimism for the future. Children in the other group were asked the same questions but in reverse order.

We found that by just thinking about the fact that you could be ‘left behind’ had a negative effect on the kids’ optimism for the future.

“We found that by just thinking about the fact that you could be ‘left behind’ had a negative effect on the kids’ optimism for the future, and it increased their fatalism,” said Oyserman, who conducted the study with Southwest University-China professor Chongzeng Bi.

In the second study, 124 students were again divided into two groups. This time, children were asked about their fatalism, about their images of what might be possible for them in the future and their strategies to get there.

“Again, just thinking about the fact that you could be left behind had a negative impact, in this case, increasing fatalism about the future. These feelings that their fate and future were not in their control also dampened the number of images they had of their future selves, as well as the number of strategies they had to become their future selves,” Oyserman said.

In the next two studies, the researchers asked about the effect of possible selves and strategies on outcomes such as school exams and in behavior. In the third study, 176 ninth-graders described their future selves and strategies to attain them, and answered questions about their left-behind status. The researchers obtained teachers’ reports of these students’ in-school behaviors over a 16-week period and their scores on the final examination, which occurred six weeks after they completed the questionnaire.

Students with more images of their future possibilities scored higher on the exam. For left-behind children, though, having possible selves was a double-edged sword, Oyserman said. Those with more future-self images were more likely to have behavior problems in school. But if they had strategies for attainment, they were less likely to have behavior problems, she said.

In the fourth study, 145 ninth-graders answered the same questions about future selves and strategies as the third study. Researchers also obtained their examination scores twice, once eight weeks after students reported on their future selves and strategies, and again a year later. Also at that later point, students were asked to report on their depressive symptoms using a standardized instrument.

The study revealed that those with more strategies to attain their possible selves scored better on their exams a year later, controlling for their prior test score, and showed that they were less likely to be depressed, Oyserman said.

Prior research has shown that ‘left-behind’ children experience a higher rate of injury and illness compared to others. They face discrimination by teachers, their communities and the media, Oyserman said.

The children spend their week living at school. When they are at home, they are mostly unsupervised, and that carries risks, Oyserman said.

“Part of why I wanted to look at this particular group is that China is an enormous piece of the world both in terms of population and in terms of future trends, and Chinese parents, like any parents, are willing to sacrifice an awful lot in the hope that things will turn out better for their kids,” Oyserman said.

“Taken together, our results imply that while ‘left behind’ is a stereotyped identity that primes children to be accepting of the hand of fate in their lives, this does not mean that children who actually are ‘left behind’ disengage from school,” Oyserman concluded for the study. “On the contrary, they seem to redouble their efforts.”

The School of Psychology at Southwest University in China funded the studies, which were published online in the Journal of Adolescence on Aug. 28.

In addition to a roundtable discussion on China, the retired general and former CIA director delivered lectures in courses ranging from modern leadership to foreign policy.

Students to bike across America to feed hungry children in China

Children left behind can overcome adversity