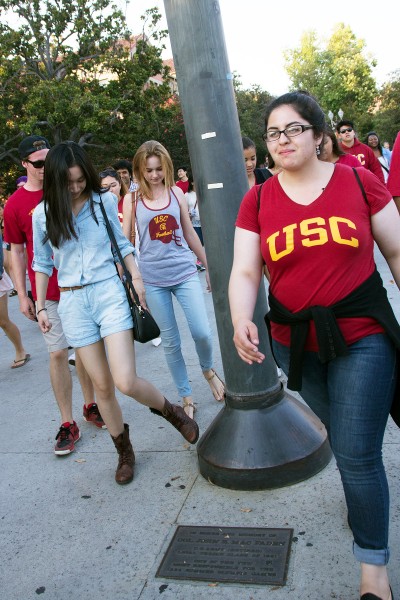 USC traditions are as varied as the people who have studied at the school since its founding 135 years ago.

But ask the current keepers of those time-honored customs just why they continue to do what’s been done for decades, and a theme develops:

“Traditions bind the past to the present and the future. They connect us all, throughout history,” said the man who, like many before him, guards Tommy Trojan from offenses, affronts and other violations committed by crosstown rivals.

“Traditions are a way to unite people across years or different schools within the university – or sections of our band,” said the Trojan Marching Band’s drum major, who, like many before him, willingly surrenders his conductor’s sword to star student-athletes after victories.

And the woman who, like many before her, helps the university put its best face(s) forward during football games turned the question around: What would USC be minus its traditions?

“Without them, I don’t know where we’d be right now.”

USC is welcoming a new class of students, and those will be the men and women carrying on the rituals of protecting one statue but rubbing another and perhaps sneaking an unauthorized ride on a third; kicking a pole; singing the songs; cheering the cheers; and screaming a scream.

We’re able to share stories and have a connection, despite the generation gap, because of tradition.

“I’ve talked to guys from classes in the 1940s,” said Annarella, alumni coordinator for the Trojan Knights, a philanthropic organization steeped in USC history. “And we’re able to share stories and have a connection, despite the generation gap, because of tradition.”

The Knights are responsible, in the days leading up to USC’s annual gridiron showdown with UCLA, for keeping watch over what’s officially known as the Trojan Shrine, although everyone knows the bronze warrior by his informal name, Tommy.

Bruins boosters have tried all sorts of attacks on Tommy, which requires evading the Knights’ protective phalanx formation. Paint has been a weapon, Annarella said, as was manure.

But if UCLA’s tradition is besmirching Tommy, just as traditional for USC is ensuring those vandals fail.

“They know we’re always there, even during Thanksgiving week,” said Annarella, whose 2015 duty watch will be his third.

As befitting a university with an esteemed football program, many school traditions revolve around home games.

In the countdown to kickoff, Trojans kick the last campus flagpoles on the walk to the Los Angeles Memorial Coliseum. Fans also rub the canine nose of the nearby George Tirebiter statue, dedicated to the stray dog adopted as school mascot in the 1940s.

Inside the Coliseum, the first two rows in the student section are occupied by the Helenes, USC’s official hostess organization. That’s where Winnie Quan can be found, presenting a friendly face to the team, recruits and, when a television camera comes by, the crowd (via the stadium’s video boards) as well the home viewing audience.

The Helenes participate in the Traveler Crew, helping the equine mascot and its Trojan rider around the field, Quan said.

USC has specific cheers and musical fanfares for various game situations, with the yell leaders and band exhorting the fans, a tradition that stirs Quan’s heart.

“They really hype up all the energy and makes you really proud to be a Trojan,” said Quan, a senior in art and graphic design.

School archivist Claude Zachary said the football program plays for traveling trophies against two rivals. The Victory Bell goes to the UCLA-USC winner, while at stake in the Notre Dame-USC game is the Jeweled Shillelagh.

The Trojan Marching Band seemingly has a number of traditions matching its 300 members.

Some are rewarding, such as when the members divvy up who gets to play at these road games: Seniors get the first picks, leaving freshmen doomed to wearing polyester in the desert heat of Tempe or Tucson.

Some serve as teachable moments, such as having members who mess up in practice run a lap as punishment. And some are supportive, with the non-running members giving high-fives and shouts of support to those on the run.

But drum major Chase Wagoner, taking a break from the hustle of preseason Band Camp last month, noted that the customs have a deeper purpose.

“We’ve been doing things the same way since 45 years, since Dr. [Arthur] Bartner became director,” Wagoner said. “That’s definitely a way to make it seem like a family.”

The band also plays a role during the school year’s two finals weeks. Each night during finals, Primal SCream takes place in front of Leavey Library, where the band plays a short set of USC standards while study-sated students can dance their troubles away or simply shout them into the music. 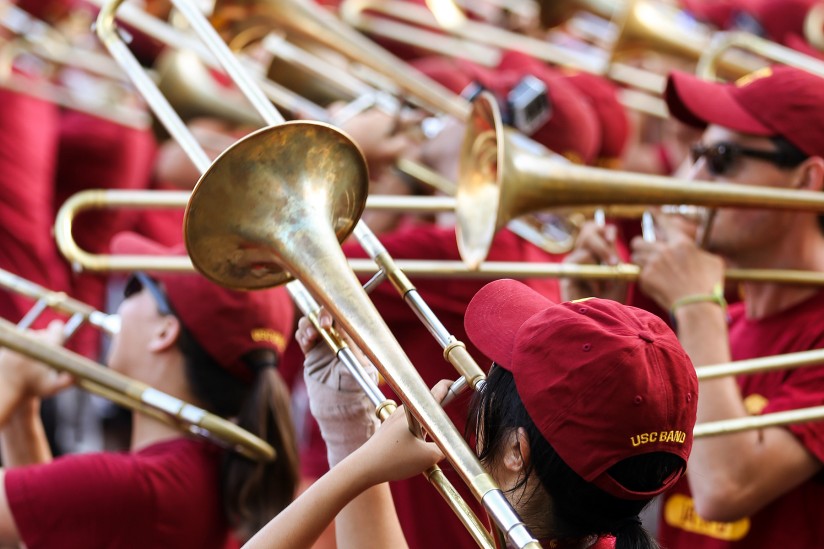 The USC Trojan Marching Band is at the heart of many USC traditions. (USC Photo/Daniel Zhu)

The venue’s trash cans will serve as containers holding contents bound for Central Valley farms, not the landfill.

Welcome Week wows the crowds with flair and fanfare

The engaging events are a golden opportunity to make new friends and hang out before hitting the books.