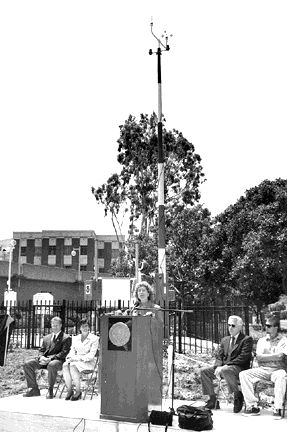 Above, Jane Pisano, senior vice president for external relations, at the commissioning of the new state-of-the-art National Weather Service station at USC. Looking on are Vickie Nadolski, director of the NWS Western Region; Richard Snouffer, director of energy services for Facilities Management; and Julian Herndon from the Wrigley Institute.

At 4:45 a.m. on Sunday, July 1, 1877, Sergeant C. E. Howgate of the U.S. Army stepped out on the roof of a building near Main and Commercial streets in the dusty frontier town of Los Angeles and took the first official downtown weather observation. The sergeant noted that it was 59 degrees, and he saw low clouds and fog – a condition destined to be repeated countless times for the next 122 years.

Since then, a continuous downtown Los Angeles weather record has been logged from eight different locations, anywhere from 4 feet to 220 feet above the ground, until finally, on June 30, the National Weather Service commissioned a brand new Automated Surface Observing System on the USC campus. The new station is now the official recording site for downtown Los Angeles weather.

“The new USC ASOS site, on the ground and only 3 miles from downtown, offers the optimal location and instrumentation for surface weather observations for the city of Los Angeles in the 21st century,” said Todd Morris, meteorologist in charge at the weather service’s Los Angeles/Oxnard office.

The weather service needed a secure site for its ASOS array, on the ground in a populated area, and found it in a triangle of land between Vermont Avenue and the David X. Marks Tennis Stadium.

“We hope that the community of Los Angeles will benefit for many years from the weather data that is gathered here,” said Jane Pisano, senior vice president for external relations, at the new facility’s commissioning. “We plan to use weather and climate data from this installation to control the temperature and the humidity in our buildings and to control irrigation systems on campus. By comparing the pattern of the university’s use of energy with weather fluctuations, we think we can improve the energy efficiency of our buildings and reduce utility costs.”

THE ASOS SENSORS provide minute-by-minute observations and reports on a variety of basic weather elements including:

• Visibility to at least 10 statute miles, and obstructions to vision such as fog or haze.

• Basic, current weather conditions, such as the type and intensity of rain, snow or freezing rain.

• Precipitation accumulation, and beginning and ending times of precipitation.

• Wind direction, speed and character (gusts or squalls, for example).

Campus buildings have set points to turn equipment on and off, Snouffer explained. Air conditioning systems, for example, are set to go on and off depending on outside air temperature and humidity. Sprinklers are set to skip a normal watering cycle when a certain amount of rain falls.

“We now have an authority on campus that we can refer to,” he said. “In the past, we used several instruments in different locations on campus and got readings that often did not match. Now we can refer to a single reading from the weather station.”

THE LINK BETWEEN USC and the weather service was established by Elizabeth Caporelli, research coordinator at the Wrigley Institute for Environmental Studies.

Two years ago, the state Air Resources Board, which was conducting a smog study, asked her if it could place weather instruments on the roof of the Hancock Building, where the institute is housed, and at its Marine Science Center on Catalina. Caporelli made the arrangements and contacted the weather service to see if it wanted to use the data. So, when NWS began searching for a downtown area ASOS site, its officials went back to Caporelli, who put them in touch with Facilities Management.

The USC weather station is the 719th ASOS array to be commissioned by NWS. Morris said that getting more information, more frequently and from more locations about atmospheric conditions is the key to improving quality and reliability of weather forecasts and warnings.

“This may be the USC campus, and these instruments may belong to the National Weather Service, but in a very real sense they belong to the greater community of Los Angeles,” Pisano said at the commissioning. “They provide information vital to business, to industry and to our individual lives.”