In 1930s Cologne, Germany, Maximilian Samuel was a beloved obstetrician-gynecologist and decorated World War I hero. He was also Jewish.

Deported to Auschwitz in 1942 with his family, Samuel was selected to become a prisoner-physician and ordered to participate in barbaric Nazi-directed medical experiments on women. As a result, historians labeled him a “Jewish medical collaborator.”

However, Sari Siegel, a doctoral student at the USC Dornsife College of Letters, Arts and Sciences, argues that Samuel and hundreds of other Jewish physician-prisoners in Nazi camps cannot be characterized so simply.

I try to avoid using the term ‘collaborator’ because it has such a negative connotation.

“I try to avoid using the term ‘collaborator’ because it has such a negative connotation,” Siegel said. “Instead I try to think of the actions of the prisoner-doctors as existing on a fluid spectrum between coercion and resistance, with those actions shifting according to a variety of factors.”

Siegel’s dissertation, which she is writing under the supervision of Wolf Gruner, holder of the Shapell-Guerin Chair in Jewish Studies, professor of history and director of the Center for Advanced Genocide Research, focuses on Jewish prisoner-physicians in Nazi camps from 1938-45 in the Greater German Reich. 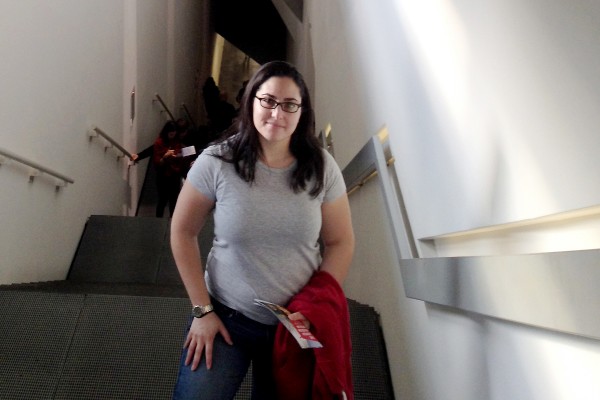 She was recently named a 2015-16 Jack, Joseph and Morton Mandel Center for Advanced Holocaust Studies Fellowship recipient for her research into the hitherto unexplored history of Jewish prisoner-physicians. The Mandel Center is housed at the United States Holocaust Memorial Museum. A living memorial to the Holocaust, the museum inspires citizens and leaders worldwide to confront hatred, prevent genocide and promote human dignity.

Samuel was the subject of Siegel’s case study, which appeared in the winter 2014 issue of Holocaust and Genocide Studies.

“The key to Samuel’s story is that in the absence of direct supervision, it seems quite probable that — at least in a few cases — he did not follow Nazi orders but instead helped fellow inmates and minimized harm,” said Siegel, who is currently wrapping up her six-month residency as a junior fellow at the Vienna Wiesenthal Institute for Holocaust Studies in Austria.

Samuel’s wife, Hedwig, was sent to the gas chamber upon arrival, but their daughter became a prisoner in the camp. Samuel must have feared not only for the loss of his own life if he did not obey, but also that of his daughter.

Nevertheless, Siegel’s research shows that in several cases Samuel appears to have defied orders when he was not being watched. His willful subversion of certain experimental protocols, for example, likely preserved the fertility of several women who went on to have children after surviving the war.

A spectrum of adaptive behavior

Siegel adopts Holocaust survivor and writer Primo Levi’s metaphor “The Grey Zone” to describe the morally ambiguous no-man’s land in which prisoner-doctors like Samuel and other prisoner functionaries found themselves.

“I’m calling for this coercion-resistance spectrum to enhance the concept of ‘The Grey Zone,’ as the former allows us to track a prisoner-physician’s behavior from one point in time to the next and relate changes to the development of environmental factors — both immediate and more distant,” she said.

Siegel believes prisoner-physicians can act as a lens through which to view the entire history of the Holocaust.

“Because prisoner-physicians were connected to the health of inmates, their presence in the camps and the way the Nazis and industrial firms facilitated — or didn’t — their work is largely indicative of the value the Nazis and factory owners placed on Jewish life at any given time,” she said.

Prisoner-physicians aided Nazi doctors with medical experiments, but also treated inmates to the best of their abilities.

“Their resources tended to be minimal, but at times the facilities in which they worked were surprisingly well-equipped with X-ray equipment and sterile surgical rooms,” Siegel said. “In stark contrast, others had absolutely no medication and no medical equipment. At this point, all they had to work with was their ingenuity.”

While other prisoner-functionaries, like kapos or block elders, were also seen as betraying their fellow inmates, doctors were held to a higher standard and can be perceived to have committed a “double betrayal” — of their fellow inmates and of the Hippocratic Oath.

“People have a specific and deep trust in doctors,” Siegel said. “And when that trust is violated it’s especially devastating.”

Interacting with a ‘virtual’ Holocaust survivor

USC Shoah Foundation recorded 53,000 testimonies of Holocaust survivors. Now they’s teaming with the school’s Institute of Creative Technologies to add 3-D and interactive elements that bring the testimonies to life.

Technology makes it appear as if you’re in the room with the subject, and a life’s worth of stories available for the asking. That’s the promise of the USC’s New Dimensions in Testimony project, Matt Lauer reports.

A visual history of the Holocaust

A group of visitors studied the bulky tape decks that lined the walls of the USC Shoah Foundation Institute, housed at the USC Dornsife College of Letters, Arts and Sciences.