The archive of Wayne Thom, a renowned architectural photographer who shot only with natural light, worked without assistants and meticulously printed his own images, is coming to USC Libraries.

Thom’s stunning photographs of landmark buildings throughout the American West and Asia will become part of USC Libraries’ collection early in September. His photographs include many buildings on the USC campus, including images of von KleinSmid Center, the 1968 USC Annenberg School for Communication and Journalism building, Heritage Hall, Varian Hall and others.

The Wayne Thom archive is a world-class addition to our collections from every perspective.

“The Wayne Thom archive is a world-class addition to our collections from every perspective,” said Catherine Quinlan, dean of the USC Libraries. “It extends our already strong holdings in the photographic history of Los Angeles and the American West. It strengthens USC’s position as a source for understanding Los Angeles as a Pacific Rim metropolis. And, most significantly, it makes certain that Wayne’s point of view will remain a vital part of scholarly and creative conversations among generations of researchers and artists.”

Thom, to put it mildly, is an archivist’s dream. He kept careful records of each of his 2,805 projects, scribbling appointment notes, proposals, flight times, client meeting details and observations into stacks of 8½ x 11 journals.

I had to be organized — I was a one-man operation.

“I kept a file for each project, with proofs, negatives, extra prints and notes,” said Thom, 82. “I had to be organized — I was a one-man operation.”

His archive also includes his extensive graphic design work. “I did lots of architectural brochures for clients,” Thom said. “In those days, we called it ‘corporate image’ work, a predecessor to corporate branding. My photographs presented their buildings to the world, and our design group presented their corporate identity.” 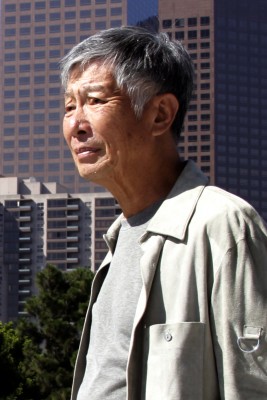 From the time he enrolled at the Brooks Institute of Photography in 1965 to the present (he hasn’t really retired yet), Thom has enjoyed long-term business relationships with many of Southern California’s famed architects. He credits A. Quincy Jones for introducing him to the architectural offices of William Pereira, Albert C. Martin and others, he said. “A. Quincy Jones was sort of my godfather.”

Jones later became dean of the USC School of Architecture, and got Thom involved with the USC Architectural Guild. Another link to USC Architecture came when professor and architectural historian James Steele approached Thom in the course of putting together a book on Pereira. It was Steele who introduced Thom to Quinlan.

“Wayne’s work captures an especially evanescent moment in national and regional history, during the late 1960s and early 1970s, when the supreme confidence in progress and technology, and seriousness embodied in the Modern Movement began to be tempered with the possibility of formal variation and hedonistic expression,” Steele said. “This historic collection represents an understudied period of our regional past.”

Thom, who was born in Shanghai, raised in Hong Kong and migrated to Vancouver before coming to California to study at Brooks, has photographed across the Pacific Rim, as well as throughout the Western United States. He uses a 4×5 Sinar view camera, a distinctive Swiss brand favored by architectural photographers and professionals doing advertising product work. Thom stuck with film until 2003, when he felt that the quality of digital cameras had improved enough for his exacting standards.

I use available light. I don’t even own a set of lights.

He uses a special light meter called a spot meter to time his exposures and create the proper balance between light and shadow. “You cannot light a big building,” he observed. “I use available light. I don’t even own a set of lights.”

He is similarly adamant about not using assistants (“they get in my way”) and prefers not to work with interior decorators. “I want to capture the space, not the products,” he said.

To get a taste of his singular vision before USC Libraries catalogues his archive, photography buffs can visit Light and Form, an exhibition going up Nov. 6 at Woodbury University’s WuHo Gallery at 6518 Hollywood Blvd.

Students honored for exceptional papers researched through the USC Libraries

Awards go to papers on women in Russia, language and works by Charles Dickens.

How flash photography shined a light upon life’s dark corners