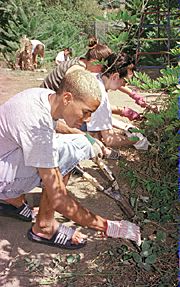 Richard Moore of Houston, a senior creative writing major, trims landscaping at Spiraling Orchard, a park in the Temple-Beaudry district.

IN BECKY SIPOREN’S hometown of Lodi, Calif., the neighborhood surrounding USC has a reputation of being “not so good,” but the freshman economics major couldn’t wait to throw herself into it.

She was one of 260 USC students – many of them freshmen – who joined forces two days before school began to spruce up their adopted neighborhood.

The students – along with about 50 community residents – spent several hours Aug. 28 gardening, painting, hauling trash, shelving books and doing other activities to enhance the community as part of the fifth annual Friends & Neighbors Community Service Day.

“I wanted to get out and meet people who care about the community,” said Siporen, who signed up for painting detail at Foshay Learning Center.

In all, 15 nonprofit organizations benefited from Friends & Neighbors activities, including six schools, a women’s shelter, a library and a community theater.

The event is designed to introduce new students to USC’s tradition of community service and to familiarize them with the neighborhood surrounding USC.

“Students have a genuine interest in learning about the neighborhood where they’re going to spend the next four years of their lives and in making a real connection with the people who live here,” said Michelle Blanchette, director of the Volunteer Center.

Since the program was launched in 1995, volunteerism has indeed increased at USC. In 1995-96, the Volunteer Center surveyed USC students and found that 8,217 of the university’s 14,800 undergraduates had participated in some kind of volunteer experience. By 1998-99, the last year for which figures were available, that figure had increased to 10,127.

Students Make Friends in the Neighborhood