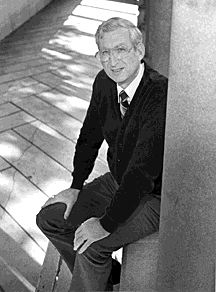 SOCIOLOGIST and psychotherapist Carlfred B. Broderick died of cancer July 27 at his home in Cerritos. He was 67.

Broderick was a professor of sociology in the College of Letters, Arts and Sciences and executive director of the university’s Marriage and Family Therapy Training Program. He was director of USC’s Human Relations Center, which trains graduate students in marriage and family counseling and chaired the sociology department from 1989 to 1991.

In addition to teaching and leading the Marriage and Family Therapy Training Pro gram at USC, Broderick was a relationship counselor himself. A behaviorist, he helped marriage and relationship partners in crisis by teaching them “working tools” for real-life situations.

His research findings and views on courtship, marriage and human sexuality were featured in Time, Life, Newsweek, the New York Times, the Wall Street Journal and many other publications. A lively and humorous speaker, he was a frequent guest on radio and television talk shows – appearing 10 times on Johnny Carson’s “Tonight Show” during the 1970s.

Among the many books Broderick wrote were Under standing Families (Sage, 1993), the widely used college text Marriage and the Family (Prentice-Hall, 1979, 1983, 1988, 1992) and Couples: How to Con front Problems and Maintain Loving Relationships (Simon & Schuster, 1979). He was editor of A Decade of Research and Action on the Family (National Council on Family Relations, 1971) and co-editor (with J. Bernard) of The Individual, Sex and Society (Johns Hopkins University Press, 1969).

He was a past president of the National Council on Family Relations, which honored him with its Distinguished Service Award in 1989 for his “outstanding contributions to the field of family therapy.”

Broderick was born April 7, 1932, in Salt Lake City, Utah, and was reared in Long Beach. He married the former Kathleen A. State in St. George, Utah, in 1952. The Brodericks raised eight children.

The family has requested that, in lieu of flowers, contributions be sent to the American Cancer Society.