Two years spent collecting and analyzing eastern chimpanzee fecal samples from an unprotected region in Uganda has revealed a far larger population of the primates than previous estimates suggested for the area.

In the shrinking forest fragments between Budongo and Bugoma reserves — a roughly 1,200-square-kilometer area along Lake Albert on Uganda’s western border — researchers found evidence for roughly 250 to 320 chimpanzees. Previous estimates, based on counting nests from the ground, put the population at around 70.

The clustering of the genotypes suggests that there are at least nine communities of between eight and 33 individual chimpanzees, said Maureen McCarthy, a Ph.D. student who conducted the research at the USC Dornsife College of Letters, Arts and Sciences.

A paper about her discovery was published in the journal BMC Ecology on Aug. 25.

“Our results show a surprisingly widespread and large chimpanzee population in this region, especially given the extent of habitat loss there,” McCarthy said.

There are an estimated 76,400 to 119,600 eastern chimpanzees left in the world, of which about 5,000 live in Uganda, according to a 2010 report by the International Union for Conservation of Nature, which classified them as “endangered.”

The population that lives in the region McCarthy studied is important because it represents the growing status quo for these chimpanzees — no longer inhabiting wide, unbroken swaths of forest, they instead carve out an existence in shrinking forest patches. 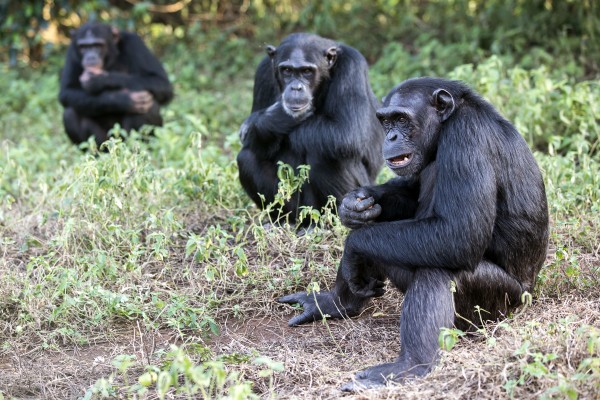 The chimps are carving out an existence in shrinking forest patches. (Photo/Courtesy of International Fund for Animal Welfare Animal Rescue)

Because the area is unprotected, the chimpanzees are vulnerable to trapping. And the fruit trees that they rely on for food are rapidly being cut down, McCarthy said.

“Hundreds of kilometers of forest are estimated to have been lost in this region in recent years, and we saw plenty of evidence of this while collecting data. Each time we revisited an area, we found fewer trees than the last time we were there,” she said.

Next, McCarthy will analyze her data to see whether the chimpanzees are using the fragments as a corridor to move between the two reserves or whether the populations in those reserves are genetically isolated.

Maureen McCarthy’s work is groundbreaking for the study of great ape population genetics.

“Maureen McCarthy’s work is groundbreaking for the study of great ape population genetics and has important implications for wildlife conservation,” said Craig Stanford, McCarthy’s faculty adviser at USC. “Her work shows that as African forests shrink from human disturbance, chimpanzee populations can be surprisingly resilient. She hopes to discover whether forest corridors allow for continued movement by chimpanzees despite severe forest fragmentation.”

Stanford, a co-author on McCarthy’s paper, is a professor of biological sciences at USC Dornsife and co-director of USC’s Jane Goodall Research Center.

McCarthy collaborated with Linda Vigilant, Jack Lester and Mimi Arandjelovic of the Max Planck Institute in Germany and Eric Howe of the University of St. Andrews in the United Kingdom. The research was funded by the American Society of Primatologists, the German Academic Exchange Service, the Max Planck Society, the USC Jane Goodall Research Center, USC Dornsife, the Nacey Maggioncalda Foundation and Primate Conservation Inc.

James Askew will spend nine months each in Northern Sumatra and East Borneo.

Heading toward a world without apes

Great apes could face extinction within our lifetime, USC biologist Craig Stanford warns in a book that will be published on Nov. 5.