Dave Chapman PhD ’88 recalls traveling through Indonesia with a group of veterinarians. They stopped in different villages, setting up makeshift animal clinics and spaying and neutering hundreds of stray dogs.

As a newly licensed veterinarian, Chapman — who earned his Ph.D. in chemistry from the USC Dornsife College of Letters, Arts and Sciences — had joined the Bali Street Dogs Foundation, a nonprofit with a mission to reduce the stray dog population in rural Indonesia without resorting to euthanasia.

“We went with a group of Indonesian handlers, who would trap the dogs and bring them back to the town halls, which were pretty much the equivalent of a covered, open area,” Chapman recalled. “Then we would set up a production line of sorts for the surgeries. This was the most humane way to control the population.”

And it worked. “We saw pretty significant population reductions,” he said, noting that the organization has since closed.

Originally from Yorkshire, England, and a family that included dogs, cats, rabbits, and guinea pigs, Chapman was always drawn to veterinary medicine. However, after having had great experiences with chemistry teachers early on, Chapman chose that route.

After graduating and taking a postdoctoral position at a nonprofit, Chapman “started dreaming of something I had always wanted to do when I was younger,” he said. “And I decided to apply to vet school.” 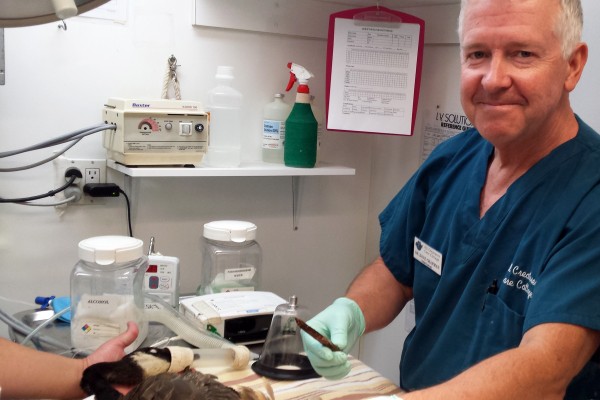 Chapman earned his veterinary degree from Washington State University in 2000 — during which time he took every opportunity to gain a global perspective on animal medicine.

He spent one summer as a student studying the incidence of snake bites on livestock in Nepal.

“There are several poisonous snake species in Nepal, but not a lot of literature on how snake venom affects the animal population there,” he explained. “I worked for the Katmandu-based National Zoonoses and Food Hygiene Research Center, which was partnering with an NGO from Japan that wanted to build a plant to produce anti-venom in Nepal because at the time they had to get all of their anti-venom from India, which was very expensive.”

Also during veterinary school, Chapman volunteered at a wildlife rehabilitation facility in Costa Rica called Jardin Gaia, which also has closed. In addition to seeing five to six different species of parrot, Chapman recalled caring for “a lot of squirrel monkeys, a couple of howler monkeys and an injured sloth.”

Releasing the birds back to their natural habitat was generally successful, Chapman said. “It was much more problematic with the primates. A lot of times you release them back into the wild and they get attacked by the native population.”

Establishing a practice at home

In the last 15 years, Chapman has worked as a more traditional animal healer, ultimately purchasing a flourishing private practice called “All Creatures Care Cottage” in Costa Mesa in 2005. Although the majority of his clients are of the canine and feline variety, he also sees a number of more exotic pets such as parrots, miniature pigs and the occasional degu, a rat-like mammal indigenous to Chile.

Chapman is generally unfazed by the diversity within his patient population.

I think having had an advanced degree really gave me an exposure to critical thinking, and most science subjects rely on the doctor’s ability to analyze situations quickly and critically.

“I think having had an advanced degree really gave me an exposure to critical thinking, and most science subjects — including veterinary medicine — rely on the doctor’s ability to analyze situations quickly and critically.”

He attributes much of his intellectual flexibility to the USC Department of Chemistry.

“In addition to having strong faculty, the department had a very collaborative attitude, so I had the opportunity to work with professors in other fields, especially biology,” Chapman said.

While learning biochemistry and anatomy was relatively straightforward, Chapman admits that managing the emotional toll it takes to be a veterinarian can be more difficult.

“It’s really hard to see people who want to do the best for their pets but are unable to pay for medicines and procedures,” he said. “There is only so much you can do to help them while maintaining the integrity of your business.”

One way in which he gives back is by providing veterinary care to The Wetlands and Wildlife Center of Orange County, a wildlife rescue facility that treats and, when possible, releases sick and injured native species back into the environment.

“On any given day, it’s not unusual for me to be stitching up pelicans or removing fish hooks,” he said.

He also makes frequent trips to Mexico, where he brings supplies to an underserved veterinary clinic in Baja.

More than anything else, Chapman believes that what separates a good vet from a great vet is empathy.

“Ninety percent of veterinary medicine is your relationship with the two-legged client,” he said. “I deal with many different characters — a lot whom come to me in very vulnerable states — so unless I can communicate clearly and effectively, I probably can’t do the best for the animals.”

Even when it looks as if she’s not working, creativity comes for alumna and motivational speaker Barbara Jo Gallagher.

Classical music goes to the dogs — and cats

During Classical KUSC’s successful spring pledge drive that ended on May 11, listeners called in pledges to honor their mothers for Mother’s Day, congratulate new graduates and celebrate the vital role the station plays in their lives.

Valery Fokin will join the school’s top scientists as USC aims to be among the world’s top institutions for convergent biomedical research.

USC alumnus cares for all creatures great and small