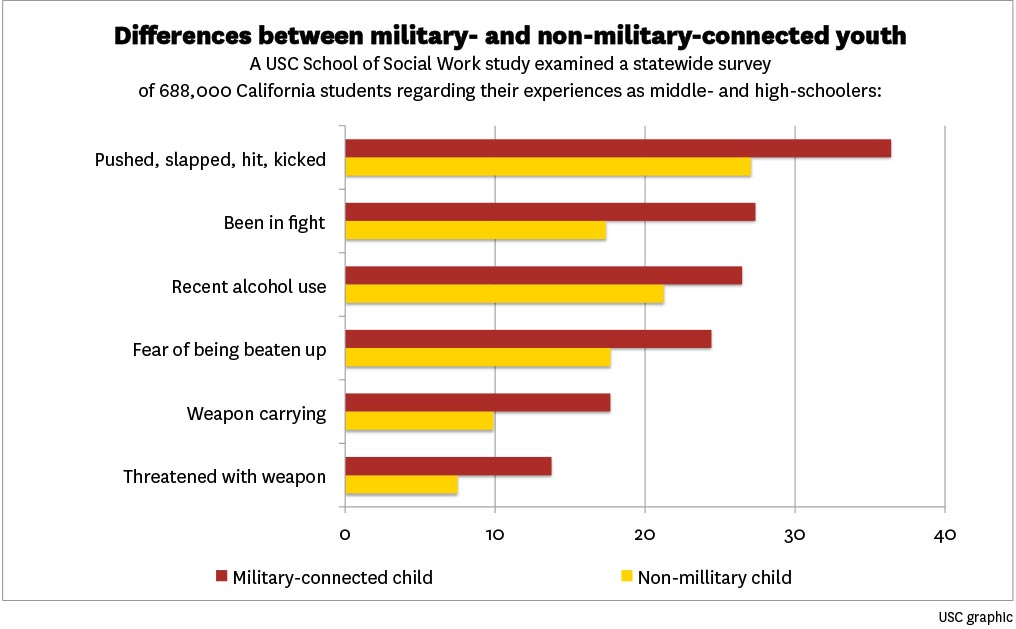 Growing up in a military family during times of war puts a sizable proportion of children at a greater risk for a wide range of negative outcomes — drug use, being bullied or carrying a weapon to school — compared to their non-military peers, according to a new study appearing this month in JAMA Pediatrics.

More military-connected students reported using alcohol (45 percent vs. 39 percent), being hit, kicked, slapped or pushed (36 percent vs. 27 percent) or bringing a gun to school (10 percent vs. 5 percent) than other students, researchers from USC and Bar Ilan University in Israel reported.

Children with parents or a caregiver in the armed forces were much more likely to have used prescription medications (36 percent vs. 27 percent), brought a knife to school (15 percent vs. 9 percent), been in a fight (27 percent vs. 17 percent) or feared being beaten up (24 percent vs. 18 percent).

It is estimated that 4 million students nationwide have had parents serve since the start of the wars in Iraq or Afghanistan, and most are currently are enrolled in U.S. public schools.

Previously, military-connected children had been a largely invisible population in public civilian schools and rarely studied, said co-author Ron Avi Astor, a professor at the USC School of Social Work and the USC Rossier School of Education.

These results suggest that a sizable subset of military-connected students are struggling to cope with the ramifications of two long wars.

“These results suggest that a sizable subset of military-connected students are struggling to cope with the ramifications of two long wars,” said Kathrine Sullivan, a Ph.D. student in social work at USC and the lead author of the paper. “While a lot of military kids are still doing well despite these stressors, many are in need of more support.”

“There is something very concerning that military-connected students may be more vulnerable due to their families’ involvement in protecting the U.S. during war,” said Rami Benbenishty, professor of social work at Bar Ilan University.

While the number of non-military children who reported non-physical bullying — being the target of sexual jokes, rumors or cyber victimization — was alarmingly high at 59 percent, non-physical victimization was still higher (66 percent) for military-connected students.

“The findings suggest that health risk and behavior issues among military-connected students should not be viewed in isolation,” said Tamika Gilreath, co-author and assistant professor at the USC School of Social Work. “It is likely that youth who experience difficulty with substance use are the same youth who might have problems with victimization.”

Compared to the 2011 data, the 2013 statewide results related to substance use, victimization and carrying a weapon were noticeably higher for military connected students. “War-related stressors” may accumulate over time, leading to higher rates of those behaviors two years later, the study stated. A recently published study by the same group also found that statewide military students exhibited higher suicidal behaviors and thoughts than their civilian counterparts.

“It is important for schools to know who their veteran- and military-connected students are, and to be able to assess their needs and provide support,” said Gordon Capp, co-author and Ph.D. student at the School of Social Work.

“Our country needs to invest in providing civilian and community support to the estimated 4 million children who had parents serve during wartime — given the broad picture of risks facing this sizable group of military children, this is the least we can do as a nation to show our gratitude and care after the longest war in our country’s history,” Astor said.

Military-connected students in middle and high school were more likely than nonmilitary students to be physically victimized, a new study reports.

Children in military families at higher risk for a variety of problems, study finds

How Greece let in tourists and kept out COVID-19

Researchers from USC and the University of Pennsylvania collaborated with a private company CEO to help Greece do more with less and curb COVID-19’s spread when the country reopened to tourists.

As chair of the presidential board, Carpten will be in a position to guide the nation’s cancer research efforts.