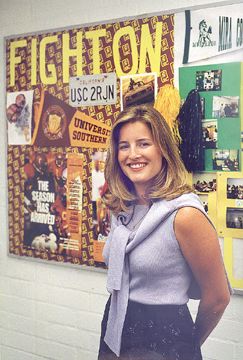 Janine Jellander celebrates her Trojan background with a special bulletin board in her Mira Costa High School classroom.

“My kids say, ‘Boy, you eat too much chocolate!’” said Jellander, a graduate student at USC’s Rossier School of Education.

It appears to be a winning philosophy. The geography and history teacher was selected as the best first-year teacher in California for 1999 by the American Association of School Administrators. Jellander will receive the award at a Sept. 17 ceremony in Washington, D.C.

Jellander is the second USC graduate student in three years to be singled out for statewide education honors. In 1997, Howard Lappin, principal of Foshay Learning Center, was named Principal of the Year by the Association of California School Administrators. Like Jellander, Lappin is working on an Ed.D. at Rossier.

“Clearly we’re doing something right,” said Guilbert Hentschke, dean of the Rossier School. “We’re really proud to be attracting and educating the kind of students who are making a significant contribution to what arguably is the most important field in the world: educating our nation’s youth.”

The award caps a harried year for the 25-year-old Jellander, who juggled long days at Mira Costa with the demands of graduate-level course work. Like her students, she hit the books every school night and weekend. But unlike them, she also had to map out what they’d learn the following day. Despite her heavy academic schedule, she somehow found time to coach the powder puff football team, announce for the school marching band during football games and serve as yearbook adviser.

“I can’t think of anyone who deserves this award more than she does,” said Larry Picus, a professor of educational policy, planning and administration and Jellander’s academic adviser. “I’m always surprised by her hard work and dedication and her unending enthusiasm for the task.”

The award, which includes a $1,500 prize and an expense-paid weekend in Washington, D.C., was launched 15 years ago by Sallie Mae (the Student Loan Marketing Association). Nation ally, the program received more than 1,400 nominations. One teacher was chosen to represent each state; Jellander was selected from among 104 entries from California.

A third-generation teacher – her mother is a veteran educator in Moorpark – Jellander cooks up such genuinely engaging assignments as making a textbook or writing and delivering a speech in the spirit of a famous world leader.

Even though Jellander re ports to school at 6 a.m. as the teacher of a “zero period” or 7 a.m. elective course, she lingers up to three hours after the last bell rings at 2:48 p.m. to be on hand for students with questions. Jellander also shows up for their athletic matches and performances.

“It’s easy to get lost in the loop, and I remember that,” Jellander said.

NOT BAD FOR a self-described former “academic airhead” who was better known at Thousand Oaks High School for organizing pep rallies and powder puff football games than for exhibiting scholastic excellence. The death of her twin brother, Michael, in her senior year of high school served as a wake-up call.

“I really wanted what he wanted,” she said. “He had been accepted to USC, but I just didn’t have the grades.”

After two years at the University of Northern Colorado in a special probationary program for students with high school GPAs below 3.0, Jellander transferred to USC in 1994 as a junior. The history major’s GPA in her final semester: 4.0.

Jellander uses the example of her own life to try to motivate her students.

“The message to them is, no matter your failures in high school, you can become a success,” Jellander said. “It just takes effort and determination.”

As a Teacher, Rossier Student Is a Winner