His beard may be streaked with gray, but Oliver Mayer hasn’t lost touch with his inner freshman. It’s the secret to his success as a resident faculty master.

“I’m several generations removed from these kids,” said the playwright and associate professor at the USC School of Dramatic Arts, referring to the hundreds of Parkside Residential College students who look to him as a kind of surrogate father. “I still feel close to the 17-year-old who I was.”

Freshman year is etched in his memory.

“My father was very ill and dying of cancer, so it was a very sad time in my life,” said the Los Angeles native. Moving to Ithaca, N.Y. — where he didn’t know a soul — only ratcheted up the emotional turmoil, but with the encouragement of caring faculty and administrators at Cornell University, Mayer soon settled in and found the will to persevere in his studies.

Over the past decade, he has strived to fill the same supportive role at USC. 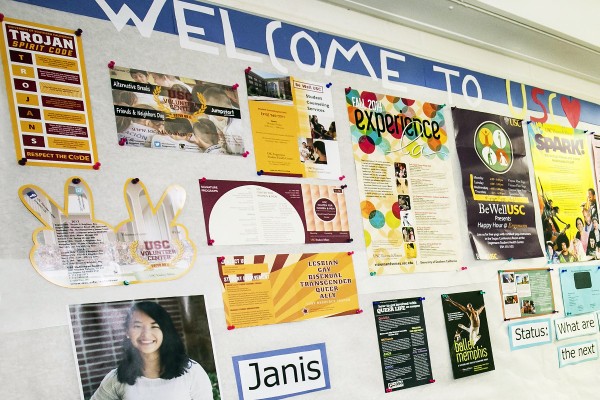 A big part of the faculty master’s job is creating programming, such as the Tuesday dinners Mayer and Borden alternately host. Intriguing guest speakers have included former world champion female boxer Lucia Rijker and actress Elizabeth Rodriguez (Orange Is the New Black). The typical Master’s Dinner, held in one of Parkside’s multipurpose rooms, draws up to 80 student residents. Dinner segues to a dessert reception at the faculty master’s home, where the conversation continues.

Mayer always asks his invitees this question: “Who were you at 17 or 18 and how did you get from there to who you are now?” It’s a theme the award-winning USC teacher and faculty mentor never tires of investigating.

Mayer and his wife, Marlene Forte, a professional actress, have no other home than Parkside, where they share a two-bedroom apartment with their dog, Don Aldo, and cat, Cheese. Until last year their daughter, Giselle Rodriguez, a 2014 graduate of the Master of Professional Writing program, lived there, too.

Mayer calls it “a normal life.” It’s just that there are hundreds of undergraduates milling around at all hours. Being a faculty master isn’t for everybody, he admits. It requires a certain “youthful mindedness, an openness and generosity to young people.”

It helps to have a gregarious mutt.

“Don Aldo is the greatest ice-breaker there is,” Mayer said of the mixed-breed charmer he walks three or four times a day around Parkside. Don Aldo has become a local celebrity since his owner penned a children’s book (Big Dog on Campus Learns to Be a Trojan, 2014) about his adventures. A sequel, Big Dog on Campus Goes to the Library, is being released during Welcome Week and will be available at the USC Bookstore.

After living on campus for 10 years, Mayer has made thousands of Trojan friends. Many have stayed in touch.

It’s really wonderful when they come back to visit and I get to find out what’s going on in their lives.

“It’s really wonderful when they come back to visit and I get to find out what’s going on in their lives,” he said. He bumps into them on the road, too. “Whenever I go to Chicago, Miami, even to another country, I’ll run into someone I met here at Parkside.”

No matter how many students Mayer befriends, memories of his own emotionally fraught freshman year spur him to keep reaching out to new arrivals. “It’s really important that we get this right,” he said. “These kids are coming from all over the world, and we have to keep faith with them.”

Few will have to come to terms, as Mayer did, with a dying father.

“Hopefully most will just sail through freshman year,” he said. “But stuff happens. It may be getting that first C or that first romantic breakup. A family member may get ill. Sometimes they grow out of love with the thing they thought they were going to do at USC, and they have to start on a different track. Many of our international students miss their culture, miss speaking their native language.”

A Parkside tradition of celebrating all international holidays — from Chinese New Year to Diwali — helps relieve some of the homesickness.

Mayer sees his role, in general, as helping students over whatever bumps and hurdles come their way.

“They need to know that there are people here who care,” he said, “and that others have gone through similar experiences and come out stronger.”

For USC Provost Elizabeth Garrett, the value of the university’s residential colleges isn’t a theory: It’s a firsthand experience.

Highlights of the four-day event included a concert by A Flock of Seagulls, the Trojan Family Weekend Tailgate and a win against the Washington State University Cougars.

Meet the master of the house at Parkside Residential College