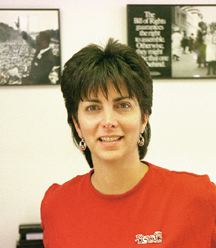 A LAW SCHOOL ASSOCIATE DEAN has been selected to help set up two law clinics and consult with eight law schools in the former Soviet republic of Moldova.

Karen Lash, who has been active for more than a decade in mobilizing law student volunteers at USC, will join a contingent of U.S. and Moldovan legal reformers between Oct. 6 and Nov. 15 in the Eastern European country.

“The project is based on the idea that lasting economic and political reform is dependent on a functioning legal system,” Lash said. “It’s thrilling to think I’ll be helping Moldova modernize legal education and improve access to justice for women and children.”

The Central and Eastern European Law Initiative, a public service project of the American Bar Association, is organizing the effort. The project is designed “to advance the rule of law by supporting the law reform process underway in Central and East Europe and the new independent states of the former Soviet Union,” according to the ABA.

Moldova, which shares borders with Ukraine and Romania, became an independent state one day after the USSR disbanded on Aug. 26, 1991. The country is home to more than 4.57 million people who speak Moldova, a dialect of Romanian, and Russian. The country is one of the poorest in Europe, with state employees earning an average of about $35 a month.

In partnership with volunteer professional and student groups in Moldova, CEELI has helped to draft the former Soviet republic’s constitution and criminal code, establish a law protecting the freedom of information and the press, and develop a state-of-the-art law library.

Lash will collaborate with another American lawyer; Moldavan CEELI staff; Moldovan representatives of the judiciary, law faculties, law student associations and Ministry of Labor; and a new Moldovan association of women in legal careers.

Her activities will include:

• Expanding an existing legal clinic in Chisinau, the capital of Moldova, to address women’s and children’s legal issues.

• Opening another legal clinic specializing in domestic violence issues in Balti, a smaller city about one hour north of Chisinau.

• Consulting with the deans of Moldova’s leading law schools and departments about the value of clinical legal education, in which students hone legal principles while working on actual cases. A staple of the U.S. law school experience, the approach is unfamiliar to Moldovan law school faculty.

A USC Law School alum, Lash has been instrumental in encouraging volunteerism and participation in public interest law at the school. After coming to work at the Law School in 1991, she vastly expanded its internship program. She also helped establish a legal clinic serving residents of USC’s neighborhoods.

With a new movie, a comic book series and Krampus-based festivities growing in popularity, the scary Alpine holiday legend has gained a firm foothold in America.

A Legal Hand Extends to Moldova