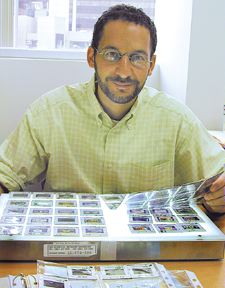 The pudgy cheeks and chubby thighs of infancy are certainly adorable, but a truly overweight child may be heading down a road to a lifetime of health problems – and that’s not cute at all, says Michael Goran, a world-renowned expert in childhood obesity and one of the Keck School of Medicine of USC’s newest faculty members.

“There’s a difference between baby fat and childhood obesity,” said Goran. “Kids will grow out of baby fat. What’s dangerous is if a child is really overweight.”

APPROXIMATELY ONE IN four American children are obese, said Goran, who joined the faculty on Aug. 1 as visiting professor of preventive medicine and associate director of the Institute for Prevention Research. The exact figures are hard to pin down because it’s difficult to define obesity in children, whose weight and height (both of which are needed to calculate the healthiest weight range) are continually fluctuating. Goran believes, however, that the real numbers are likely to be even higher – perhaps as high as one in two children, in some populations – and are growing all the time.

And the problem is not one to take lightly: Children who are overweight at the age of 3, he explained, have only a 10 percent to 20 percent chance of being obese as adults. But if they lug those extra pounds around for another decade, that risk can skyrocket. As many as 80 percent to 90 percent of heavy 13-year-olds will be obese adults.

“What has changed to cause this global epidemic is the environment in which we live,” Goran said. “There’s a decreased availability of physical activity now. Because of crime, for instance, parents are less likely to let kids go out and play, and schools don’t let kids play unattended and in open areas. From an eating standpoint, fast foods, both in school and at home, and lack of family time are major environmental factors leading to obesity.”

A native of Glasgow, Scotland, Goran came to the United States in 1987 to do his postdoctoral work at the University of Texas Medical Branch in Galveston, where he studied energy metabolism in children recovering from burns.

By the time he’d moved on to the University of Ala bama at Birmingham, he was already recognized as an expert in childhood obesity. There, as director of the division of physiology and metabolism in the department of nutrition and associate director of the obesity research center, he began looking not only at obesity, but at its relationship with ethnicity – and at the connection between obesity and health.

IN HIS MOST RECENT STUDY, published in the journal Diabetes in August, Goran and colleagues found that the risk of type 2 diabetes was greater for obese than non-obese children, and greatest in obese African-American children.

“Actually,” Goran noted, “at any given level of fatness, the risk of diabetes was higher for the African-American children than for Caucasian children. We had hypothesized that the increased risk for these children was explained by obesity factors, but this told us that that’s not the whole story. I’m now interested in figuring out the rest of that story – and what environmental, dietary or physiological factors play a role in it.”