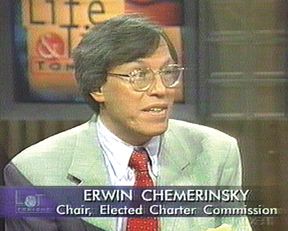 Erwin Chemerinsky as he appeared on KCET’s “Life and Times” before the June 8 voter approval of the new city charter.

But Chemerinsky’s efforts on behalf of charter reform also earned him praise from political observers and the gratitude of city officials.

Chemerinsky, the Sydney M. Irmas Professor of Public Interest Law, Legal Ethics and Political Science, chaired one of two citizens commissions charged with overhauling the 700-page document that had governed – some would say hamstrung – city operations since 1925.

“His clarity and leadership brought together a consensus that would have been impossible without him, and that consensus was absolutely necessary,” said Los Angeles Mayor Richard Riordan. “It absolutely wouldn’t have happened without him.”

Chemerinsky, however, attributes the movement’s success to George Kieffer, the chairman of the appointed charter reform commission.

“He was absolutely fantastic,” Chemerinsky said.

“That’s the nature of Erwin – he attributes his glories to others,” said USC political scientist H. Eric Schockman, who served as the pro bono policy director for the elected charter commission. “Those of us who are going to live in the second-largest municipality in the next century are going to benefit from Erwin’s heroic efforts in keeping charter reform alive.”

At times, the drawn-out process put Chemerinsky, a well-known legal commentator, on a collision course with City Council members and Riordan.

As chair of the elected charter reform commission, Chemerinsky renewed acquaintance with the desperate measure that’s more familiar to harried students than dignified scholars: the all-nighter.

The municipal equivalent of a constitution, a city charter creates institutions of government and allocates power among the city’s council members, mayor and professional staff.

Los Angeles’s new 143-page charter significantly strengthens the power of the mayor’s office, institutes a citywide network of neighborhood councils, clarifies the role of the Police Commission’s inspector general and requires regular audits of city finances. However, two competing proposals on the June 8 ballot to expand the size of the council failed to win a majority.

Chemerinsky’s role in charter reform won him admiration and press attention, but few remember that he was not the only Trojan to lead such a charge.

Between 1966 and 1970, Henry Reining Jr., then dean of international affairs, chaired a commission that also tried to rewrite Los Angeles’s cumbersome city charter.

“USC has a proud legacy in charter reform,” said Schock man, who is also associate dean for student affairs.

THE NEW CHARTER included several changes originally proposed by the Reining Commission, most notably the increase in the power of the mayor, the establishment of neighborhood councils and the decentralization of decision-making in planning.

But if the Reining Commission helped chart the course for successful reform, its failings also served as a cautionary tale for Chemerinsky and the elected charter commission.

Victory at first seemed assured for the Reining Commission’s proposals, which were largely hammered out behind closed doors and adopted with very little opposition by the City Council. But as the election drew near, opposition suddenly grew.

Chemerinsky, vowing not to make the same mistake, said he made sure the public had an opportunity to comment at commission meetings, which sometimes dragged on for eight hours.

“We learned that charter reform needed to be a very public process and that we needed to build consensus as soon as possible,” Chemerinsky said.