Her quiet dignity captured for all time, an elderly African-American woman is pictured in her simply furnished but spotless home. Taken by photographer Gordon Parks in 1942, the black-and-white photograph shows Ella Watson, a cleaning woman at the Farm Security Administration (FSA) offices in Washington, D.C.

“Parks’ images of Watson are terrific because they show so much strength of character and an internal pride in her domestic situation,” said Kate Flint, Provost Professor of Art History and English and chair of art history at the USC Dornsife College of Letters, Arts and Sciences.

Parks is one of many outstanding photographers featured in Flint’s current research project Flash! Photography, Writing and Surprising Illumination. The project situates flash photography at the intersection of material history, technological change and imaginative expression.

This project asks what distinguishes the medium and its impact.

“Flash photography is radically different from all other forms of photography,” Flint said. “This project asks what distinguishes the medium and its impact.”

Her research draws on photographic manuals, magazines and memoirs, lyric poetry and crime fiction, advertisements and film — and includes analysis of many striking images — to examine how the language of photography moves between art and science, specialist aesthetics and popular imagination, fascination and revulsion.

The project is closely related to Flint’s Thematic Option course on writing and photography at USC Dornsife. Its focus was sparked by an invitation she received to participate in a day conference about light.

“Once I looked at the language and metaphors used to describe this new technology, I became fascinated by how its development was connected to technological issues in everything from the military to the film industry,” she said.

“In the 19th century, there was tremendous excitement about how flash photography enabled people to take photographs of places that had never been photographed before, like caves, catacombs or the interior of the Great Pyramid,” Flint said. “Now you can take photographs inside theaters or at home or of your children opening their Christmas presents.”

But as flash photography became commonplace, and particularly after the development of the flash bulb around 1930, public perception shifted.

“It became associated with intrusiveness, with exposés, with flash guns going off in celebrities’ faces,” Flint said. “It’s a narrative of photography that goes from wonder to detestation.

“Flash photography was part of the history of both public and private, commercial and vernacular photography. It threw into question a lot of the assumptions we have about what photography is.”

Flash photography is distinguishable by its strong contrasts. Flint notes this is immediately noticeable in the work of photographers like Jacob Riis and other social photographers in the early 20th century, such as Lewis Hine who photographed slum interiors and workplaces, using their cameras as tools for social reform. 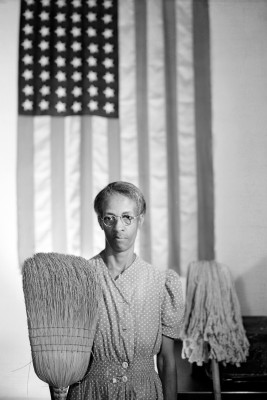 “The flash reveals aspects of rooms that their inhabitants likely never noticed day-to-day and certainly never saw before with such clarity,” she said.

Flint’s project shows how flash photography illuminates the dark corners of our lives — perhaps even of our souls.

Examining connections between flash and violence, she noted that Weegee — perhaps the most famous of crime photographers — was less interested in focusing, as so many photographers did, on the corpse, the blood stain or the dropped gun.

“Rather, he was interested in the responses of the people watching, in those faces that suggested horror or shock or — more chillingly — fascination at being in the presence of death and violence,” she said. “In that way, a lot of his photographs of people observing crime scenes uncomfortably resemble faces of people illuminated by flash in lynching photographs.”

However, rather than focusing on Riis and Weegee, arguably the two best known flash photographers, Flint has concentrated on lesser known proponents such as Jessie Tarbox Beals, a photographer of 1920s bohemian New York.

Gaining the trust of subjects

She has also explored the work of 1930s FSA photographer Russell Lee, known for his photographs of rural poverty in New Mexico and Arizona.

“Many FSA photographers avoided using flash because they felt it was intrusive, but Lee didn’t agree,” Flint said. “He was someone who really got to know his subjects, gained their trust and photographed them in their homes.”

She was recently awarded a fellowship by the American Council of Learned Societies for excellence in research in the humanities and related social sciences. She has also been awarded fellowships by the National Humanities Center and the Georgia O’Keeffe Museum Research Center in New Mexico.

Flint stresses the interdisciplinary nature of her project.

“It looks at the history of photography but also at the history of technology, as well as literature, fiction, poetry and film,” she said. “All are linked through the interplay between the visual and verbal languages of modernity.”

How flash photography shined a light upon life’s dark corners