He smashes the ball during a serve … he hustles cross-court to return volleys … a restrained backhand sends the ball just out of reach of his opponent.

These are the marks of a tennis player near the top of his game. It’s also evidence of what Fried’s physical therapist and tennis coach refer to as “his genius” because, as a competitor in the Special Olympics World Games, the 53-year-old athlete is able to accomplish all this despite profound intellectual and physical disabilities that might sideline lesser players.

“Jonathan is often times much more disabled than the people he’s playing against,” said his Virginia-based physical therapist David Luedeka, who has worked with Fried for the past two years.

Fried has an IQ of about 70, according to Luedeka. He functions at the level of a first- or second-grader. He also suffers from major neurological and orthopaedic problems, including a debilitating foot issue. Perhaps most impressive, however — particularly in a sport that’s all about hand-eye coordination — is Fried’s monocular vision.

Whereas most sighted people’s brains will merge the two distinct images from each eye, Fried’s brain does not. He constantly sees two images at once — one through the right eye and one through the left — giving him limited depth perception and making tennis all the more challenging.

Tennis is his gift, and he demonstrates that to us every time he plays.

“To watch Jon play tennis is really to realize his genius,” Luedeka said. “Tennis is his gift, and he demonstrates that to us every time he plays because he does things he really shouldn’t be able to do.”

Inspiring confidence in the athletes

Fried is one of nearly 7,000 athletes competing in the Special Olympics World Games taking this week on the USC and UCLA campuses.

He has competed in three World Games — the first being in 1995 in New Haven, Conn.

“I was so nervous at first,” said Barbara Fried, Jonathan’s mother, about his participation. “We had to keep telling him ‘Play like a tiger! You can be friends later,’” she said, describing her son as the consummate gentleman.

In the 2007 World Games in Shanghai, Fried won a gold medal. Four years later in Athens, he earned a silver medal in singles and a bronze in mixed doubles.

The Special Olympics is a marvelous place for getting people to … become aware that they can do things.

“The Special Olympics is a marvelous place for getting people to not just have fun or be with people but to become aware that they can do things,” Barbara Fried said.

It’s this positive perspective that Barbara Fried, who recently donated nearly $500,000 to the USC Division of Biokinesiology and Physical Therapy for rotator cuff research, said the medical world was lacking when she first discovered her son was a child with intellectual disabilities in the early 1960s.

“I was told to put him in an institution and not to have any more children,” said Barbara, who was already pregnant with her second child and had no plans to institutionalize her son. 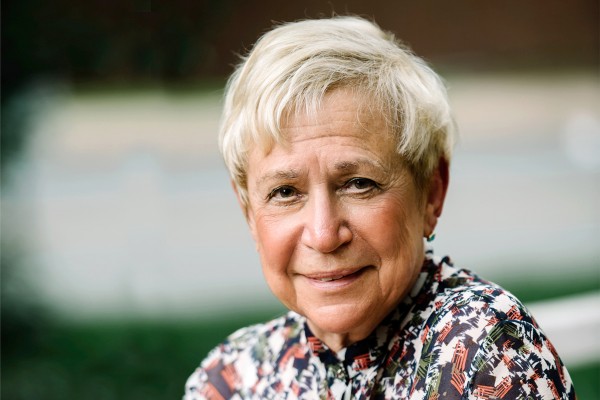 Barbara and her husband Mark, who passed away in 2010 at the age of 78, are longtime benefactors, having given money and time to making education, housing and dentistry more accessible and affordable.

Barbara said she first noticed her son was developing differently when he was not walking or talking at the typical age. He also had strabismus, a so-called “lazy eye,” that had to be surgically corrected.

Though the medical paradigm at the time considered intellectual disability a disease to be managed, Barbara didn’t see it that way.

“Barbara would never really take no for an answer,” Luedeka said, explaining that she refused to accept doctors’ dire prognosis, working with her son every day for years until he was finally able to walk at the age of 2 and a half.

“Doctors would tell you what is wrong, saying your child can do this or that,” she said. “I think the more forward way of looking at it, though, is to say your child is capable with help of doing this and that.”

Barbara explained that she set out to do all she could to instill confidence in her son.

“He wasn’t isolated at all,” she said. “He played on the street with the other kids, and we sort of put everything in the house, including a trampoline in the backyard, so that kids would come to our house and he could be part of that.”

At 20, her son moved to Innisfree Village, a voluntary life-sharing community for adults with intellectual disabilities, which was founded in part by Barbara and her husband.

“That’s when I started to feel like Jonathan would be OK,” she said, explaining that one of the worst fears of parents of children with intellectual disability is how will they survive once their parents die.

For the past five years, Fried has been training with Jon Sarosiek, director of tennis at Wintergreen Resort, to get into fighting shape and perfect his backhand in preparation for this summer’s World Games.

I’ve never been around an athlete more determined and willing to do whatever it takes.

“I’ve never been around an athlete more determined and willing to do whatever it takes,” Sarosiek said.

“I think it’s important that everyone recognizes the hard work these athletes put in,” he added.

Luedeka said he thinks the World Games provide an opportunity for society to challenge its notions about athletes with intellectual disabilities.

“It’s not just about acceptance and inclusion anymore,” he said. “It’s about realizing their human potential and pushing them to be who they truly could be and then they’ll be able to contribute to society at levels we never even thought imaginable.”

A night to remember: Scenes from the Special Olympics opening ceremony

The excited crowd came to the Coliseum for a memorable show, and did not leave disappointed.

Special Olympics World Games poised to be ‘most inspirational event ever’

Nearly 7,000 athletes and 3,000 coaches, representing 177 countries, will compete in 25 Olympic-style sports on the USC and UCLA campuses, in downtown LA and on the Long Beach waterfront.

USC joins all of Los Angeles in welcoming nearly 7,000 athletes from around the world.

Barbara Fried’s donation of $463,000 will further the research that helped her recover from a painful shoulder injury.