Take nearly 7,000 athletes, add tens of thousands of cheering supporters and toss in a good helping of Olympic spectacle. Put it all together in a storied venue like the Los Angeles Memorial Coliseum on a warm California evening, and you’ve got a Saturday to remember.

The Special Olympics World Games opening ceremonies marked yet another time that the historic Coliseum – host of the 1932 and 1984 Olympics – welcomed competitors from around the world.

The biggest star of the night wasn’t a star at all: Michelle Obama, who called the competitors an inspiration.

You’re filling us with so much hope, and you’re uniting us in a way that nothing else can.

“You’re filling us with so much hope, and you’re uniting us in a way that nothing else can,” the first lady told the cheering crowd.

The traditional parade of nations – led by Greece, home of the first Olympic Games – had nearly 7,000 athletes from 165 countries making colorful entries to sometimes boisterous fans, ending with a rousing welcome for the home team.

Maria Shriver — a Trojan mom twice over — remembered her own mother, Eunice Kennedy Shriver, who founded the Special Olympics in 1968.

The evening wrapped up with singer Siedah Garrett performing “Reach Up LA,” which she wrote for the games. The Coliseum’s Olympic torch burned bright as fireworks lit up the sky.

The games themselves actually began earlier in the day, with early morning basketball matchups at USC’s Galen Center. The competitions will continue through the week on the University Park Campus, around Los Angeles and along the Long Beach waterfront. The athletes and fans will return to the Coliseum on Aug. 2 for the event’s closing ceremonies.

The Coliseum – the only stadium in the world to have hosted two Olympics, a World Series and a Super Bowl – is operated by USC under a long-term contract with the city, county and state, which own the facility. 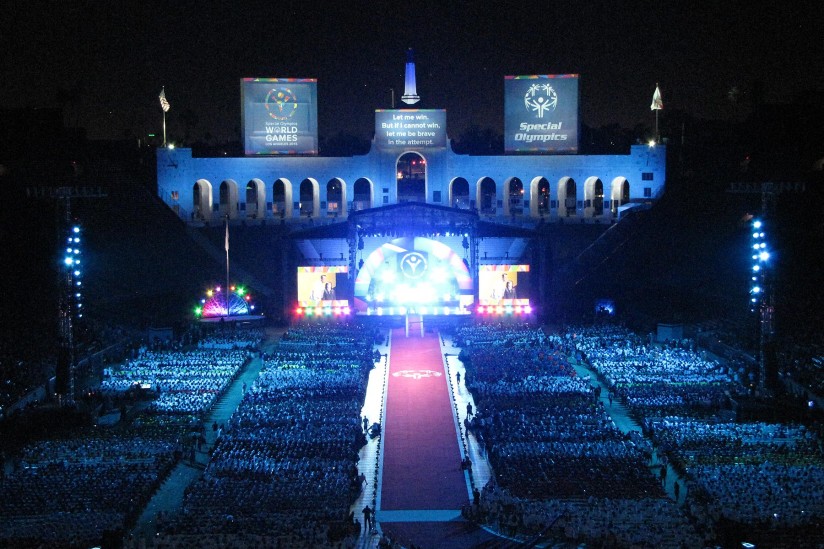 A night to remember: Scenes from the Special Olympics opening ceremony

The excited crowd came to the Coliseum for a memorable show, and did not leave disappointed.

It’s the single biggest sporting event in Los Angeles since the 1984 Olympics.