It started with a magnitude 7.8 earthquake in April, which led to aftershocks that are ongoing even now. All of the shaking triggered what are estimated to be more than 5,000 landslides, frequently with devastating consequences, and now material from these landslides is filling up riverbeds with sediment.

With the advent of the monsoon season — during which more than 40 inches of rain can be expected to drench Nepal from June through September — these rivers are at risk of becoming choked with landslide-derived sediment, potentially flooding low-lying areas and washing away pieces of the nation’s already hard-hit infrastructure.

If persistent flooding makes it hard to rebuild key infrastructure, that could really challenge the country.

“A lot of people live in the mountains in a country like Nepal, and much of their economy depends on mountain tourism. If persistent flooding makes it hard to rebuild key infrastructure, that could really challenge the country,” said Joshua West, assistant professor of earth sciences at the USC Dornsife College of Letters, Arts and Sciences, who traveled to Nepal in June to conduct an assessment of the condition of the rivers and landslides before the rains began.

He already happened to be in the region studying the effects of the 2008 Wenchuan quake, a 7.9 temblor that wracked China’s Sichuan Province and left nearly 70,000 dead. The subsequent landslides killed dozens, and their effects continue to plague the region.

One lesson West and his colleagues learned in Sichuan is that landslide-driven floods can remain a lingering reminder of an earthquake for years, even possibly decades.

But not all landslides — or rivers — are created equal. The size and volume of material that slumps into a river matters, as does the speed at which the river flows and how heavy the rains are that drive it. West hopes that working in Nepal might help inform how long it will take for the rivers in this region to return to “normal” and what that might mean for other places at risk of earthquake-triggered landslides.

Larger rocks need more energy to move, so huge boulders dumped into a river might be there for years. Likewise, heavy rains can swell a river to overflowing quickly, but they will also speed up the river’s flow and can help clear it of debris more swiftly.

Returning to the scene of the grime 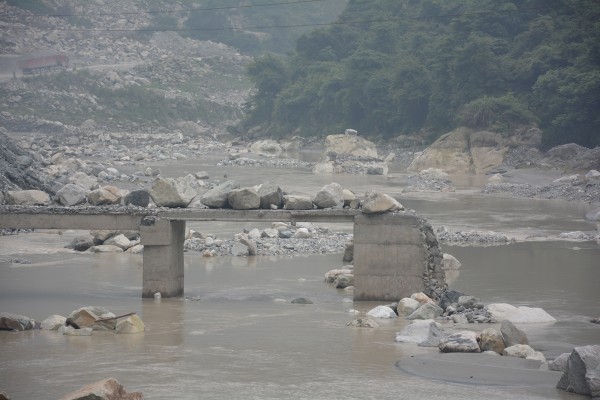 A washed-out bridge in China’s Sichuan Province has been covered by river sediment in the years following a 7.9 earthquake. (Photo/courtesy of Joshua West)

West, who took a preliminary survey in June, will return in October — once the rains slow — and revisit locations that he scouted to study the aftermath.

Working together with colleagues at the University of Michigan, he plans to employ unmanned drones to capture aerial images and airborne LIDAR (3-D laser scanning) to document, in detail, what he finds. In the meantime, he and his collaborators and students will be sifting through thousands of satellite images to identify and map landslides as captured from space.

Putting this information together will allow them to create a detailed map of all earthquake-triggered landslides in Nepal to quantify how much material the landslides have discharged and to assess how much of this material is close enough to rivers to potentially choke rivers and drive flooding.

Contrasting the effects of landslides in Sichuan to those 1,200 miles away in Nepal will help West and his colleagues generate hard numbers to fuel models for sediment transport, and, potentially, related flooding.

For Nepal, understanding of the long-term, post-earthquake exposure to hazards like flooding could be crucial. The nation relies heavily on tourism, which is why West chose to study the Trisuli River, among others. The Trisuli cuts into Langtang National Park on the border with Tibet, a steep valley popular with tourists who trek through the wilderness.

Though this was a tragic event, we can potentially learn a lot.

“Though this was a tragic event, we can potentially learn a lot,” said West, holder of the Wilford and Daris Zinsmeyer Early Career Chair in Marine Studies. “If we understand where the landslides occurred this time, we may get a better understanding of where they’ll occur in future earthquakes. And if we can understand what the knock-on effects are on rivers, and for how long those may last, we can better assess recovery in this region as well as risks elsewhere.

“I hesitate to say that we’re going to come out of this with a predictive model, but we’re hoping to contribute to better understand this sequence of post-earthquake hazards. That understanding may help others to better plan recovery efforts and understand where similar problems may arise in the future.”

The research is funded by the National Science Foundation Geomorphology and Land Use Dynamics Program.

From earthquakes to landslides and potential floods in Nepal