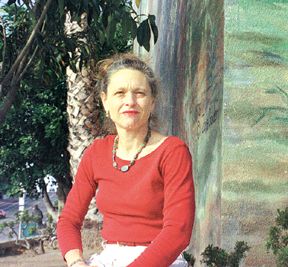 Stephanie Pincetl’s new book takes a look at California’s environmental decline and the reasons behind it. She sits near a Santa Monica mural of a forest painted by artist Jane Golden in 1978.

By all rights, California should have become an environmentalist’s paradise, USC geographer Stephanie Pincetl contends in a new book.

This, after all, is where the Sierra Club and one of nation’s first state parks was founded, she points out in “Transforming California: A Political History of Land Use and Development” (John Hopkins Press, 1999).

Yet, roughly 130 years after John Muir first laid eyes on Yosemite, only 15 percent of the Sierra’s oldest and biggest trees are left, and most bear signs of urban encroachment. More than 90 percent of the state’s coastal wetlands have been lost. Meanwhile, state and federal governments list more than 320 threatened or endangered plant and animal species in California, with an additional 2,350 species now candidates for the federal list.

How could something so right have gone so wrong?

In an era when big government and party politics are popular scapegoats, Pincetl points her finger at a rarely faulted culprit: protections against partisan and government ills.

“Well-intentioned reforms, coming from deeply felt frustration, have crippled the state Legislature and paralyzed local governments,” writes the native Californian, who is a research associate professor in geography and coordinator of USC’s Sustainable Cities Program.

PINCETL REFERS not just to term-limit legislation and other fairly recent manifestations of anti-government sentiment, although she contends they are part of the problem. The seeds for California’s environmental de cline, Pincetl writes, actually were sown nearly nine decades ago.

“The Progressive period laid down the fundamental structures that led, over time and after tinkering, to much of the physical landscape we see today,” she writes.

Wary of East Coast-style political machines and inroads into party politics by railroad monopolies, an ambitious group of reformers rooted partisan elections out of local government in the early 1900s. Great believers in turning over decisions that required specialized knowledge to specialists, members of the Progressive Party established special districts, boards and commissions to set policy in forestry, timber, water and agriculture. Progressives then armed average Californians with the power to take government into their own hands through initiatives, referendums and recalls.

While intended to “sanitize” the political system, these 1911 reforms resulted in the “further distancing of government from the people,” Pincetl writes. With the elimination of local political parties, average citizens lost access to the political institution they had the best chance of shaping and guiding. Into the void stepped a destructive influence: single-issue constituencies.

“The competing interests all wanted something from the state government, but they no longer had the party discipline … or any coordinating mechanism to allow them to reach consensus or establish priorities,” Pincetl writes.

Boards and commissions, whose members could not be recalled (since they were not elected), proved unaccountable to voters, and these “shadow governments” became magnets for industry representatives who invariably favored large agricultural, mining and timber interests as well as suburban development, Pincetl contends. Launching referendums and initiatives, meanwhile, remains only within the reach of groups and individuals with access to large amounts of cash.

Recent attempts to curb politicians haven’t helped environmental matters. Term limits, in Pincetl’s view, only handed over more power to special interests, coming as they did with corresponding cuts in legislative staffs.

Prop. 104, passed in 1990, “has resulted in a continuous cycle of new legislators who have to learn the governmental process,” she writes. “Assembly and Senate members will likely rely on the most informed sources they can surround themselves with – often a special-interest lobbyist whose full-time job is to keep informed on government issues.”

Meanwhile, fiscal restrictions that require two-thirds’ support of the California Legislature leave elected representatives with “little political power to represent the wishes of their electorate.”

“The Progressives intervened at a time of crisis and formulated a vision for the transformation of California,” Pincetl writes. “It is time to do so again. The state has changed, and so should the visions.”