Ho Chi Minh City in Vietnam is known for having sidewalks bustling with action. Street vendors set up shop to sell a variety of foods and merchandise, creating a social atmosphere with people of different classes lingering to chat over snacks and drinks.

To many city officials, it was an unsightly mess that needed to be cleared off and modernized to impress tourists. To USC Price School of Public Policy Associate Professor Annette Kim, it was beautiful.

The sidewalk life in Ho Chi Minh City is so humanistic, so aesthetic and cultural, but they’ve been trying to clear it off because it doesn’t seem modern and seems kind of backwards.

“The sidewalk life in Ho Chi Minh City is so humanistic, so aesthetic and cultural, but they’ve been trying to clear it off because it doesn’t seem modern and seems kind of backwards,” said Kim, whose new book Sidewalk City: Remapping Public Space in Ho Chi Minh City takes a look into the value and potential of the contested public space.

“I wanted to frame it differently, and I think that’s where visualization is really helpful.”

Kim, who was born in New York and raised in Southern California, made her first of many visits to Ho Chi Minh City as a doctoral student in 1996.

A lot of change in a short time

She conducted most of the research for the book in 2010. But when she returned in 2014 to present some of the research in an exhibition titled In Celebration of Outdoor Activity Culture, she found that much had changed in just a few years. 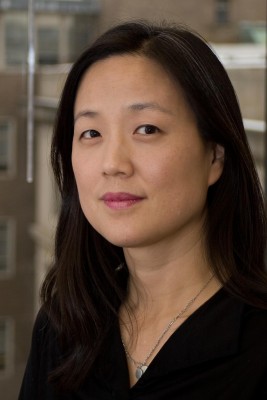 Annette Kim is an associate professor at the USC Price School of Public Policy. (Photo/courtesy of Annette Kim)

Police had increased enforcement of a clearance policy, levying fines and seizing vendor goods. But since most of this happened between 9 a.m. and 5 p.m., vendors came out early in the morning, then scrambled to pack up everything five minutes before 9. The cat-and-mouse game between vendors and police had led to some bloody confrontations. Kim was saddened to see that some vendors who had been in the same spot for decades were gone.

Coverage of her exhibition from Vietnam television, radio and the front page of the Sunday edition of Vietnam’s largest newspaper helped spark a public discussion of reconsidering what is being done to the sidewalks. Recently the city opened its first pedestrian-only street, but Kim fears it may exclude lower-income people.

She is planning another exhibition in partnership with the USC School of Cinematic Arts in September.

Research on the Ho Chi Minh City sidewalks sparked Kim’s interest in critical cartography, which when applied to public policy and urban planning bring attention to overlooked spaces and people. Earlier this year, she launched the Spatial Analysis Lab at USC Price.

The crux of the book is a primer of critical cartography with map after map making a visual argument for how we can see new phenomenon by altering how we map.

“I hope people can see the amazing possibilities of what a map can do if we start playing with the rules,” Kim said. “By adding a time dimension and not committing to one static location, you can capture so much more of what happens in a space.”

Visual tools such as pictures and video enhance the school’s commitment to social justice and equity.

The university remains committed to diversity at all levels as a summer group completes another successful event.