It’s a simple premise: Bring together 20 doctoral students from across the country and put them in a room with faculty who study the same subject. That’s the goal of the USC Annenberg School for Communication and Journalism’s Summer Institute for Diversity in Culture and Media. 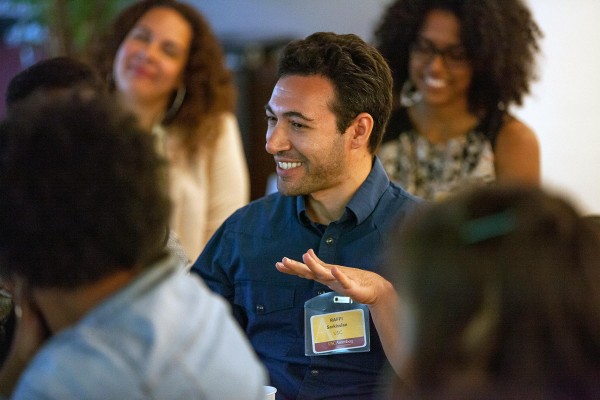 USC doctoral student Raffi Sarkissian introduces himself to faculty and doctoral candidates from across the country. (USC Photo/Brett Van Ort)

“It’s basically kind of a weeklong workshop-type institute-camp that’s a combination of graduate students from around the country and faculty from here at Annenberg, and from other places and universities as well,” said Raffi Sarkissan, who presented his research on the Los Angeles LGBT film festival Outfest during the program.

Sarkissan, a fourth-year USC Annenberg Ph.D., is one of the 20 students who participated in the June 15-19 institute. He joined colleagues from institutions like the University of Pennsylvania, the University of Washington and the University of California, Berkeley; they were received by USC and visiting faculty for an intensive dissection of the media’s portrayal of racial, ethnic, sexual and gender diversity.

Sarkissian, who grew up in Los Angeles with Armenian immigrant parents, embraces both his self-professed queer identity and his Armenian heritage.

Of the importance of diversity, Sarkissian said, “It’s such an integral part of what I do, it’s hard to say something specific about it. But we live in a constantly mediated culture, and it’s really important to look at how that culture’s being produced and who’s producing it.”

Manouchka Labouba, a fourth-year doctoral candidate at the USC School of Cinematic Arts from the central-African country Gabon, agreed that there needs to be better representation.

You need to see something that looks like you on TV, otherwise you feel like you don’t exist.

“It comes with a sort of self-identification and self-perception. You need to see something that looks like you on TV, otherwise you feel like you don’t exist,” she said.

That kind of discourse is exactly what led School of Communication Director Sarah Banet-Weiser to start the summer doctoral diversity institute last year.

“We wanted to build community with students so we can actually establish a network and a coalition of people who are doing this kind of really important work,”  Banet-Weiser said.

This year she co-directed the program with Professor Josh Kun, who described the program as an incredible working environment for students to focus on issues of diversity — but also said it served as a safe haven for a unique kind of workshopping.

“We really hope that the Annenberg institute is an opportunity to focus on these issues in ways that might not be possible in other places,” Kun said.

I’ve learned a lot from the student presentations, and hopefully they’ve learned from the comments I’ve made.

“We have a lot to learn from each other,” Hunt said. “I’ve learned a lot from the student presentations, and hopefully they’ve learned from the comments I’ve made.”

In addition to learning from faculty, the doctoral students leaned on each other for support.

“Honestly, I feel like I can learn something from everybody, when it comes to just their perspective,” said Victoria Thomas, a first-year Ph.D. student at the University of Washington.

The institute covered a broad array of topics, including transgender representation on television, portrayals of disability and diversity in the STEM (science, technology, engineering and math) fields. But with the evening news peppered with videos of police brutality against black Americans, and South Carolina still reeling from the Emanuel African Methodist Episcopal Church shooting, conversation naturally turned to current events.

“My personal approach to academic scholarship is that it means nothing if it’s not open and in immediate dialogue with what’s happening beyond these doors,” Kun said. “Obviously what happened last night is something that I’m guessing will be central to our talks today.” 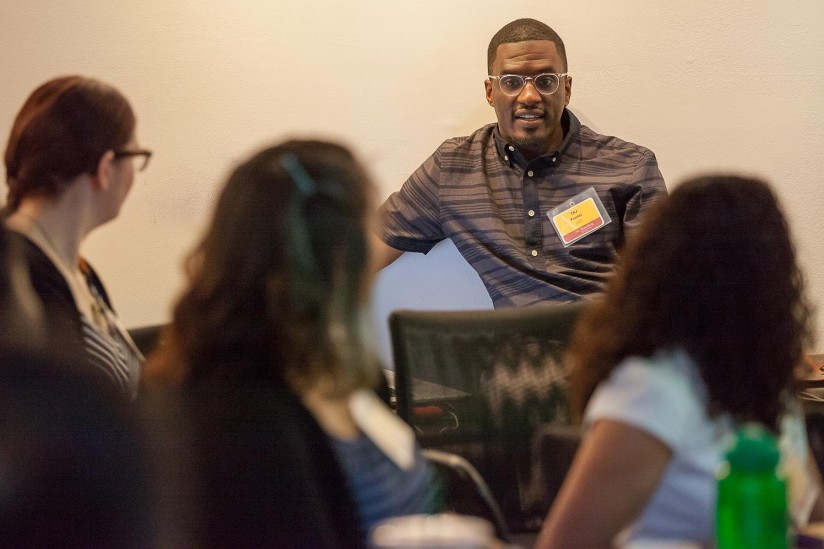 USC Annenberg faculty member Taj Frazier introduces himself to doctoral candidates from across the country during the 2015 Summer Institute for Diversity in Media and Culture. (USC Photo/Brett Van Ort)

Willow Bay stays ahead of the curve

USC Annenberg School of Journalism director recalls the path that led from modeling to an MBA and much more in and out of newsrooms.

Minorities are expected to more than double their population in the next 40 years, D.C.-based senior fellow tells USC Price students.