To hear his friends tell it, Andrew Guzman probably would have launched a tech startup if he hadn’t gotten a law degree and gone into academia. Innovation and drive run through his veins.

Guzman recently left his longtime academic home of the University of California Berkeley School of Law to become the new dean of the USC Gould School of Law, and he’s bringing his entrepreneurial spirit with him from the Bay Area.

The legal landscape is changing and we have to respond.

“I think top law schools know that we have to approach the future of legal education differently,” said Guzman, an authority on international law and economics who holds a J.D. and Ph.D. from Harvard University. “The legal landscape is changing and we have to respond. Nobody knows exactly how things will look in five or 10 years, but it will be different than it has been in the past. To thrive, law schools have to be creative and maybe try some new things that, while not guaranteed, have the potential for a big payoff.”

Guzman began as a junior faculty member at Berkeley Law only two years after finishing law school and rose through its ranks to spearhead the school’s international and executive legal programs. He took the international education program from a tiny staff with a few students to one of the most respected programs in the country. Today it boasts a $15 million budget. The program offers a range of specialized trainings for legal professionals and executives, preparing them for the real-world challenges of a dynamic global environment.

His collaborative approach with faculty and staff inspired a strident loyalty. Amelia Miazad has worked with Guzman, building Berkeley Law’s “International and Advanced Programs” office (IAP) from nearly the ground up. She said that Guzman has a flair for breaking down hierarchies.

“Andrew does not act as if he has a monopoly on good ideas,” said Miazad, executive director of the IAP. “He inspires action and has an imaginative approach to problems. Our office sometimes feels like a ‘startup’ within the law school. There is an enthusiasm and entrepreneurial spirit that infuses even our most routine processes. This culture is a reflection of Andrew’s leadership.” 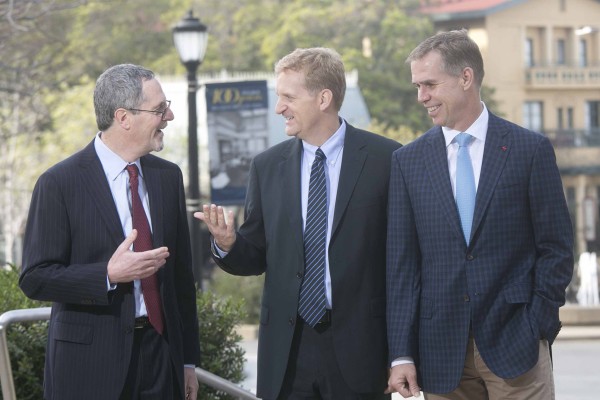 Eric Talley, one of Guzman’s closest friends and colleagues at Berkeley Law and a former USC law professor, said Guzman is ingenious when it comes to getting around bureaucracy.

“He doesn’t think much of rules that prevent you from doing great things,” Talley said. “Andrew is a really smart and creative scholar who approaches problems differently and collaboratively.”

Charles Weisselberg, Berkeley Law’s founding director of the Center for Clinical Education, who worked at USC Gould until 1998, said Guzman’s scholarly interests are a good fit for USC.

“He is an internationalist and he cares deeply about the quality of his scholarship and the scholarship of his peers. He’s very supportive of other faculty members in their research and writing. I know his mentoring has played a very important role in the development of our junior faculty.”

As the first Latino dean of USC Gould, he wants to make his father proud.

“My father was sent to boarding school in Canada at age 13, by himself and not speaking a word of English,” he said, explaining that a repressive dictatorship made it dangerous to stay in the Dominican Republic. “My father had to adapt to a completely alien country and way of life while barely a teenager. His story motivates me. You can see his pride when he recounts the story of not only learning English from scratch, but winning the school’s English literature award when he graduated from high school.”

Guzman intends to continue the positive momentum set by former Dean Robert Rasmussen of growing the quality and reputation of the law school. At the top of Guzman’s list is to recruit senior faculty, leverage the entertainment law and international programs and capitalize on the newly launched Alternative Dispute Resolution Program, which received a $5 million gift from Judge Judith O. Hollinger ’61 in January.

Achieving these goals may come from doing what he loves best —thinking outside the box. When recruiting faculty, he plans to identify top-notch professors in less-sunny regions of the country — like Ann Arbor, Chicago and Nashville. Guzman plans to use that same approach when recruiting junior faculty.

The USC law faculty is highly collegial, and that is a huge plus academically.

“USC is an easy sell,” he said. “The USC law faculty is highly collegial, and that is a huge plus academically. We are interdisciplinary, and our student class size is small so you can really get to know your students. We also are housed in the enormously successful institution of USC. And it does not hurt that we will be inviting the faculty we recruit to live in a great city with a terrific quality of life.”

And located in the heart of Los Angeles, Guzman wants to broaden the school’s entertainment law portfolio.

“The intersection of technology and entertainment is important nationally,” he said. “In a perfect world, we would not only focus on entertainment in the Hollywood sense, but also sports law, intellectual property, technology, cybersecurity and privacy law. USC is already strong in these areas, but could also get stronger and really establish a brand.”

How to expand USC Gould programs

In international law — an area Guzman knows best — he wants to enhance and expand USC Gould’s programs in a “thoughtful, but ambitious way.”

“There are many things we can do to increase our contact internationally — beyond the LL.M.,” he said. “There’s an opportunity to provide legal training and legal teaching and to connect scholarship and academic interest with what goes on with the rest of the world.”

A loftier goal is to increase Gould’s ranking.

“As the second-largest city in the country, Los Angeles cries out for a top 10 law school, and my intention is to move USC Gould in that direction,” Guzman said.

“There is no better person to lead this law school than Andrew Guzman,” said Rasmussen, who finished an eight-year term at the law school this summer. “I have known and admired Professor Guzman for over 15 years. He is a wonderful teacher, a leading international scholar and a talented administrator. Under his leadership, the USC Gould School of Law will continue to advance among the ranks of the nation’s finest law schools.”

Beginning of a new adventure

Guzman’s wife, Jeannie Sears, and two school-age sons, Nicholas, 15, and Daniel, 12, are looking forward to exploring all of Los Angeles’ offerings — both cultural and fun.

“We see it as our next big adventure,” Sears said. “What’s not to like about LA? It’s got great food, great weather, and it’s geographically well located.” 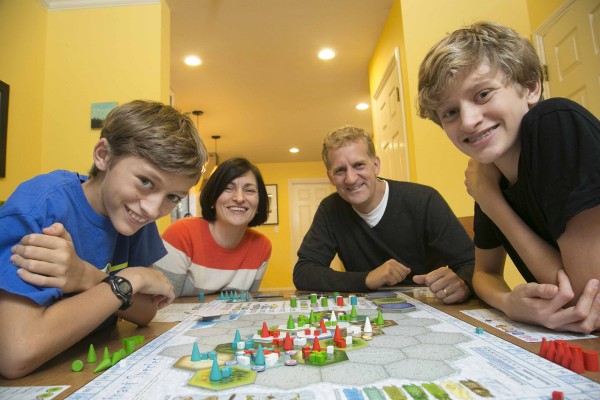 Married for 21 years, Guzman and Sears met as first-year college students in 1986 while serving as pages in the Canadian House of Commons. She earned her law degree at Queens University, in Kingston, Ontario, Canada, and worked as an attorney in bank finance, secured lending and equity investment at Bingham McCutchen in Boston while Guzman earned his Ph.D. in economics and later his J.D. at Harvard.

The couple enjoy exploring new restaurants, entertaining friends at home and occasional “binge watching” of television shows — House of Cards, Downton Abbey and Sherlock are among their favorites.

Sears said the family is prepared for the busy lifestyle Guzman faces as the new dean. Leading a law school is a dream for Guzman and a leadership position he is fully prepared for, she said.

“He’s good at seeing the big picture, and he doesn’t get flustered,” she said. At a big university like Cal, people would say ‘That’s too hard to do’ or ‘Nobody has done that before.’ Six months later, Andrew would have done it. He is good at working around problems and figuring out how to get from here to there even if somebody says he can’t.”

Guzman said that’s exactly what he’s looking forward to in his role as dean.

“In an institution full of accomplished and driven people, the dean’s job is to make it easier for them to thrive. That means finding out what is getting in the way and removing it, and seeing what will make them even better and building it.”

Andrew T. Guzman, an expert in global economics and interdisciplinary research, will assume his new post in July.

This year’s projects focus on tax preparation and immigration screening.

The first step on the road to a law career

The little wager that led to a big law career

USC alum aces a law school test and ends up managing a practice in which he fights for the underdog.